The Republic of Philimania, commonly called Philimania, is a federal republic governed by The Philimanian Legislative Council (TPLC) in Western South America. Philimania covers over 20 thousand square kilometres and has a population of over 5 million. The nation consists of 4 provinces.

Philimania was first inhabited by native Polynesians before its founding. Philimania was founded in 1603 by British explorers who were hoping to discover new land for the British Empire west of The Americas, unfortunately, their ship sank in a storm. The survivors managed to get on to the island where they settled down and named it Philimania after the native islanders.

Philimania is a developed country, with a high national GDP of P$1.342 trillion. The per capita GDP of P$30,120 ranks highly in the world. The economy is fueled almost entirely by the private sector, which is quite specialized and led by the Tourism industry, with significant contributions from Book Publishing, Information Technology, and Arms Manufacturing. The average income is 65,825 dollars and evenly distributed, with the richest citizens earning only 2.7 times as much as the poorest. Philimania ranks highly in civil rights, political freedom, and economic freedom. Philimania is a small power, as well as a member of several international organizations, including the United Nations.

The national animal of Philimania is the Wee-Wee Fish which is a type of fish that is only found around Philimania. The term 'Wee-Wee' comes from the person that discovered this species who is known as Hilda Wee-Wee.

The term 'Philimania' is believed by historian to have come from the name of the Polynesian tribe that once lived on the island.

Philimania was first settled by Polynesians around the 700 AD. The islanders lived in relative peace until the islands were discovered in 1603.

When the explorers landed on the islands in 1603, they were greeted by the natives. The native islanders, being peaceful people, welcomed them. The stranded explorers made friend with the natives and they learned to adapt to the local environment and survive. By 1654, the British and the natives have merged into one type of people and founded the Republic of Philimania, after the chief of the Polynesians at that time.

In 1686, the Philimania is discovered by Spanish Explorers. Philimania eventually opened trading posts along the coast to trade with the Spanish, and eventually Britain and France in 1700. During The Seven Years War, Philimania sides with Britain, managing to seize the Spanish occupied island of Largoia later known as Long Kingdom with insignificant losses.

Following The Seven Years War, in 1768, Philimania's economy started to deteriorate. So on July 23rd in that year, the president at that time, Kareen Rallington passed an act known as the Comertua Act, it states that taxes in Largoia would be raised by 20% and that Philimanian goods bought or sold would cost twice as much. The Largoian were not at all happy.

On August 6th 1768, Largoian revolutionist Adrián Espejo and around 500 other Largoians took to the streets of Browningham, the new capital of Largoia. After a series of protests, the Philimanian soldiers were sent in to deal with the protesters. as soon as the army entered the city, rocks were thrown at them. The soldiers, overwhelmed by the number of protesters, fired. 53 protesters were killed and this event would be known as the Browningham Massacre. The news of this event spreaded like wildfire throughout Philimania. The Largoian were outraged, so they armed themselves with weapons and revolted against Philimania. 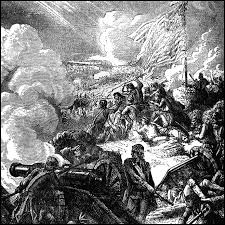 Drawing of the Battle of Phorktown Hill a battle in the Long Kingdomian Revolution 1769.

After the war, in 1771, a new city named New Phork was built by Henry Phork to the north of Phorktown. New Phork became the new capital in 1899 by president Mahad Sanders.

3 centuries came and went and nothing eventful has really happened until December 6th 1978 when Philimania joins the United Nations. Then, on June 27th 2005, the capitol building in New Phork was bombed by Muslim terrorists, killing 5 people. Luckily, no one important was killed.

The land area of Philimania is 13,937 mile² (22,431 km²) and it is bordered by the Pacific Ocean on all sides. The tallest point in Philimania is Mount Phanes standing at 976 meters in the West of North Philimania. The lowest point is Harodan Valley with an elevation of -32 meters. The entirety of Philimania is covered in the jungle known as the Harodan Rainforest. The Longest river is Brades River whcih runs from Mount Naro to the west coast of Philimania.

Philimania experiences a humid tropical climate with generally cool temperatures and plentiful rainfall all year round. 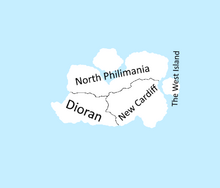 Philimania has an estimated population of over 5 million. While the birthrate is only 5 per 1000, the population growth rate is 5%, the result of immigration. The largest ancestry groups include Philimanians and Hispanic groups. around 60% of the population are Philimanians, 34% are Hispanic, and 6% are other races.

The majority of Philimania's population identifies as Christian. 57% identify as Protestant, with 29% identifying as Catholics. The nonreligious account for 10% of the population, while Jews make up 2.1%. All other faiths collectively make up 1.9% of the population. The 6th Amendment of Philimania guarantees religious freedom and prevents legislation that favours any religion over another. In addition, discrimination based on religion is illegal, with the exception of explicitly religious organizations such as churches.

The Republic of Philimania is a constitutional federal republic. The Philimanian Constitution is the supreme law of the land and closely models the US Constitution on which it was inspired.

The citizens of Philimania are subject to three levels of government: federal, provincial, and local.

Federal Government: Responsible for national defence, foreign policy, and guarantees basic human rights that the provincial or local government cannot override. It is also responsible for regulating international commerce. Since 1986, the Department of Science has been responsible for coordinating and funding scientific research into a wide array of fields, notably nuclear power and weaponry, space technology, and renewable energy.

The federal government is composed of three branches:

Legislative: Made up of the Legislative Council and the House of Representatives. Makes federal law, declares war, allocates federal funds and approves treaties.

Judicial: Made up of the Supreme Court and lower federal courts. Has the power of judicial review, and is the highest legal authority after the Constitution.

Philimania is a member of the United Nations and the region of The East Pacific. With the exception of The Seven Years War and The Long Kingdomian Revolution, Philimania has been officially neutral in all armed conflicts since its founding.

The total Philimanian Armed Forces spending in 2021 is 44.2 Billion.

The commander-in-chief of the Philimanian military is Muskaan Velasquez, who is head of the Ministry of Defense. The military is divided into three branches: the Air Force, the Navy, and the Marines. All of these branches serve professionally and have no other occupation. In the event of a war, the Philimanian Army is to be reestablished and made up of volunteer troops. Conscription is illegal under the Philimanian Constitution.

Philimania has a GDP of P$1.342 trillion and a GDP per capita of P$30,120. The nation operates under a system of free-market capitalism. The private sector is estimated to constitute 91% of the economy, with federal, regional, and local government accounting for 8.1%. Unemployment is at 0%, largely due to excellent employment regulations throughout the country.

The Economy in the last 40 years

Philimania is one of the world's largest exporter of tropical fruits. Australia is its top trading partner, followed by The United States, China, The United Kingdom and Japan.

Tourism is currently the nation's largest industry, followed by Book Publishing, Information Technology, and Arms Manufacturing. Mining and retail are other important drivers of the Philimanian economy.

Philimania is home to a variety of cultures, a result of a liberal immigration policy. Philimanian culture is generally considered Western, derived from traditions of European and Polynesian culture. There are also large Hispanic and Afro-Ecuadorian populations. Like other American nations, Philimania has been described as a melting pot where several cultures join into one.

Philimanians have been described as very compassionate, hard-working, and competitive. This has resulted in great economic productivity and a libertarian form of government. This has also made Philimania a popular destination for immigrants. Philimanians are also firm believers in equality and do not think that one social class should have more rights than others.

Philimania's market for professional sports is roughly P$16 billion. While the most popular spectator sport is football (soccer), the national sport is considered to be Basketball. Philimanian athletes have set several world records and won 340 Olympic medals in athletics alone. Philimania also hosted the 2018 FIFA World Cup. In addition, the 2000 Olympic Games were held in Phorktown. Hockey, baseball, and tennis are also popular sports.

Personal transportation is dominated by automobiles, which operates on a system of 21,564 miles (34,703.894 kilometres) of roads. Philimania has one of the smallest automotive industries in the world.

There are no public transport systems. Bus, rail, and subway systems do exist, but they are privately owned and operated. Many people in urban areas walk or bike to work to avoid traffic and transit fees.

The civil airline industry is also privately owned. Unlike most other industrialized nations, most airports are privately owned and run. Foster International Airport is one of the busiest in America, serving not only Philimania, but airlines in Ecuador, Peru, and Columbia as well.

Philimania uses a high amount of energy per capita. About 70% of Philimania's electricity comes from nuclear power plants. Other electricity sources are from vast natural gas and coal reserves, and from solar energy. Most of Philimania's transportation sector uses hydrogen.

Retrieved from "https://iiwiki.us/mediawiki/index.php?title=Philimania&oldid=356002"
Categories:
Hidden categories:
This page was last edited on 6 June 2021, at 09:54.
Privacy policy
About IIWiki
Disclaimers