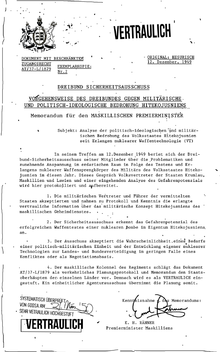 Operation Clearsight (Hesurian: Operation Freisicht; or Project Glasses (Projekt Brille)) was a surveillance, reconaissance and counterintelligence program that was initiated by and originated in the BDTA Security Committee and the Mascyllary Army's Intelligence Division (later absorbed by the Agency of Strategic Reconaissance) of the Mascyllary government on 12 December 1949, which ran until February of 1959. The plans called for the intelligence agencies of the BDTA countries to commit espionage within the military and political apparatus of the State of Cuthland after it had developed and successfully tested nuclear weaponry in 1949. The project was finalized by Prime Minister Ernest H. Rähner.

It was intended to decrypt messages transmitted by Hytekojuznia's military and to analyse the expectable scope of its military size and capabilities for an eventual conflict. Its work included the decryption of thousands of messages, the initial discovery of the nuclear arsenal, and its signals intelligence helped design the first Mascyllary nuclear weapon in 1950.

The operation's conclusions confirmed and amplified the "suspicion of Hytekojuznia being a prone threat to Erdaran peace and sovereignty", as stated in its memorandum. Even though parts of especially the Mascyllary government were eager to draft it into execution, significant resistance from politicians hindered it at first. Most notably, Maximilian I spoke out against it, fearing an "escalation of tension and risking a conflict which Hytekojuznia would, because of its nuclear liability, win". The project start subsequently marked the beginning of the Great Game in Erdara. Operation Clearsight remained highly classified for more than 30 years after its closure. Its declassification was only achieved under public pressure after the collapse of Hytekojuznia in 1990.