Audonia's official policy during the First Great War was that of neutrality, guarenteed by its distance from the primary theatre of war and that it was surrounded by Coalition-aligned nations, including active participant Amandine. For much of the war, however, the Audonian military was held at a partially mobilised state in the event that the state was dragged into the conflict, occaisionally being raised to full mobilisation during times of crisis. Despite its official policy, Audonia supplied and assisted the Galene League both openly and secretly, activities that often brought the state close to conflict with its neighbours, activites that often remain classified to the modern day. Historians often refer to Audonia's situation in the war as 'neutral in name only'. (See more...)

See You At Ten is a children’s book written by Rythenean author Ermina Arlette, and was published by Green Dove on 29 October 1977. Illustrations for the book were provided by Glenn Heaton, who also worked on a number of Arlette’s other stories, including; Dancing Left, Old Flag, New Flag, Cousin George, and New Blue Suit. The book is Arlette’s fifth highest selling text of all time, having sold over eight and a half million paperback copies worldwide. The plot of the book is centred around the temperamental Lord Chamberlain of the household, who becomes increasingly infuriated whenever a new guest arrives early to a banquet. The protagonist eventually realises that they were acting irrationally and apologises to the guests, having learnt that some things do not always go as planned. When asked in interviews, Arlette often stated that she believed “adaptability” was the main moral of the story. (See more...)

Robert Morris (March 27 1781 - 11 July 1841) was an Audonian statesman, military commander, founding father, and writer who served as the first President of Audonia from 1817 to 1826. Prior to that, he had led Audonia to independence over a period of 13 years. He oversaw both the Audonian Senatorial Founding and the reconstruction of the federal government, turning it from a purposefully weak government into a centralised and strong government. He has often been referred to as the Father of the Nation due to his efforts in organising the nation both prior and post independence. (See more...)
Nation Spotlight

Albrennia, officially the Commonwealth of Albrennia, colloquially often simply the Commonwealth, is a sovereign state and presidential republic in Northeast Marceaunia Major. Situated on the Albren Peninsula, of which it is geographically coterminous, Albrennia is bordered by the Hesperian Ocean to the east, north, and south; by the Gulf of Colrain to the southwest; by Rowlands Bay to the northwest; and by the Lamont Range and [???] to the west. The Commonwealth is a unitary state consisting of of eight major metropolitan administrations and 4,352 rural townships, which together cover an area of 2,019,286 square kilometers (779,650 sq mi) and encompass an estimated population of 80,631,224. It is the fourth-largest nation in Levilion by population, and the sixth-largest by area.

The Albren Peninsula was inhabited by North Marceaunian indigenous peoples from at least 3000 BCE. In 1460, the Rythenean explorer Rufus Albren discovered the peninsula, and all of Marceaunia along with it. From 1504, Rotiferist colonists from Rythene, committed to a heterodox and predestinarian strain of Perendism, settled the Albren Peninsula and established the oldest Auressian society in the New World - driving the indigenous population west of the Isthmus of Lamont in the process. Albrennia remained a Rythenean colony for more than three centuries, but its republican government enjoyed substantial autonomy, and it became a center of global trade with a renowned merchant culture. It supported the Rythenean Revolution, contributed directly to the Rythenean war effort, and was granted independence in 1816 at the Congress of Vedayen in order to weaken Rythene's colonial empire.

In the nineteenth century, Albrennia rapidly industrialized and became a major hub for immigration from Auressia and Marceaunia Minor. It intervened repeatedly in Marceaunia Minor: pioneering a new brand of economic imperialism based on private companies' control of natural resources, and developing one of the world's most powerful navies - known simply as the Fleet - to defend its far-flung holdings. In the Panic of 1876, Albrennia suffered a devastating economic collapse, in the wake of which its economy became dominated by a small number of enormous, vertically integrated corporate conglomerates: the Pillars. The dominance of the Pillars generated a wave of labor unrest, finally resolved by the development of the economic and political structure known as the Matthean System. Albrennia was a member of the Coalition in the Great War and again in the Second Great War, and its naval power made an important contribution to victory in both conflicts. By the end of the twentieth century, Albrennia was a global center of finance and manufacturing, a naval power with reach across Levilion, and a key player in the global economy with interests and investments on every continent. 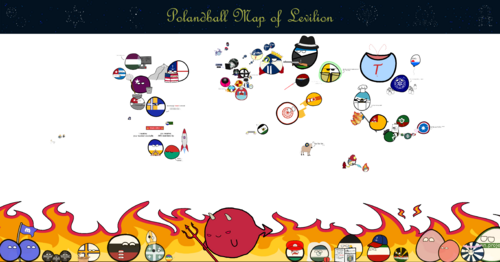 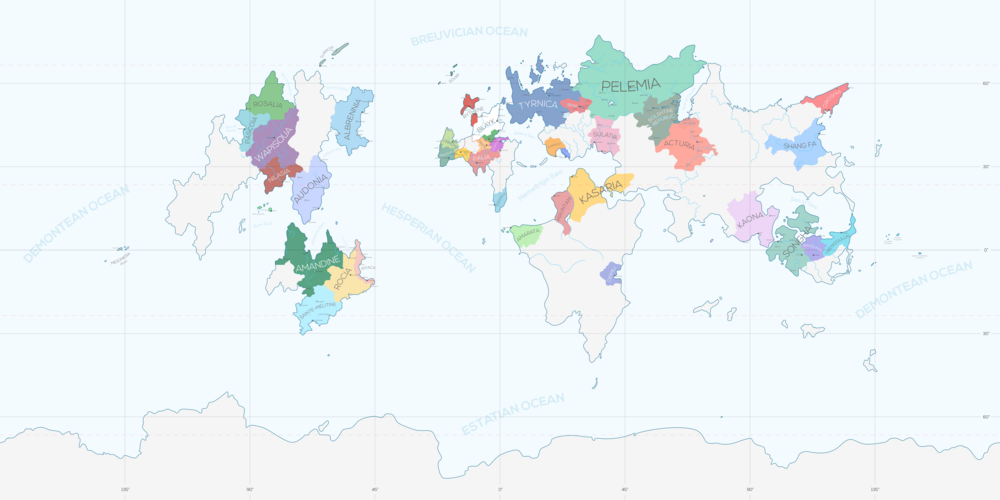