The region that now comprises present-day Tyrnica has been inhabited by ancient humans since 600,000 BCE, and by Isaric peoples since approximately 700 BCE. The Sabarine Empire had established tributary states in the area by 100 CE, and formed a provincial government during the 4th century. In 463 CE, Audun I became the first King of the Tyrnicans, which contributed to the Fall of Sabaria and the end of Antiquity in Auressia. During the Middle Ages, Tyrnica was gradually united over several centuries as part of a period known as the Vereinigung (“unification”), until Tyrnica entered a personal union with Kürskäringar in 1479. The first Tyrnican colonies were established towards the end of the 16th century, and its colonial empire would go on to rival that of other Auressian powers.

In the early 19th century, Tyrnica orchestrated the Compromises of the Great Upheaval and supplanted the authority of Blayk and Rythene to become the global leader in cultural, military and economic influence. This state of affairs persisted until the ratification of the Treaty of Arden in 1913, which ended Tyrnican involvement in the Great War. Thereafter, Tyrnica’s status was reduced to that of a pariah state until its participation in the Second Great War restored relations with its neighbours. Over the course of the late twentieth and early twenty-first centuries, Tyrnica has maintained a stable position on the global scale, undergoing a process of decolonisation and rapid economic growth.

Tyrnica is a developed country with the world’s second-largest economy by nominal GDP and the fourth-largest by purchasing power parity. It is a high-income social market economy that places emphasis on arms, automobile and technology manufacturing, with a burgeoning service sector. The nation also holds the third-highest Human Development Index rating in the world, and performs favourably in a number of national performance listings including health, education, quality of life, economic freedom and the protection of human rights and liberties.

The Grand Kingdom of Tyrnica is a great power that wields considerable influence across the globe, maintaining the ability to engage in power projection. Tyrnica is a founding member of the Commonwealth of Northern Auressia as well as the Auressian Community, and participates in a number of other intergovernmental organisations dedicated to global peace, security and development. Its military expenditure is the sixth-highest in the world, and despite being a recognised nuclear weapons state, it expressed possible commitment to a nuclear disarmament programme in 2016. Tyrnica is renowned as a cultural nexus and is the birthplace of many varieties of the arts, philosophy, science and music.

Etymologically, the name Tyrnica is a Sabarisation of the native Týrland, which is in turn derived from the name of the most prominent deity in Isaric paganism. Ultimately, the term stems from *Dyēus, which was the name of the proto-Auressian chief deity typically associated with the daylight sky.

The Tyrnican region is believed to have been occupied by ancient humans since 600,000 BCE. The Virkaevahn Man is well-known for being one of the oldest and most well-preserved examples of early human life, while ancient flutes and pipes show the existence of musical instruments in Tyrnica as early as 48,000 BCE.

The earliest emergence of proto-Isaric peoples can be traced to the late Bronze Age in the vicinity of modern-day Velcalår. Archaeological, genealogical and linguistic evidence suggests that circa 700 BCE, the inhabitants of the area began to take on an increasingly homogeneous profile as the population grew larger. During the same time period, the coastline of south-western Tyrnica was settled by Savolian city-states who established colonies in order to trade with the local inhabitants. By 100 BCE, cooling weather conditions necessitated Isaric peoples to settle on the Tyrnican mainland, spreading across Central Auressia and displacing the Rubic tribes of the region before coming into contact with the Sabarine Republic. Sabarine ambitions in the area were curtailed by a series of internal crises leading to the establishment of the Empire, although several Tyrnican tribes had been reduced tributaries by 100 CE.

The assassination of Septimus Taurinus in 463 proved to be the catalyst for Audun's decision to declare himself King of the Tyrnicans; in Sabaria, the subsequent power struggle within the Senate forestalled any attempts to re-establish imperial control over the Tyrnican states.

Audun I, the first King of the Tyrnicans.

Tyrnica is located in Central Auressia, sharing maritime borders with Blayk to the west (although the two countries are connected by the Arden-Karsfjord Crossing). It is enclosed by the Northern Ocean and the Galene Sea, as well as the Strait of Khovaar which separates Central and Western Auressia. The territory of Tyrnica spans approximately 2,199,498 km² (849,231 sq mi), making it the largest country in Auressia by surface area and the 5th-largest in the world. 2,176,918 km² (426,198 sq mi) of its area is land, with 22,580 km² (8,718 sq mi) consisting of water in the form of perennial rivers and lakes. 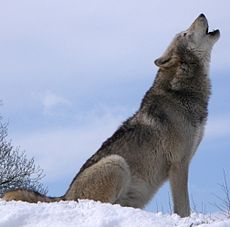 Tyrnica is a unitary parliamentary constitutional monarchy, operating under a legal framework established as part of the Constitution of Tyrnica. Until its codification in the aftermath of the Great War, the Constitution was made up of a number of documents and Acts of Parliament; since 1914, it has been amended on seven occasions through the process of a referendum. While Tyrnica does not have a bill of rights, the Constitution itself guarantees Tyrnican citizens a number of enumerated and unenumerated rights, acting as a limitation on the law-making power of Parliament.

The Tyrnican government is made up of three branches, in accordance with the constitutional principle of seperation of powers:

The Tyrnican language is sole the official language of Tyrnica, and is also its most commonly-spoken language. Tyrnican is a Western Isaric language, closely related to Rythenean. It is more distantly related to the Northern Isaric languages including Kürskäringan, which constitues a regional language in Kürskäringar and Mijörlicht. Additionally, the regional language of Evzenia also has administrative status within the boundaries defined by the Sprachakademie ("language academy").

It is estimated that 86.0% of Tyrnican permanent residents speak the language natively, with the remainder usually speaking a regional language. A 2018 survey conducted by the Sprachakademie showed that 68.9% of Tyrnicans indicated a proficiency in two or more languages, with the most common second languages including Rythenean, Kürskäringan and Principean. Standard Tyrnican is based on a dialect of High Tyrnican and is common along the nation's Völkgürtel, while Low Tyrnican is typically spoken along the coastline of Umbrecht and in Grênstedt.

Historically, Tyrnican served as a lingua franca and was particularly seen in this capacity during the 19th and early 20th centuries; significant Tyrnican-speaking communities remain in Audonia, Sarbéliard (Särpelgard Tyrnican) and Avilême as a result of its widespread usage. Its continued relevance on the global scale has resulted in its adoption as one of the three official languages of the Commonwealth.

Retrieved from "https://iiwiki.us/mediawiki/index.php?title=Tyrnica&oldid=293785"
Categories:
Hidden categories:
This page was last edited on 31 December 2020, at 22:05.
Privacy policy
About IIWiki
Disclaimers