The party is considered centre-left, and have at various points provided informal support to SAP of the 21st century, though they have consistently criticised the party's stances on environmental policy. They won a record vote in the 2009 federal elections after the party came out against the adoption of neoliberalism by the two main parties, though its adoption was denied by SAP leaders and became a point of controversy between the two parties. Currently, the party holds 12 seats in the Rigsdagen, 11 seats in the Forsammling and 19 seats in the Folkshus. The party does not contest seats in Frelland, though in 2019 party leader Clara Brøndum did not rule out the possibility of running candidates there in future. 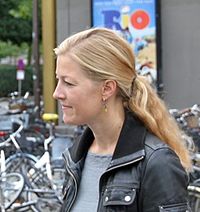 Retrieved from "https://iiwiki.us/mediawiki/index.php?title=The_Alternative–Greens_%2789&oldid=383561"
Categories:
Hidden category:
This page was last edited on 6 August 2021, at 23:36.
Privacy policy
About IIWiki
Disclaimers