Humans first migrated to Scovern from Werania in 7000 BC, with the Stoense and Warnitz cultures. Petty kingdoms did not emerge until around 200 BC, and had limited contact outside their local area. First major contact with mainland Euclea began during the Marauder Age, where Scovern became a notable centre of both marauder raids and their settler kingdoms. The largest of these kingdoms, Connland, encompassed much of modern-day Mesconia. In the 9th century, the Sixtenite Kingdom under Sixten Agnarssun came to dominate North Sea affairs, and was based in what is now Istebjerg. The fall of the Sixtenite Kingdom gave way to feudal and mercantile states, which firmly established Mescon as the dominant language of trade in Scovern. Some of these states eventually joined the Rudolphine Confederation for protection. The Frellish Crusade in the 13th century eliminated the last vestiges of paganism in Euclea.

Olav II, who had unified southern Scovern in 1570, led a bloody unification campaign that coincided with the Amendist Wars. The growth of absolutism and Taenarianism in Scovern led to it becoming one of few Catholic states to fight against the Confederation during the wars. It doing so, it eliminated the final Rudolphine states on the isle, and Scovern entered a period of isolationism that was not broken until the 19th century. This isolationism stifled the spread of the Industrial Revolution in the 19th century, but its proximity still saw it adopted relatively quickly. The Euclean Spring introduced parliamentarianism and representative democracy in 1840, eventually expanding to universal suffrage in 1911. Scovern participated in the Great War with the Grand Alliance, where many Scovernois soldiers died. The war prompted a national debate as to the future of the military, and eventually it was scaled down massively to just a small land force and navy. Federalisation of Scovern began in 1961 under the administration of Vestelian premier Frank Kristian Sandberg, and ended in 1980 with full federalisation.

Scovern is a highly developed state, with an advanced high-income economy, a large welfare state, high rates of unionisation and low income inequality. Scovern consistently ranks highly on measures including democracy, education, equality, healthcare, press freedom and political transparency. Scovern is a member of many international organisations, including the Association for Economic Development and Cooperation, the Community of Nations, the Euclean Community and Euclean Common Defense Treaty Organisation, the International Council for Democracy, the Global Institute for Fiscal Affairs and the Northern Forum.

Etymology, pronunciation and other names

In Estmerish, Scovern is usually pronounced either with an open back rounded vowel, /ɒ/, or the diphthong /oʊ/.

In most Annic languages, the name for Scovern is Vuonalån, roughly meaning "land of the fjords" or "land of the rivers". Vuona is a native Annic word meaning fjord or river, whereas lån is a Weranic loanword for land.

Archaeological records show that humans first settled in Scovern around 9000 BC, migrating from Werania. Early settlement was entirely limited to the south of Scovern, with ice caps making most of the island uninhabitable for a significant period. These humans later sailed and settled in Caldia after 8000 BC. Early humans in Scovern were fishermen, being subservient largely on a seafood-based diet. Gradually, fishing was supplanted by hunter-gatherers and later by farmers and agriculture.

The Bronze Age was slow to make its way to Scovern, with bronze tools being rare and only able to be bartered for by chiefs and other extremely wealthy people. Many rock carvings in Scovern date from the early Bronze Age, including the Tune carvings and Skrejup carvings. Contact was also limited between the people of Scovern and the Solarian Empire during the Iron Age. Many people in Scovern still resorted to stone tools during this period. Gold and iron became far more widespread in Scovern after the sacking of Solaria by Weranic tribes in 426 AD.

Scovern was a major centre of Ghaillish raids during the marauder age, and had by far the highest concentration of raids in the early Marauder Age. The first recorded Ghaillish raid was on the town of Orlafen in 792. Raids peaked in the 9th century.

Scovern's proximity to Caldia was the main reason for the high number of raids, though Scovern's politically fractured nature during this period made the various petty kingdoms across the isle susceptible to raids during this time. In 839, the first recorded marauder settlements emerged on the eastern coast of Scovern, including the founding of the city of Connheim which eventually became the capital of Connland, one of the most powerful marauder polities and a significant base for further marauder activity in Scovern and elsewhere in northern Euclea.

Scovern boasts a high amount of biodiversity, both in its flora and fauna, including species that are endemic to the country and have adapted to live in its avanaric climates. As a nation, Scovern also has a good record on animal welfare as well as natural biology and the faunal studies. From when Mikkel Lassen von Fittkau-Kresge established the Lassenite binomial system of taxonomic classification to modern day expeditions by Scovernois scientists to other countries, Scovern has regularly been a global leader in biological studies.

The country sports thousands of species, the vast majority of which are shared across mainland Euclea. Frequent glaciation as well as proximity to mainland Euclea allowed species once native to Scovern to migrate elsewhere in Euclea thousands of the years ago. Scovern also has a myriad of vagrant species. Much of Scovern's recognisable fauna are game animals and mammals with thick fur coats, which were hunted and sold as part of the Scovernois fur trade, including the Avanaric fox, brown bear, Euclean bison, grey wolf, lynx, muskox, red fox, reindeer and the wild boar.

Henrik
King of Scovern
since 1997

The politics of Scovern are laid out in the Constitution of the Kingdom of Scovern, first ratified in 1840 but has since gone under many significant amendments, including the introduction of universal suffrage in 1911 and federalisation in 1980. Scovern is a constitutional monarchy within the framework of a representative democracy, with a unicameral legislature.

The head of state of Scovern is the monarch, currently Henrik since 1997. Officially, the monarch retains executive powers, but since the 1940s the monarchy has taken a strictly ceremonial role in Scovernois politics, mainly conducting official state visits on behalf of the country. The premier (officially the Minister of State) serves as the head of government, and in practice possesses most of the executive power within the Scovernois government. The premier usually leads a majority of seats in the Rigsdagen either on behalf of their own party or a coalition government, but this is not always the case. The premier is always a member of the Rigsdagen, though not always the leader of their respective party. 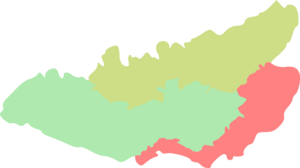 Energy in Scovern is produced through a multitude of methods. The most common of these are geothermal energy and hydropower energy, which account for 32% and 44% respectively of Scovern's total annual energy production. Biomass, offshore wind farms and petroleum make up the majority of the rest, though Scovern's government has steadily decreased the country's reliance on North Sea oil. The country's geography has allowed Scovern to produce an abundance of renewable energy. In 2017, a coalition agreement between the Liberal People's Party and the Radicals saw Scovern become one of the first countries to commit to carbon neutrality by law. Scovern's current target aims for full carbon neutrality by 2045.

Scovern's population is around 27.1 million people, making it the eighth-largest country in Euclea and the sixth-largest in the Euclean Community. Scovern's total fertiliary rate is 1.7, below the replacement rate of 2.1 but higher than the northern Euclean average, owing to its extensive welfare state that provides support for families having children. Scovern's three primary demographics are Mesconians, Vestelians and Frellanders, though the former two have had a long history on the unity of their respective identities and cultures which has lessened in recent years. Scovern's three constituent nations, Mesconia, Vestelia and Frelland contain 13.6 million, 10.9 million and 2.5 million people respectively. Scovern's population density is around 31 people per square kilometre (79 per square mile), second-lowest in the EC behind Caldia. Scovern's three largest cities are Rimso, Kalstad and Lagerup, the latter two forming the large urban areas of South Vestelia and Elgebugt.

Scovern maintains a jus sanguinis citizenship law, making birth-right citizenship eligible only to those born to one or more Scovernois parents. Around 7% of Scovern's population come from a foreign background, concentrated mainly in cities such as Rimso (22.6%) and Kalstad (17.8%). Immigration to Scovern has increased steadily in recent decades, with an increasing amount of asylum seekers and refugees entering the country. Immigration from elsewhere in Euclea is also common and Scovern has established itself as a popular destination for retirees to emigrate to.

Scovernois musician Elena Rohde wearing the swan dress during the 1994 Euclovision Song Contest, which she won with "Jóga".

Music has been present in Scovernois society for thousands of years. The Annic joik was one of the first styles of music played on the island. The Ghailles placed a large emphasis on musical tradition when they settled in Scovern in the 9th century, introducing the bagpipes and forming the basis of much of traditional Scovernois music in later years.

Due to its geographical and political isolation from mainland Euclea, classical music in Scovern took time to develop and popularise in Scovernois society. Famous classical-era composers from Scovern include Sven Aune, Paul Ekern, Guðni Hildingsson, Mathias Høgh and Arthur Sørensen. Most of these composers were active in the 19th and 20th centuries, and composed a great number of symphonies and operas.

Contemporary and popular music became common beginning in the 1960s. Scovern is particularly known for its downtempo scene, which emerged in conjunction with the development of electronic music in major cities in the 1990s. Groups such as Cosmogramma, Dødssynder and Flintinge were pioneering in the genre, attaining domestic success in the early 1990s, though it was ultimately Elena Rohde who brought international recognition and acclaim to the genre. Blending it mainly with art pop, she gained worldwide fame during the decade, and won the 1994 Euclovision Song Contest with "Jóga".

Other genres in which Scovern is a notable exporter include alternative rock, ambient, black metal and house and shoegaze. Notable acts from these genres include Bloody Mary, Dauðaleið til Borgarness, Double Hélice, Flotteurs, Moonrocks and Neðanjarðar.