The Despotate of Vekara or Vacara was a successor state of the Hyseran Empire. It broke away from imperial rule after the fall of Hyser, in 811, and refused to acknowledge Trellinese authority. It maintained an independent existence until 1348, when it was annexed by Nersika under the terms of the Treaty of Avar. Its capital was at Bara ti'Vacara (modern Bara Vekriz), a powerful citadel which resisted multiple sieges from its neighbours in Arimathea, Lekhmir and Nersika.

Bara ti'Vacara was established c. 410 AD as an outpost of the Hyseran Empire, during the reign of Acalaima the Wise, to check the growth of Arimathea to the northwest and restrict its trade across the Vekra Retiqa. Subordinate fortifications established throughout the empire's most remote province would ensure its survival as an Ahéri-speaking island as its neighbours encroached on its territory. The province was officially named Kibliqún Pefo ti'Vacara, the Eastern March of Vekara, and continued under this name until the ninth century. 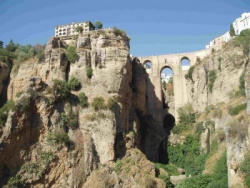 The Great Bridge of Bara Vekriz

In times of peace, the Vekaran governors would trade with their neighbours, even in Arimathea, and Bara ti'Vacara grew to become a wealthy city in its own right. Representatives of the emperor would visit the province only rarely, as Hysera's influence waned and it became more dangerous to send deputations. By the late sixth century the province was governed as an almost independent fiefdom and was known to declare and wage wars without imperial authority, though always paying lip service to its sovereign. By the time of the fall of the Hyseran Empire, in 811, the province minted its own coins featuring the now-hereditary governor's head and name, with only the letters vta, standing for ventlaan ti'altlaan ('emperor's servant'), as acknowledgement of his liege-lord. When word reached Bara ti'Vacara of the fall of Hyser, late in 811, the governor refused to be bound by the terms Trellin had imposed on the fallen empire and declared that the march would continue as an independent state.