Dulebian Airways (Dulebian: Дулебские Авиалинии) was Dulebia's government-owned flag carrier between 1991 and 1993. It was formed in 1991, after the bankruptcy of DAT, the state-owned carrier of People's Republic of Dulebia. Dulebian Airways received part of the old DAT fleet, while the rest was sold on auctions in 1991. The company encountered financial instability following the fall of communism. Despite managing to continue operations, it never managed to become profitable, instead soaking budget money, often on controversial activities and deals. At the same time, the airline was also notorious for numerous delays in salary payment and constant employee strikes. Following the air crash of Flight 3461, caused by the first officer, who suffered from mental illness yet was characterized as fit for flights, the airline faced numerous national and international restrictions on flight operations. Dulebian Airways was restructured in late 1993. Following an agreement between the Dulebian Government and a number of smaller airlines and private investors, a number of companies merged with Dulebian to form Skytrain, the current flag carrier of Dulebia.

As of 1992, Dulebian Airways offered flights to the following destinations: 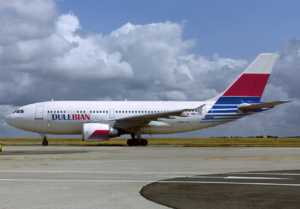 Just after its formation in 1991, the fleet of Dulebian Airways consisted of the following aircraft:

Retrieved from "https://iiwiki.us/mediawiki/index.php?title=Dulebian_Airways&oldid=230695"
Categories:
Hidden category:
This page was last edited on 26 July 2020, at 17:22.
Privacy policy
About IIWiki
Disclaimers