Federal elections were held in the United Etrurian Federation for both houses of the Senate of the Federation on the 10 August 2016. All 680 and 290 members of the Chamber of Representatives and State Council respectively, were elected under a single non-transferable vote system in multi-member electoral districts.

The election saw the established two parties of the incumbent Etrurian Federalist Party, under President Andrea Salvini and the Etrurian Socialist Party, under Matteo Fernandio Paruta suffer their worst defeats in history. The Tribune Movement under Francesco Carcaterra won a landslide victory, securing a majority in both houses of the Senate, while the Citizens' Alliance under Gianluca Tozzo made strong gains. The Workers and Farmers Union, under Milan Vučković and the Etrurian Greens under Fernando De Micheli making some gains.

Francesco Carcaterra became President of Etruria the next day with a sizeable contigent in both houses of the federal legislature, however, the Tribune Movement fell short of a majority and entered into a coalition government with the Farmers and Workers Union. The coalition agreement had been made a week prior to polling day due to shared analysis of polls. The result also marked the first time a far-right populist political party had been elected into government since the functionalist era.

At the last election, the Etrurian Federalist Party was returned to power with slight losses to the Citizens' Alliance and Tribune Movement in wake of President Emiliano Reali's declaration that Etruria would hold a referendum on membership of the Euclean Community back in 2012. The Etrurian Socialist Party also lost seats to the Tribune Movement, indicating a long-held belief of declining support for the established parties.

The failure of the Reali government to hold the referendum swiftly after the election further compounded the decline in support, with many noting the pacing had given extra oxygen and space to those opposing the referendum. Between 2013 and 2016, the Reali administration was hit by a series of minor corruption and personal scandals, which further damaged support.

When the EC membership referendum which took place between June and July 2016, the poor organisation and bitter infighting within the pro-EC camp (led jointly by the Federalist and Socialist parties) and major corruption scandals consuming the Reali government, ultimately played a key role in the No-campaign's (led by the Tribune Movement) dramatic victory on July 6, when 55.34% of voters rejected membership. President Reali resigned on July 7, being succeeded by Vice President Andrea Salvini.

The defeat of EC membership also caused resignations in the Socialist Party and the collapse in support for both parties, while the victorious Tribune Movement, absorbed numerous right-wing and far-right minor parties and demanded a general election. Under immense pressure and growing unpopularity, President Salvini announced a snap election would be held on August 10. Throughout the campaign, Salvini's government was rocked by sudden resignations and arrests over the sprawling Meraviglia Scandal, while support for the Tribune Movement and progressive Citizens' Alliance was growing. 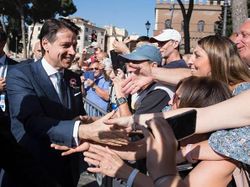 The Tribune Movement's campaign was fundamentally built upon the momentum it gained by leading the No-campaign to victory in the EC referendum. The party had produced a post-referendum electoral plan, both in defeat and victory. The “victory manifesto”, was championed as the “plan for rejuvenation” and sought to capitalise on the anti-EC and patriotic sentiment established during the campaign. The Tribunes also heightened their populist and anti-elite position by advocating vast reforms to the electoral system, judiciary, senate and powers of the executive. However, they would quickly focus on the corruption scandals engulfing both major parties and vowed to be the “party of justice and honesty.”

When the campaign began, the Tribunes were reportedly in the lead in all polls and saw gains with each drive on anti-corruption and anti-elitism. Throughout the campaign, senior Tribunes worked hard to establish a link between corruption and political centrism, attacking the Citizens’ Alliance as “equally centrist and equally criminal.”

The Tribunes presented a manifesto that promised to:

Many commentators at the time noted that the Tribune’s campaign was well-run and organised, relying mostly on a vibrant and active grassroots movement. Unlike the other parties that centred much of their media efforts on the party leader, the Tribunes presented senior figures to the campaign trail, such as Gianfranco Galizia, Vittoria Vasari, Ettore Mantovano, Vitkor Robar and Tullio Quagliariello as much as leader Francesco Carcaterra.

The Tribunes also made the most extensive use of social media and mass rallies, developing an app for smartphones that alerted supporters to spontaneous meetings or electoral rallies. The Tribunes held the largest rally of an estimated 50,000 people near Poveglia.

Since the 2004 general election, Etruria's federal elections have only permitted one exit poll to be broadcast to voters when polls officially close at 22.00pm. This exit poll is a calculated average of all exit polls produced by broadcasters, pollsters and newspapers and distributed to media outlets by the Federal Electoral Office.

The 2016 poll entered controversy after falling far-short of the actual Tribune victory, in that it predicted a hung-parliament.