Aborzhenia, officially the Federation of Aborzhenia, is a federal semi-presidential constitutional republic located in Southern Ventismar on the planet of Sunalaya. 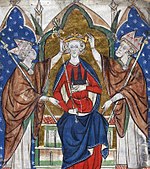 In the beginning of Ruzkov rule over Aborzhenia, religion was not much of a primary issue of conflict. While some skirmishes between followers of Aunhii and Catholics were recorded as occurring early as 840 in the Benstowe Chronicles, the early Ruzkov administration tended to allow the two main religions to interact and even create a syncretic belief later known as Kerlatism. However, after around the year 1200, Emperor Yonwjjn III of Gürhelsten was convinced by Ruzkov leaders of the Aunhii religion that the presence of outside religions in the realm was dangerous to their faith. As a result, Yonwjjn declared an Inquisition to combat this supposed aggression. Almost immediately after, Catholic and Kerlatist dukes and nobles were deposed from their seats of power, and in some cases even killed. Ruzkov armies rampaged through the country, destroying Catholic and Kerlatist churches and abbeys. Even the commonfolk were not immune from this violence, and the Catholic church town of Dunsbury-upon-Nemes was razed in 1203. Many Aborzhene nobles (who were mostly of the Aunhii religion themselves) were indignant at this new treatment by their overlords, but in order to avoid rocking the boat and losing their own titles, did not stick up for their Catholic countrymen.

Kilcochran Abbey, where the Magno Senatus was signed in 1204

The stance of these nobles changed dramatically in late November of 1204, when Yonwjjn issued a decree demanding that the Aunhii nobles must levy their peasant armies into battle against the Catholics and Kerlatists in order to maintain their titles and station under the Ruzkov crown. This decree is seen as the turning point that singlehandedly brought the Dukes of the Seven Provinces against Ruzkov rule together. Thus, in an ironic way, the decree is seen as a founding document contributing to a united Aborzhene identity. These indignant nobles, as a response to Yonwjjn's decree, convened in secret in the ruins of Kilcochran Abbey in Norrland in December to decide on a course of action. At the end of the week in December 1204, the Abbey Conference ended with the election of Duke Æthelwin of Bensmeathe as the de facto leader of a rebellion against Ruzkov rule. To solidify their intent, the Dukes signed the Magno Senatus (Great Document) that dissolved all ruling bonds the Ruzkov empire had over Aborzhenia.

Of course, dissolving these bonds by declaration and actually achieving political independence are two very different things. As soon as the declaration reached Yonwjjn III, he made this fact clear by instigating a new campaign across Dunston against the armies of Æthelwin. Initially Æthelwin saw some success, and after the Battle of the River Nemes his armies took part in the highly symbolic recapture of the ruins of Dunsbury. Within the ruins of Dunsbury Minster on March 21st, 1205, Æthelwin crowned himself as the first High King of Aborzhenia, a gesture that symbolized the finalization of the unification process begun by the Abbey Conference. Soon after this coronation, however, new reinforcements from the Ruzkov heartland arrived to quell the rebellion and drove the rebel princes into the Highlands for the next few years. There, a proto-state was formed around the former Romalaen citadel of Wickham-upon-Meathe to nurse the rebels' wounds and build up strength.

Aborzhenia is divided into eight Provinces. With the exception of South Rukonia, each of these Provinces roughly represents the original seven kingdoms of the mediæval Heptarchy. These Provinces function somewhat autonomously from the National government, controlling their own tax bases, parliaments, justice systems, legislatures, governors, and police systems separate from the federal systems.

In addition to the eight Provinces, the upscale neighborhood of Edælia also lies partially within the Aborzhene Capital District (ACD), which is legislated directly from the national government. Services like fire and medical care that cannot be effectively governed by the national government are provided by the Metropolitan Government of Port Saint Edwards, the city that surrounds the ACD and that the remainder of Edælia lies within.

Composition of the National Assembly

Composition of the National Senate

Retrieved from "https://iiwiki.us/mediawiki/index.php?title=Aborzhenia&oldid=88666"
Categories:
Hidden category:
This page was last edited on 14 July 2019, at 17:41.
Privacy policy
About IIWiki
Disclaimers