The Centre Party (Ghaillish: Páirtí an Lár) is a liberal and agrarian political party in Caldia. Historically a centrist party, the party has shifted its focus towards social liberalism, environmental protection, small businesses, young voters, and the decentralisation of governmental authority.

The party was first founded in 1916 as the Farmer's Party (Feirmeoirí Páirtí) and changed its name to the Centre Party in 1941. Originally founded as an agrarian interest party, it also included the interests of those employed in the logging and fishing industries in addition to rural interests. It has formed coalition governments with both the Liberty Party and the Social Democrats. It participated in Liberty-led governments from 2007 to 2019.

It has 12 TCs in the Comhthionól Náisiúnta and four representatives in the Seanad Glítteann. It is a member of the Euclean Liberal Party and sends one MEP to the Euclean Parliament.

The party was founded in 1916 as the Farmer's Party. Its purpose was to meet the demand for a new political party to represent the interests and needs of the rural working class, notably those employed in agriculture. Its founders hoped to mirror the growing success of the Social Democratic Party, which appealed to the urban working class. Soon after its founding the party worked to bring those employed in the forestry and fishing industries into its electoral base, adopting policies that represented their interests. These three industries were central to the Highland economy and much of the population was employed with them. In 1922 the Highlanders' Union merged into the party, solidifying the role of rural and Highland interests in its platform. After the merger the party was known as the Farmers' and Highlanders' Party (Páirtí feirmeoirí agus tailtardanach). The party saw strong support from farmers in particular. Many of its early TCs were farmers that played an active role in their local communities.

It was among the smaller members of the Comhthionól for decades and competed primarily with the National Conservative Party. However, the NCP's collapse created an opportunity for the party to expand its electoral base. The Highlands and rural counties in Sudreadharr, Central Caldia, and the Lowlands became the party's center of power. Its changing role in Caldish politics saw the party renamed as the Centre Party in 1941. It entered a coalition with the Social Democrats from 1952 to 1957. The party abandoned its long-time leader, Eilís Ní Raghallaigh, a prominent farmer and agricultural labor activist, for Cian Mag Uidhir. Mag Uidhir brought the party farther away from its origins in organized rural labor and introduced more economically liberal positions. He also embraced the party's traditional socially conservative platform. Economic crisis resulted in the 1975 snap election, which the Social Democrats lost. After the snap election, the Centre Party entered a short-lived coalition with Liberty from 1975 until 1977. It remained in opposition until 2007 when leader Malcolm Fitzpatrick secured a coalition agreement with Liberty's Alexis Walker.

Walker announcing her coalition with Malcolm Fitzpatrick in 2007

In Walker's coalition, Fitzpatrick secured policy concessions in line with his party's platform. The coalition lost its majority following the 2012 general election. It continued as a minority government with support from the Caldish Democrats. While in government, the Centre Party secured new regulations protecting the environment, increased funding for rural municipalities, and an increase in the number of shares in RPG held by the government's pension fund.

Walker stood down prior to the 2017 general election and was replaced by Jimmy O'Reilly. The party promised to eliminate university tuition fees, winning it notable support among young voters. It was 34 seats, the party's best performance in its history. The Liberty-Centre coalition continued to govern after the 2017 election, with the Caldish Democrats joining the coalition. Fitzpatrick died of a heart attack on 22 March 2018. He was succeeded by Cúan Ó Domhnaill, the Minister of Education, as party leader. Centre remained in the coalition after O'Reilly resigned over a diplomatic scandal. The party had hinted it would exit the coalition if the taoiseach did not resign. Frank Casarnach led the coalition until its collapse in January 2019. A bid-rigging scandal saw Centre and the Caldish Democrats withdraw their support for Casarnach's government. They called for a new election. Centre lost most of its seats in the February snap election, winning just 12 seats. It was the party's worst performance since 1977. Since 2019, the party has returned to its rural roots and has primarily focused on environmental and local issues. 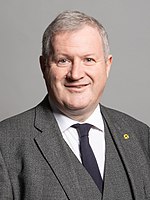