The Tionól of Caldia, often simply the Tionól, is the supreme legislative body in Caldia. It alone possesses legislative supremacy and thereby ultimate power over all other political bodies in Caldia. Its head is the Monarch of Caldia (currently King Kenneth IV) and its seat is Carrowdun Palace in Spálgleann.

In 1814, the Seanad was established by the Constitution of Caldia and the first democratic national elections were held in the country that same year. The Comhthionól was created following the Silent Revolution through the Instrument for Governance Act of 1857.

The name Tionól literally means meeting in Ghaillish. It can also be translated as assembly. Tionól was derived from the name of the bodies that advised the High Chiefs of the petty kingdoms that existed before the unification of Caldia

The Tionól has its earliest origins in the now defunct Chamber of Lairds. The Chamber of Lairds was established in 1632 following the close of the second Dejarlist War. Rory I created the body as a parliament by royal decree in exchange for the nobility's armed support to repel the invading Gaullican armies. Previously, the Privy Council was the sole decision making and advisory body in the country. The creation of the Chamber of Lairds saw an era of coexistence which lasted until the eventual abolition of the legislature. The privy council, headed by the Laird Chancellor, would draft resolutions that would be voted on by the Chamber of Lairds in order to become law. The monarch had the authority to veto legislation by either refusing to sign it or by issuing a decree of their own to rescind it. The Chamber first convened on 15 January 1633 and served as Glytter's legislative body until 25 May 1814 when it was formally dissolved. 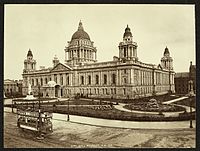 Carrowdun Palace has served as the seat of the Tionól since 1906.

The Constitution of Glytter mandated the creation of the Seanad Glítteann to serve as the country's new legislature. Unlike the Chamber of Lairds, the Seanad was partially democratic. A representative for each of Glytter's 25 counties was elected every four year. Originally, the Seanad was composed of the 25 elected senators, 20 hereditary peers, 9 Lairds Spiritual, 6 Lairds Academia, and 4 senators appointed directly by the monarch. There was also the Laird Chancellor, the head of the privy council, who was appointed by the monarch as his or her pleasure. The Laird Chancellor was responsible for leading the government, and by extension drafting and proposing legislation as well as implementing and enforcing it. The first Seanad election was held on 26 May 1814, the date constitutionally mandated for Seanad elections to be held. The hereditary peers were abolished in 1857 and replaced by elected senators, while five new seats were added. This meant that each county was now represented by two senators.

During the Silent Revolution, which occurred at the end of the Age of Revolution, the demand for reform became apparent. Leading politicians, as well as King Elton I, determined there was a need for an elected lower-house that would serve as the principal chamber of the legislature. Dónall Ó Conaill, the Laird Chancellor from 1855 to 1857, oversaw the creation and implementation of the Instrument for Governance Act of 1857. The Instrument for Governance was passed by the Seanad in February of 1857 and made significant changes to constitution. The Comhthionól Náisiúnta was created in order to serve as the lower house of the now bicameral legislature, which was to be known as the Tionól. The Instrument for Governance mandated that the Comhthionól be composed of 400 elected representatives, to be known as Teachti Comhthionól (TCs). TCs were to be elected from constituencies across the nation. The position of Laird Chancellor was also abolished and replaced by the newly created office of the Taoiseach, who had to chosen from among the Comhthionól. The privy council was also abolished and replaced by the Crown Council, which was composed of representatives of the monarch, TCs, and the Great Offices of State. Government ministries to implement and oversee government initiatives were also created independently of the council and made up the Cabinet.

The Tionól was later reformed by the Instrument for Governance Act of 1965 followinf Government Crisis of 1965. The majority of elected Seanad seats were held by the Liberty Party. As a result the Cathaoirleach, Dónal Ó Loingsigh, was a member of the Liberty Party. He used his seat to delay major reforms pursued by Taoiseach Mary O'Neill by refusing to put them up for a vote. Instead of calling for a snap election or waiting for the 1966 Seanad election, O'Neill instead pushed to strip the upper house of the bulk of its powers. The Instrument for Governance Act of 1965 was passed with a two-thirds super majority after negotiations between the parties sitting in the Comhthionól. After her reforms were implemented, the Taoiseach was granted the power to appoint eleven senators, an increase from the four previously permitted. This is done in order to ensure the government has a majority in the Seanad, which now only has the powers to review and delay legislation. The total number of senators went down from 70 down to 60. Counties were once again only represented by one senator as opposed to two. It also saw the creation of new separately appointed posts, the Lairds Commercial and the Lairds Agricultural. This was done in order to emphasis the Seanad's role as an advisory body. The Instrument also changed the number of seats from 400 to 399 in the Comhthionól in order to prevent political gridlock.

The Tionól is bicameral and has two chambers: the Seanad Glítteann and the Comhthionól Náisiúnta.

The Seanad Glítteann (Senate of Caldia) is the upper house. Its members senators (seanadóirí in Ghaillish, singular: seanadóir), of which only 25 are elected. Elected senators represent Caldia's 26 counties and are elected using first past the post every five years. More than half of its members are chosen through various methods, typically rooted in appointment. 15 are appointed by the Taoiseach in order to help ensure the government maintains a majority. The Leader of the Opposition appoints three senators. The remaining senators are known as the Lairds Spiritual and the Lairds Academia. Its powers are considerably more limited than those of the Comhthionól and it can only delay laws with which it disagrees, rather than veto them outright.

The Comhthionól Náisiúnta is the lower house. It is directly elected at least once every five years under a mixed-member proportional representation. Its 399 seats are divided into 200 multi-member constituencies and 199 seats that are selected based on a party's vote share. TCs elected to multi-member constituencies seats are chosen using single transferable vote (STV). The remaining seats awarded based on vote share are allocated to parties who rank their candidates on an open list in which voters can rank candidates on their own. The Comhthionól's powers are similar to those of lower houses under many other bicameral parliamentary systems and it is by far the dominant branch of the Tionól. Subject to the limits imposed by the Constitution of Caldia, it has power to pass any law it wishes, and to nominate and remove the Taoiseach. The Comhthionól confirms members of the Cabinet and appointments to the High Court.

In a normal legislative year, there are two legislative sessions. The first session marks the return of the legislature from the Nativity and Winter Recesses. The monarch presides over the official State Opening of the Tionól on the he first Monday following the Epiphany holiday. The State Opening starts with a procession down the Royal Mile starting from Clochnoc Fortress and terminates at Carrowdun Palace. It also sees a speech from the throne made by the monarch, which outlines the government's agenda for the first session. Both chambers are present for the official opening of the first legislative session. The first session ends in July with the Summer Recess. The Tionól reconvenes on the third Sunday of August for the start of the second session, which ends with the close of the legislature for that legislative year on the third Sunday of December. The close is presided over by the monarch. 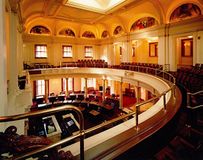 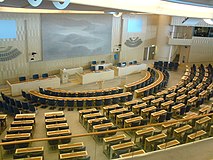 In a legislative year with a general election, there are three legislative sessions. Instead of ending in July, the first session ends when the Comhthionól is dissolved by the monarch on 12 May, a month before the election is set to take place, following the issuing of the writ of elections. A care-taker government led by the current government is then in place until the Comhthionól reconvenes on the first Monday following the election. However, it cannot reconvene unless a government can be formed, meaning the recess may last longer than the first Monday. The second session then lasts from June to July and the third from August to December. The Seanad always goes into recess at the same time as the Comhthionól

The Tionól is generally in session Monday to Thursday. However, it will meet on Friday's when there is legislation the Government or the Ceann Comhairle designates as urgent. Many TCs take advantage of the lack of regular Friday sessions and opt to return to their constituencies for the weekend to handle local matters. Recesses, however, officially declare the Tionól closed on designated Fridays. This means that the presiding officer in either chamber cannot call the chamber back for an emergency session. However, the monarch is able to issue a writ of return. Cabinet meetings take place on Monday mornings, meaning Cabinet ministers are absent from the Comhthionól. This time is traditionally reserved by the introduction of private member's bills. On Wednesday's at noon, the Taoiseach holds a session of Taoiseach's Questions. Party leaders and backbenchers are invited to ask him or her questions about the government's agenda for the legislative session. Four cabinet member's also usually make themselves available for questioning after the Taoiseach is finished.

Unlike the Comhthionól, the Seanad only sits on Fridays. However, the Cathaoirleach can summon senators for a special session on any day of the week the Tionól is not in recess. A weeks notice must be given before the Seanad can convene for a special session. During a Seanad election year, the chamber is dissolved on the second Monday of May by the monarch and reconvenes on the first Monday after the election.

During the the 2020 calendar year, the Tionól is scheduled to be in recess a total of nine times.

In an election year, the legislature enters a General Election Recess from 12 May to the first Monday after the 12 June election. It goes into recces following the following the dissolution of the Comhthionól Náisiúnta on 12 May.

Retrieved from "https://iiwiki.us/mediawiki/index.php?title=Tionól&oldid=166144"
Categories:
Hidden category:
This page was last edited on 12 February 2020, at 13:27.
Privacy policy
About IIWiki
Disclaimers