Gylias is famous for its liberal approach to drugs. Its drug policy is based on harm reduction and extensive regulation. Possession and recreational use of drugs is legal; production and distribution is officially licensed.

Gylias employs a regulated market model for drug distribution. The Controlled Substances Administration (CSA) regulates drugs and acts as a bridge between manufacturers and retailers. It has complete control over the products, packaging, and all marketing activity. Drug policy is based on the Law on Substance Controls of 1961, which distinguishes between soft and hard drugs and implements different mechanisms accordingly. The Public Health Agency oversees substance abuse prevention and treatment programs.

Gylias' drug policy is famous within Tyran as a model of drug liberalisation. It is a significant centre of research into psychedelic drugs and their effects. Psychedelia has had a significant impact on Gylian culture and society during the Golden Revolution.

None of the major Gylian predecessor polities had a tradition of drug prohibition. The province of Alscia carried out the first research into the effects of drugs in the 20th century, benefiting from the lack of prohibition in the Cacertian Empire.

Drug use was hardly controlled in the Free Territories. Alcohol and tobacco were sold through markets, while other drugs were distributed through medical prescriptions.

Drug use among the broader public began to emerge in the 1950s, particularly through stimulants spreading from People's Army units to the civilian population. 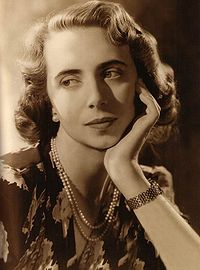 Chloë Eleutheriou, the first director of the CSA, had a significant influence on Gylian drug policy.

Gylian drug policy was initially influenced by economistic considerations. The reorganisation of the economy into market socialism included the implementation of price controls by the National Prices Board and the manifestation of a strong consumer movement, which emphasised drug safety.

Policy initiatives began at the local level, where several communal assemblies and municipal governments created local monopolies on manufacturing and retailing of alcohol and tobacco.

In 1960, a Popular Assembly green paper proposed the federation of these local monopolies, which voters approved in a referendum. As a result, the Law on Substance Controls of 1961 was passed, establishing the Controlled Substances Administration.

The first CSA director, Chloë Eleutheriou, was a professor of chemistry as the University of Etra, and exercised a leading role in shaping Gylian drug policy. She opted for a model of the CSA as a pharmaceutical regulator, believing that direct control of manufacturing and distribution would interfere with its mission of drug safety.

She emphasised the rooting of drug policy in scientific fact, and conducted extensive research on psychedelic drugs. Her attitude came to favour psychedelics as less harmful than other drugs.

Chloë initiated Project Nous (Hellene for "mind") in 1961. The project paid volunteers to take drugs and report on their experiences as they happened. Many famous Gylians volunteered — including members of the Darnan Cyras government — and the experiments were filmed and used in public information films, increasing awareness of drugs.

The comprehensive research of the project produced the Chloë Eleutheriou Report of 1963, which became the basis of CSA classifications of controlled substances.

The Golden Revolution encouraged interest in the possibilities of psychotropics for emancipation and social transformation. Diverse groups, including revolutionary activists and scientists, encouraged psychedelic experiences as beneficial for humanity.

A "psychedelic revolution" took place in the mid-to-late 1960s: pop culture received a massive infusion of psychedelia, research into shamanism and entheogens influenced modern religious practices, and drugs as a tool of progress were promoted in politics by acid communism and the satirical LSD Party.

During the "psychedelic revolution", promotion of oral ingestion over intravenous ingestion aided public health, by limiting the spread of blood-borne diseases.

The rapid popularisation of drugs allowed organised crime groups such as the Mava Organisation and Kaþi Mofat to gain a foothold in drug smuggling and unlicensed distribution, although they still followed CSA regulations to avoid detection. A significant black market was using fake prescriptions to obtain drugs for free as medicine, rather than paying for them as a product, and then selling them for profit.

The "psychedelic revolution" abated after the 1960s, as its effects became the norm. Notable developments since have included the popularisation of MDMA through the growth of raves and dance culture, the introduction of legal guidelines for club drugs and party pills in the 1990s, and greater understanding and awareness of chemsex.

The Law on Substance Controls makes a legal distinction between drugs based on risk of harm and/or addiction. There are three legal categories:

The categorisation is largely based on the results of extensive research into the substances' effects, but also reflects an attitude that favours hallucinogens.

The supply of drugs is controlled by an integrated licensing scheme based on the Law on Substance Controls. The CSA has complete control over all drug products, managing product type, production, packaging, and marketing. In practice, drug distribution in Gylias uses two main models: the pharmacy model and the regulated market model.

Drugs as medicine are distributed through pharmacies, together with other medications. Customers bring prescriptions and the attending pharmacists fulfil them by dispensing the respective drugs. Pharmacies also have drug counseling specialists in attendance, who offer advice about harm reduction, safer use, and referrals and treatment services to help users quit, where appropriate.

Drugs as consumer products are distributed through licensed outlets and premises. Production and distribution itself is carried out independently, by licensed manufacturers, importers, and retailers, the majority of which are cooperatives. The CSA serves as the link between the two: producers compete to supply the CSA with raw materials, while retailers sell drug products to appropriate customers.

The CSA determines packaging, controls promotion, sets conditions for sale, controls the price (in collaboration with the NPB), and incentivises production and use of harm-reduced products.

Besides licensed premises, there are also supervised drug consumption facilities, which function with legal sanction and medical supervision in order to provide a hygienic and stress-free environment for individuals to consume recreational drugs. The drugs themselves are administered by trained medical personnel, mostly orally, although provisions are made for those who opt for drug injection. Staff are additionally trained to administer oxygen or medication in case of an overdose.

These are all free of charge and accessible to all users who seek treatment, as with other health services. Drug treatment and rehabilitation programs focus on after-care and social re-integration.

Extensive research into psychopharmacology has allowed the NHS to use certain drugs for medicinal purposes. Psychedelic therapy is a common treatment for mental disorders, along with psychiatric medication. Cannabinoids are commonly used to treat chronic pain. Psychedelics are used in end-of-life care, while barbiturates are the main method of voluntary euthanasia.

Outside of official medicine, psychedelic microdosing has grown in popularity as a means to improve creativity, performance, and emotional balance. 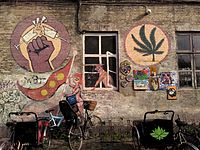 A mural on a squat in Ðajyr expressing a widespread public attitude in favour of soft drugs and against hard drugs.

Widespread acceptance of responsible drug use and awareness of the numinous possibilities of drugs have had a significant impact on Gylian society. Public opinion, revealed through surveys and polls, is among the most liberal in Tyran on the matter, and a majority of Gylians have had at least one psychedelic experience.

While recreational and medicinal use of drugs is accepted, the Law on Substance Controls has influenced views on specific drugs. Psychedelic drugs — particularly cannabis, LSD, and ecstasy — enjoy a broadly positive reputation among the public. By contrast, more harmful drugs such as cocaine and heroin are shunned.

The Gylian drug culture promotes the ideal of "social consumption" — casual consumption of drugs in a social setting as conducive to atmosphere. As such, harder drugs are seen as "asshole drugs" — geared to individual consumption and making the user unpleasant towards others — and are unpopular.

Promotion of drugs by several researchers and activists during the "psychedelic revolution" reinforced the utopian sentiments of the Golden Revolution. Psychedelic influences have become an established presence in Gylian pop culture since the 1960s, seen in music, cinema, art, and other fields. High Times is a leading monthly magazine covering Gylias' psychedelic culture, latest developments in drug research, and advocating responsible drug use.

Commentators from various fields, both in Gylias and abroad, have drawn a connection between the popular acceptance of drugs and the success of the Golden Revolution. Klara Lennartsson, professor of medicine at the University of Erikshamn, argues that Gylias' example shows that use of psychedelics as an effective treatment for mental disorders is correlated with "greater concern for the environment, tolerance for diversity, and a higher sense of creativity and peacefulness in the population as a whole".

Similarly, Janet Chapman wrote in a 2014 Radix article that openness towards experimentation with psychedelics was a factor in consolidating the Gylian consensus and limiting the appeal of political extremism.

Recreational drug use is a notable element of Gylian tourism.

Retrieved from "https://iiwiki.us/mediawiki/index.php?title=Drugs_in_Gylias&oldid=338030"
Category:
This page was last edited on 19 April 2021, at 16:56.
Privacy policy
About IIWiki
Disclaimers