The Dulebian Federative Socialist Republic (Dulebian Дулебская Федеративная Социалистическая Республика, tr. Dulebskaya Federativnaya Sotsialisticheskaya Respublika) was a short-lived state proclaimed in 1914 following the January Revolution in the Dulebian Empire and the dethronement of emperor Alexander III. It de jure controlled the territory of the former Dulebian Empire during its participation in the Great War. Its borders were set in May 1914 following the Treaty of Ulich with Lavaria and the formal defeat in the Great War.

The federation was a result of the personal project of Viktor Schyukin, leader of the communist movement before and during the revolution. In his beliefes, giving autonomy to the numerous peoples under the rule of the Dulebian Empire and inspiring them to revolt against the empire itself was the only way to preserve the country in its pre-war borders. The state originally claimed the whole territory of the former Dulebian Empire, however, with the rapid defeat of the Dulebian forces on the Eastern and, most notably, Western fronts of the Great War, Dulebia began to lose its former possessions. Paired with unrest and unwill to support the communist revolution among various peoples of the former frontiers of the empire, and facing the unstoppable advance of Lavarian troops threatening to capture the Karsk Sea coast and its important ports, the young state was forced to sign a peace treaty separately with Lavaria, losing half of the land previously owned by the Dulebian Empire. With Schyukin rapidly losing his influence over the revolutionary elite of the newly-formed Communist Party of Dulebia, it soon became obvious that the state could not exist in its current form. Viktor Schyukin left his post in November 1918, and died mysteriosly in 1919, most probably killed by the opposition within the communist party. The state itself was reformed to a republic the same year, and its status of an unitary state was further ratified in the Constitution of 1928.

The Dulebian Federative Socialist Republic was the first and only attempt to form a federation on the territory of present-day Dulebia that saw any execution, even if brief. Another attempt to reform the country and turn it into a federation was undertaken only after the collapse of the communist regime, but saw little success.

The DFSR during the civil war 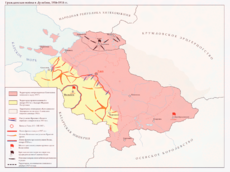 Konev and the reformation

According to the beliefs of Viktor Shchyukin, the new proletarian state was constructed as a federation. The territory of the country was separated into 6 states, known as autonomous socialist republics: the Dulebian ASSR, Volyna ASSR, Karsk ASSR, Northern ASSR, Rilivo-Verkhoyansk ASSR and Balkarian ASSR. Each republic was ruled by a soviet of workers and peasants, while the legislative body of the country as a whole was situated in the old imperial capital of Ulich, and received the name Supreme Soviet of the Workers and Peasants. While all parties were not officially banned on the territory of the state under Shchyukin, the ones which opposed the soviets during the civil war could not get any representation in the republican soviets and, subsequently, in the supreme soviet.

Retrieved from "https://iiwiki.us/mediawiki/index.php?title=Dulebian_Federative_Socialist_Republic&oldid=278461"
Categories:
Hidden category:
This page was last edited on 22 November 2020, at 12:46.
Privacy policy
About IIWiki
Disclaimers