The People's Republic of Dulebia (PRD; Dulebian: Народная Республика Дулебия (НРД) Narodnaya Respublika Dulebiya (NRD)) was the official name of Dulebia from the death of Viktor Shchyukin and the beginning of the rule of Lavrenty Konev in 1919 and the disestablishment of the socialist rule in the country in 1990, when the country was ruled by the All-Dulebian Party of Workers and Peasants (ADPWP, Вседулебская Рабоче-Крестьянская Партия (ВРКП), Vsedulebskaya Raboche-Krestyanskaya Partiya (VRKP)). The country was the successor of the Dulebian Federative Socialist Republic, the first soviet state in the history of the world, that was established during the Dulebian Civil War. The country became the first proletarian dictatorship as a result of the Dulebian Civil War. The state claimed all territories of the former Dulebian Empire until 1928, when its borders were internationally recognised, and its claims were suspended. While having two times less territory than its imperial predecessor, the People's Republic of Dulebia still remained one of the most ethnically-diverse Berean countries, a fact that led to the process of forced Dulebification and repression of minorities within the state, the main result of which was the formation of the Dulebian national identity. The state followed the international policy of the Dulebian Empire, targeted at the dominance of the state in the Karsk Sea. The Dulebian People's Republic initiated a number of international agreements between newly-born socialist states, funded socialist movements and revolutions across the world after the Great War and openly intervened in numerous conflicts, like the Mascyllary Revolution, Lavarian Civil War and the Rovinian War of Independence.

The People's Republic of Dulebia had its roots in the Dulebian Civil War and the state established by the soviet revolutionaries in the first years of the war, known as the Dulebian Federative Socialist Republic. This state was established as a federation of six states with different ethnic composition. The state was a project of Viktor Shcyukin, often called Father of the Dulebian Socialist Revolution. This structure was targeted at giving all peoples in the ethnically-diverse Dulebian Empire equal representation in an attempt to save what was left from the abovementined empire from further partitioning and collapse. With the progression of the Dulebian Civil War many revolutionaries and politicians of the new state began to see these peoples as unreliable and as threats to the Dulebian integrity.

With the death of Viktor Shchyukin in 1919, the power in the state was taken by Lavrenty Konev. Under his rule, the country isolated itself from the international community for almost a decade, performed a number of economic and agrarian reforms resulting in the establishment of a centrally planned economy and the collapse of the agricultural sector following a collectivisation reform, and its heartland was rapidly industrialized. Konev initiated massive repressions within the ruling party, abolished the worker and peasant soviets and disestablished the federative structure in favour of an unitary state. This period of early soviet history, known as Konev's Reformation, lasted from 1919 until 1924, when the first constitution of the People's Republic of Dulebia was officially signed. Dulebia began establishing diplomatic relations with other states only in the early 1930s and established itself as the leader of the communist world in the 1930s. The politics of Konev were continued by his successor Stanislav Yegorov, and the country participated in the Melasian Crisis.

Following the Melasian Crisis, Dulebia saw a shift in its international politics, and in 1958 under its new General Secretary Alexander Leonov it experienced a period of de-Konevification and a warming in the relations between the country and former members of the Armala Coalition. In the 1960s, Dulebia opened its borders for western tourists, initiated a number of economic programs with western countries, like the Joint Space Program, and even allowed western media and literature to be published in the country. The country experienced a partial liberalization of its markets and entered a period of slow economic growth in the late 1960s and 1970s.

After the financial crisis of 1985, the fossil fuel export-based Dulebian economy experienced a rapid collapse, a process that forced its leadership to initiate a number of liberal reforms like the Otkrytost. The Council of People's Representatives became the new main legislative body in the country following a reform in 1986-88, successing the previous Supreme Soviet, and the first free elections were held in 1988. However, these reforms proved insufficient against the economic crisis in the country, and after massive protests in the country in the last months of 1989 its General Secretary Nikita Kamenev left his post and initiated a national referendum. As a result of the referendum, the People's Republic was dissolved in 1990 and transformed into a parliamentary republic. The Republic of Dulebia assumed the former state's obligations and rights, and became the legal successor and personality of the former socialist state on the international arena.

Lavrenty Konev, leader of the Dulebian People's Republic between 1919 and 1935.

Viktor Schyukin died under mysterious circumstances in December 1919, falling victim to the struggle for power within the young Dulebian communist party. While his death left the country in a state of power vacuum, the leading post was quickly taken by Lavrenty Konev. Konev was one of the best-known revolutionaries within the party, a renowned field general who actively participated in the civil war, often fighting on the frontlines, and a politician who managed to rapidly climb the career ladder within the party. Between 1916 and 1919 he managed to acquire the post of narkom of the internal affairs, which was one of the most important positions within the state. His anti-Shchyukin stance was brilliantly concealed during the civil war, but became apparent soon after the end of the active part of the conflict. Konev, on par with several other high-ranked soviet officials, forced Shchyukin to leave his post and retire from active political career in March 1919. His life was spared as he was still considered the father of the communist movement and an important propaganda symbol, however, after almost a year of internal conflicts within the party and the establishment of Konev as the new leader of communist Dulebia, he was no longer needed.

The early rule of Konev saw the complete reformation of the political structure of the state. One of his first actions on his post was to abolish the federative structure of Dulebia in favour of a centralized, unitary republic. The role of the worker soviets in the executive branch of power in Dulebia was significantly reduced, up to a point when these soviets only acted as local trade unions and did not take any part in the political life of the country. Konev initiated an agrarian reform in order to gain maximum profit from the export of Dulebian grain abroad: a process of forced collectivisation and a forced prodrazvyorstka (policy of grain confiscation from the peasantry) led to the collapse of the Dulebian agricultural sector and to famine in some parts of the republic. The reform, lasting from 1919 until 1921, ultimately was deemed successful as it gave the so-needed financing to the process of industrialization, but at the price of thousands of victims of the famines and the forced confiscation, as well as of the peasant riots. The prodrazvyorstka politics were cancelled in 1921 and substituted with prodnalog. On the international arena, Konev attempted to establish diplomatic relations with some of the victors in the Great War, however, with the cancellation of the prodrazvyorstka and the rapid grain export as well as with the Dulebian support of communist movements in Mascylla Dulebia became effectively isolated from the international community for several years. Within the state, Konev initiated repressions in the communist party and later among the population of the country: supporters of Shchyukin, ethnic minorities, monks and kulaks among others, with those lasting from 1922 up until 1930, becoming known as Konev's Purge, and leading to the death or imprisonment of nearly 1 million Dulebians. This brief period of early communist history between 1919 and 1924 became known as Konev's Reformation, and ended with the approval of the first soviet Constitution of Dulebia which solidified the new order. Dulebia opened itself to the international community again only in 1928, when it signed a number of economic and military treaties with Mascylla and Lavaria. This led to the flow of foreign capital to the country, a process that was encouraged by its leadership and led to the start of the rapid Dulebian industrialization. Lavrenty Konev died in 1935, and power was taken by the narkom of internal affairs, Stanislav Yegorov, who preserved the cult of personality of the former leader of the country while also establishing his own. 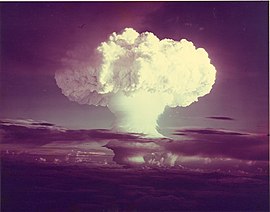 The first successful nuclear bomb test in Dulebia, conducted in 1953.

Yegorov ruled the country between 1935 and 1958. His rule became milder than the regime of his predecessor, however, political repressions still took place within the communist party. Yegorov focused heavily on the international policy of the Dulebian Republic: he intervened in the Lavarian Civil War in 1936 and supported the communist movement in the northern part of the country.Later, Yegorov also led Dulebia to almost direct involvement in the Melasian Crisis, as the country supplied arms and even specialists to several radical communist movements and guerrillas in Melasia. Ultimately Dulebia failed to establish a centralized communist movement in Melasia which resulted in the quick collapse of the far-left movements in the region. Dulebian intervention, however, led to the split of relations between the country and Cuthland-Waldrich, its traditional ally. This split led to the warming of the relations with the previously isolated state of Kodesh and an early thaw of relations between Dulebia and western powers, a process that became apparent only after the death of Yegorov. Dulebia tested its nuclear bomb in 1953, becoming the third nuclear power in the world.

Retrieved from "https://iiwiki.us/mediawiki/index.php?title=People%27s_Republic_of_Dulebia&oldid=279815"
Categories:
Hidden categories:
This page was last edited on 26 November 2020, at 14:24.
Privacy policy
About IIWiki
Disclaimers