George Ruset Land (Soravian: Джордж Рушет Земля; Dzhordzh Rušet Zemlja, Titiqituq: ᐊᖏᔅᖅᓄᓇ; Angisooqnuna), also historically rendered as Gheorghe Ruset Land is a large overseas dependency of Soravia. It is one of the least densely populated places in the world, with just under 800,000 inhabitants over an area of over 125,000km2. Over 90% of the island's population live in the capital city of Rakovnica, with the remaining 10% consisting mostly of the indigenous Titiqituq people who also inhabit the island. The island is also popular with tourists, with tourism making up a significant part of the regional economy, both for its unique landscape, Rakovnica scenery and for Arnaqa Point, the northernmost point in the world. The highest point on the island is Mt. Martinescu at 1,178m.

The island was discovered and settled by Amathian explorer Cosmin Martinescu, who named it after George Ruset, one of the kings of the Unio Trium Nationum. It was officially designated as a dependency of Soravia instead of a colony in the 1861 constitution, following the First Soravian Civil War. It served as a minor naval base and port for Soravian vessels travelling across the Lumine to Chervolesia throughout its colonisation period. In 2017 President Samuel Czenko announced scientific facilities and a military base would be constructed on the island, prompting backlash from the native populace and native representation groups for its disregard of the island's environment and ecosystem.

The island is referred to by two names, George Ruset Land by most of the world and Angisooqnuna by the native Titiqituq people. George Ruset Land was named after the 17th century king of Unio Trium Nationum by the island's discoverer Cosmin Martinescu, and has remained in use since. Angisooqnuna can be translated roughly as "vast land".

The presence of the Titiqtuq people is estimated to have began around 1200 AD, having migrated from northern Cassier to the island around that period. Some small settlements were built, but these consisted at most of small villages and fishing communities around the coast of the island.

The island was sighted and settled by an Amathian explorer by the name of Cosmin Martinescu in 1691 on his voyage to establish a Soravian colony in Asteria Superior after Yavorstrana's success in establishing the East Asterian Trading Company before. Martinescu writes in a documentation of his journey that strong winds had battered his ship for a majority of the journey, and that he did not intend to reach George Ruset Land, but rather the mainland Asterias. Despite the deviation, they settled the island and founded Rakovnica in the November of 1691. The Titiqituq people suffered initially from diseases brought over from the Soravian settlers that they had not developed resistence to, but these diseases were all but eradicated by the 1750s. Soravia stored a small flotilla at the island but these military ships were often used as fishing vessels rather than military ships.

Mt. Martinescu, Nanuk Island and Arnaqa Point were all discovered and named in the 1770s, on the first expedition to the north of the island. By 1779 most of the island had been documented and explored and George Ruset Land's position in the Lumine Ocean was known in relation to the Asteria's and Soravia. Soravian neutrality in the Asterian War of Secession brought prosperity to the colony, as well as Chervolesia, as they quickly became one of the largest exporters of fur as the western Asterian colonies struggled against their colonisers, greatly decreasing their ability to export. In the early 1800s Soravian settlers began to greatly outnumber the Titiqituq natives of the island, owing largely to the increasing number of ships departing Soravia for the Asterian colonies. The Asterian slave trade was never present in George Ruset Land due to its inability to harbour industry and hard labour, with many Soravians voluntarily travelling to George Ruset Land to make a living from fishing.

The island continued much the same through the early-to-mid 1800s, with fishing and fur continuing as the main exporters, although artifacts representing and manufactured by the Titiqituq people became a popular export due to their rarity, and ownership of one often displayed one's class. Due to the dwindling of the slave trade after the Estmerish ban in the 1700s, the Titiqituq people prospered from the manufacturing of their artifacts and many entered the Soravian upper class, some of the first natives of any Asterian colony to do so. The Law Regarding the Native Inhabitants of the George Ruset Land Colony, colloquially referred to as the "George Ruset Law", was brought into law in 1847, promoting the Titiqituq people to citizens of the Soravian Empire, entitling them to same rights as a Soravian or a Zalyk would in the mainland. Due to this law and the general liberality of colonial rule in George Ruset Land, the island suffered no separatism or conflict during the First Soravian Civil War, and became one of the final colonial holdings of Soravia following the conclusion of the war after Chervolesia had declared independence. It was designated as a dependency instead of a colony in the 1861 revised Constitution of Soravia.

Rakovnica began to grow in population as bigger and quicker ships to travel to the island were introduced in the late-1800s, and the industry of Titiqituq artifacts began to lessen as more and more natives began to take up usual jobs on the island or migrating back to the mainland. Fishing also suffered in Rakovnica as more modern occupations were introduced, however fishing was still extremely popular in more rural towns and subsistence farming still made up a majority of the rural populace's food income. 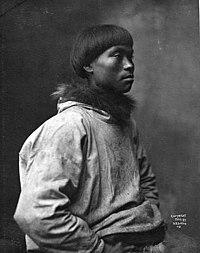 Portrait of Nukilik Qimmiq in 1941, the first native governor of the island

George Ruset Land saw no conflict during the Great War, but was the site of a few Soravian fleets patrolling the Lumine Ocean for Gaullican and Mariranan vessels. Nukilik Qimmiq became the first native governor of the island in 1940 and served until 1946. The first official census was conducted on the island in 1956 and recorded a population of around 290,000, a number which has since grown drastically. Tourism grew rapidly in the 1960s and in 1963 the Cosmin Martinescu International Airport was opened in Rakovnica, operating only between April and September and having only one runway. Titiqituq tour guides often took tourists around the island, especially to Mt. Martinescu and Arnaqa Point, which both became notable destinations on the island. Roads began to be constructed and cars imported to the island in the 1980s, with plans to a road connecting Rakovnica with the rural coastal villages around it, and another highway visiting all the destinations on the island before terminating just south of Arnaqa Point. By 1995, Rakovnica was functioning as any other Soravian city would, with small train and bus networks, a healthy series of roads and cars and an urban environment comparable to that of the mainland. In 2001, the Soravian government announced its intention to turn most of the untouched parts of George Ruset Land into nature reserves and scientific research facilities, which was completed in 2006. In 2017, controversy erupted on the island as President Samuel Czenko announced the government's intention to construct a military base on the island, which was the subject of large protests in Rakovnica by the island's inhabitants. While Czenko's government have not officially backtracked on the policy, construction for the base has still not commenced.

George Ruset Land sits in the far-northern Lumine Ocean, and is the northernmost permanently inhabited settlement in the world. It is geographically considered a part of Asteria Superior but is politically treated as a part of Euclea by the Soravian government and most other nations, due to its high Euclean populace. The closest country to George Ruset Land is Cassier, lying 1,557km away. Soravia lies just over 8,000km away, making George Ruset Land one of the most isolated places in the world.

The terrain is generally hilly, with the southern half of the island being covered by boreal forest and mid-to-northern parts of the island experiencing a more tundra and polar climate. The highest point on the island is Mt. Martinescu at 1,178m.

Soravian is by far the most spoken first language in George Ruset Land, and serves as the administrative language of the island, with 88.9% of the population speaking it as a first language. Titiqitaq is spoken by just over 10%, and is only taught in some schools on the island. The language is not an essential part of the Soravian curriculum. George Ruset Land is overwhelmingly Episemialist, in line with mainland Soravia.

George Ruset Land's economy is heavily reliant on tourism and fishing, with around 55% of the island employed in the tourism sector and 15% in fishing. Other significant sectors include scientific research, however scientific residents of the island are most often there temporarily, and live in one of the island's scientific bases. The island uses the Soravian Zolota. Due to poor conditions, most food that is not fish is imported from elsewhere, the majority of which comes from Soravia, which accounts for 88% of the island's imports. Most imports and exports leave through the Rakovnica Port or Cosmin Martinescu International Airport, also in Rakovnica. The capital of the island makes up around 97% of its $15.88 billion GDP. 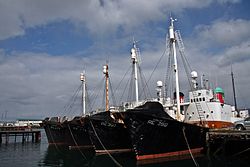 Fishing vessels in Patpuszta, the largest fishing village on the island

The culture of George Ruset Land is primarily Soravian, with some small differences from the mainland influenced mainly by the island's isolation, way of life and common contact with the Titiqituq people. Usual Euclean festivals such as Nativity are celebrated on the island, but one of the most renowned international festivals is the "Day of the Lights", referred to by the natives as Qaumamikqau. Celebrated every year on August 21 to honour Guutiineq, the tradition Titiqitaq god of fire, the Day of the Lights has become a famous festival on George Ruset Land that attracts tourists from around the world. It is around this period that the island sees the majority of its tourist income, with the entire city of Rakovnica being transformed in light of the festival.

Retrieved from "https://iiwiki.us/mediawiki/index.php?title=George_Ruset_Land&oldid=272293"
Categories:
Hidden categories:
This page was last edited on 7 November 2020, at 00:13.
Privacy policy
About IIWiki
Disclaimers