Unrest in the colonies can be traced as early as Gaullica acquired them, with religious differences in the north and cultural differences in the south leading to a common resentment of the 'Gaullican yoke'. Anger toward Gaullican rule only intensified following the institution of the 'Intolerable Taxes', which taxed fur trading and most exports.

The start of the conflict is generally accepted to have been in 1764, in the aftermath of the Kindalk Massacre, when Gaullican soldiers open fired on Sheahan protesters. News of the massacre spread like wildfire, and encouraged a number of mutinies and rebellions across the coast, most famously that of Fabià Falguras. The Continental Convention in 1765 led to the joint official declaration of secession from the United Colonies, and saw the Gaullican Empire respond by landing a new army.

While the colonies in New Estmere, Sheah and Nou Remana were the most active, there were other attempts at independence across the continent. The Patriote movement in Cassier made initial gains, but was ultimately routed by loyalist forces. The majority catholic Mhuire Republic cooperated with Gaullican forces to maintain its autonomy among the Amendist rebels.

While Gaullica was able to maintain some semblance of control across a great deal of the rebellious colonies, it would ultimately find itself under attack in Euclea. Estmere and Etruria, traditional Gaullican rivals, would come to the support of the colonies, declaring war on Gaullica. Meanwhile, Etruria's colony Marirana would launch attacks on Gaullican positions along their border.

Ultimately, the Gaullican Crown would be unable to reestablish direct rule over the west coast, and would be forced to sue for peace. In the subsequent Treaty of Vicalvi, Gaullica recognised the independence of the United Colonies, and was able to retain their loyalist colonies in Cassier. Estmerish and Etrurian involvement had proved decisive, but both states had failed to make any meaningful gains in territory, and had incurred great debts in doing so. The newly independent United Colonies would splinter, with Lorcania and Nuxica emerging from it. The two would prove to be new regional powers on the continent. 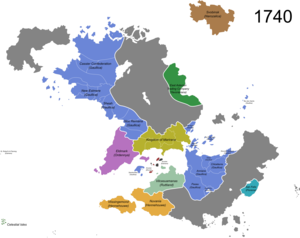 As shown, the Gaullican Empire dominated Asteria Superior in 1740.

By 1729, Gaullica had emerged as the undisputed hegemon in Asteria Superior. Their victory over Estmere and Caldia in the Gilded Wars by 1721 had led to Gaullican control over New Estmere and Sheah, while the ultimate defeat of the Floren Empire in the Pereramonic Wars had led to the Gaullican acquisition of Nou Remana. In one fell swoop, Gaullica had expanded their control from their northern settler-colonies in New Gaullica to the border of Novo Poveja and Geatish Eldmark in the south.

With their dominance on the western seaboard assured, the Gaullican colonial administrations exploited their advantage. Gaullica appointed loyal Governors from the metropole, and encouraged them to act with increasing power. The impressive autonomy that had been afforded to New Estmere and Sheah - cherished by their citizenry - slowly evaporated, while Catholic Gaullican-speakers were promoted to high-ranking positions in what became known as the 'Gaullican ascendancy'.

This naturally caused tension in the colonies, but it was accompanied by shifting sands across the continent. The Pereramonic Wars which had seen Nou Remana fall into Gaullican hands had also seen the emergence of the nascent Republic of San Marco, and the Floren colony of Augustanya had been spared Gaullican domination via its sale to the new nation.

Ultimately the inciting incident which brought the colonists in New Estmere, Sheah and Nou Remana against the Gaullican administration was the introduction of the 'Intolerable Taxes'. Taxing fur trading, exports and other staple industries in the colonies, the taxes placed a great strain on the colonies, and were widely derided as a result. The taxes served as a central point for which the rebellious to gather around, helping to galvanise opposition to the administration.

Battle of the Gulf

Battle of the Solarian

Collapse of the United Colonies