Olympus is a planet located in the Olympian Solar System2, which consists of 8 planets. These are, in order of closest to the sun; Hermes, Aphrodite, Greater Olympus, Ares, Zeus, Cronos, Poseidon, and Hades. Greater Olympus also has one moon and it's only natural satellite, Selene. Olympus along with the rest of the Olympian Solar System was formed billions of years ago from a solar nebula. Olympus has a long history of development from the earliest microscopic organisms to the now large nation-states that inhibit it today. Today over a billion people depend on Olympus's abundant natural resources and varied biosphere. Humans have developed many diverse cultures and societes; politically there are over 40‬1 nations.

The History of Olympus follows a somewhat similar path as Earth has up until about the Medieval Era. The largest distinction between Earth and Olympus emerge from this time period. Unlike Earth there was no “Great Divergence” between one continent and the rest nor was a “new world” discovered. Instead the sharing of ideas following innovations in ship building sparked an era of rational thought not unlike the renaissance and enlightenment throughout the world. The industrial revolution had heartlands throughout the world as industries collected themselves in dispersed pockets. That is not to say that this is a world of peace but it has kept the world far more fractured than our own. Regional powers exist but none strong enough to truly unite a region under its control. Superpowers have not risen from great empires and colonization as we know it, is a rare sight. Yes Olympus is similar to our own world but at the same time quite unique. 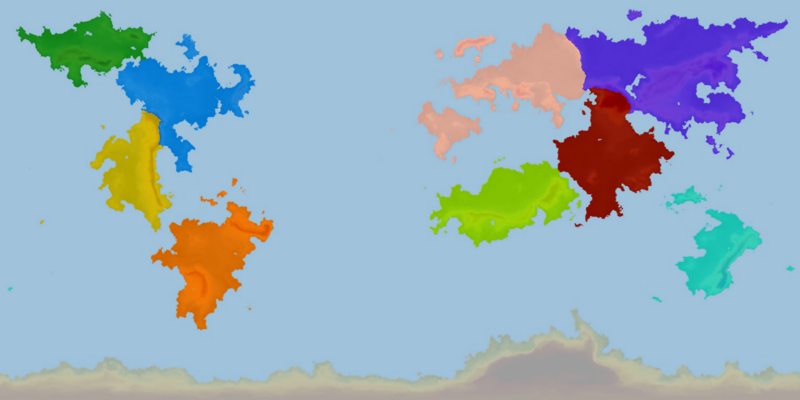 The following is a list of the 10 internationally officially recognized continents, as well as Kyros.

More than half of Olympus is covered in water. This abundence of water distinguishes Olympus from other planets in the solar system. The planet's hydrosphere consists primarily of the oceans, however, all bodies of water make up the hydrosphere. There are XX oceans on the surface: TBA.

The following are all the internationally recognized, independent countries currently in the world.

Religions that have a sizable following in Greater Olympus

These are articles of particular merit and associated links that are no longer considered canon within Greater Olympus. These may include articles from previous renditions of the region, or articles from the current version that no longer have relevancy.

1.^ Number is subject to change as more citizens join GO.
2.^ Name pending approval.
3.^ No permanent population due to its arctic nature.

Retrieved from "https://iiwiki.us/mediawiki/index.php?title=Greater_Olympus&oldid=447120"
Categories:
Hidden category:
This page was last edited on 14 January 2022, at 02:32.
Privacy policy
About IIWiki
Disclaimers