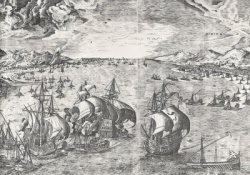 The Battle at Mintra, commissioned by King Damos of Velar in 1512 to depict the 1481 battle

Mintra was founded in the late 12th century as a Trellinese mercantile outpost on the eastern Sea of Velar. It became an influential centre in the region, financing rivals of the Kingdom of the Isles of Velar, leading to its being sacked in 1481. The city was attacked by Andamonian forces during the Trellinese Civil War, but they were repulsed.

Retrieved from "https://iiwiki.us/mediawiki/index.php?title=Mintra&oldid=13122"
Categories:
Hidden categories:
This page was last edited on 28 January 2019, at 21:27.
Privacy policy
About IIWiki
Disclaimers