The Sea of Velar, sometimes referred to as the Strait of Trellin, is an equatorial mediterranean sea in western Astyria, connected to the Sea of Jajich by the Straits of Jajich, which are 110 kilometres wide at their traditional meeting point. With the exception of the Straits, the sea is almost entirely enclosed by land. It divides Trellin into two roughly equal portions, north and south, and is bounded to the north by Trellin and the Dangish Empire, to the east by Heideland and to the south by Trellin, Txekrikar and Andamonia.

The shores of the Sea of Velar have been inhabited since prehistoric times, its rich waters being an important source of food for many of the early civilisations to develop there. Among the first civilisations to rise were the Velaric culture on the central islands and the Perenden civilisation in Andamonia. Trade routes spread across the entire sea, passing through the Straits of Jajich to the growing Hyseran Empire.

In the Middle Ages, the Kingdom of the Isles of Velar dominated the sea's central islands and much of its northern coast. It came into frequent conflict with the Principality of Txekrikar, which controlled swathes of land west to the Bight of Ternos, and the Grand Duchy of Ja'ekha. Trellinese merchants established a series of strategic trading posts across the sea, on various natural harbours that became known as the Trophy Ports. 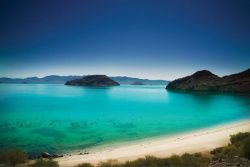 Five countries have coastlines along the Sea of Velar. They are:

Retrieved from "https://iiwiki.us/mediawiki/index.php?title=Sea_of_Velar&oldid=13639"
Categories:
Hidden categories:
This page was last edited on 31 January 2019, at 06:25.
Privacy policy
About IIWiki
Disclaimers