Until 2014, Andamonia exerted control over the cities of Rha'gutza and Khorvu, former Trellinese Trophy Ports which were reclaimed by Trellin during the War of the Eastern Velar. In the aftermath of the reoccupation and Andamonia's subsequent attempt to invade Txekrikar, government control collapsed throughout much of the empire as regional militias and factionalism precipitated a civil war dubbed the War of Integrity. In the aftermath of this civil war, emperor Amahuiz Tlacapilzi announced the dissolution of the monarchy and the end of the Second Andamonian Empire.

Andamonia has been plagued by social and economic problems since the 1930s, when the long Trophy Wars, fought against Trellin, deepened the empire's decline. It remains one of the poorer countries in Teudallum. 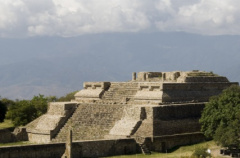 The first major civilisation to rise in Andamonia was the Perendic civilisation, which grew up along the Sea of Velar. The Perendi, who prospered on trade with the civilisations in the western sea, regularly came into conflict with the Velaric civilisation on the major islands. The upper strata of Perendic civilisation were heavily influenced by the peoples with whom they traded, and their culture increasingly mirrored the Nahua and Hyseran cultures. Until the early twentieth century, it was widely held that Andamonia's ruling class was an immigrant population that had imposed itself on the native culture, but it is now believed that there was no such large-scale migration, but rather that the Perendic culture was simply more malleable and impressionable when faced with more advanced civilisations such as that of Hysera. As Hysera lost territory to Trellin and its importance as a trading partner for Andamonia waned from the middle of the first century BC, Perendic culture underwent a resurgence in the city-states of its heartland. Polities such as the temple-city of Teraxi Yú fought vicious wars for primacy in a rearranging Andamonia; the legacy of their rise to power in first-millennium Andamonia was the spread of the Old Andamonian language hundreds of kilometres south of the coast, becoming the chief language of the First Dynasty centred on the small city of Zadé Axochizin.

By the early twelfth century, the territory of the Andamonian emperors extended to the coasts of the Sea of Velar from their capital in Zadé Axochizin. The empire fought a number of wars with the Kingdom of Velar and Principality of Namija for overlordship of the city-states on the Olahu Peninsula. The Velarans conceded, more interested in protecting their territories in the northern sea, but Namija waged long and bloody defensive wars to cling onto its vassals. It was still deeply involved in Andamonian politics in the fifteenth century, when the wars of Velar and the Coalition of the East forced its attention elsewhere. The Andamonian emperors seized on this lull to consolidate their coastal holdings, uniting their dominions under a strong central government.

The Namijans returned to Andamonia in the early sixteenth century, at a time when Velaran strength was at its nadir and east Velaran politics had stabilised. They brought with them gunpowder and firearms, which had never before been seen in Andamonia, but the interests of these Namijan ratafran were scientific and exploratory rather than military. Nevertheless, they soon came into conflict with local rulers, and in the Battle of Teraha a party under Miylex Roisersis was ambushed and massacred. Their weapons were looted by the victors, who had already seen their destructive power and understood their potential use in a coup. Andamonia thus entered a period of civil war, as its northerners stole or bought firearms from the Namijans and rebelled against the empire, though ultimately without success as the emperor turned to his neighbours in Txekrikar for assistance in restoring order.

Xichiel II ascended the throne in late 1742. As a child, she had been devastated by the loss of her mother in 1724. Blah blah.

Xichiel's death, on 15 May 1784, left Andamonia without a claimant to the throne for the first time in more than 800 years. She had no children and no relatives close enough to be automatically in line to succeed, and she had made no indication in her life or in her will as to what should happen to the throne. The empire's administration, however, fended off all claimants and ensured that the country was not left vulnerable during this lapse. Researchers appointed by Xichiel's aide, Ziarec ha'Vashuhala, suggested that the house of Tlacapila, from Lasasu Isnin, was of sufficient competence and venerability to succeed the extinct ha'Aucahare dynasty.

The Guns of Belziroa, by Orot Jai Remarsna, shows the bombardment of the fortress of Belziroa by an Andamonian fleet

In 1844, the Tlacapila dynasty was removed from power in a short but bloody civil war as republican radicals in the Grand Assembly and the general populace rose against the monarchy. In its place they installed the Andamonian First Republic. Under the First Republic, Andamonia transitioned from an absolutist regime into a liberal and progressive democracy. By the 1870s, reformist momentum had died down, and the 1871 presidential election saw a candidate, who would go on to win the election, call for a short war of conquest against Txekrikar. The Baira Debacle was an inconclusive war that Txekrikar initiated after repeated provocation by the republican government of Muriaz Raihanri. When the war ended in a stalemate, support for the republic was at an all-time low.

After years of decline, the First Republic collapsed in 1892 after revolutionary fervour from the Trellinese Civil War spilled over into Andamonia, and in the aftermath a civil war and multiple coups resulted in a new republican government which lacked popular support throughout the country. In 1895, its solution to dwindling public favour was an invasion of the three eastern Trophy Ports. Trellin, already caught up in a civil war, proved unable to protect Khorvu and Rha'gutza from predation, and the attack on Mintra was only repulsed with the assistance of the Namijan provincial government.

The Second Republic nevertheless failed to achieve the popularity the early First Republic had enjoyed, and in 1913 it fell to a military coup which restored the Tlacapilzi dynasty from exile. Under the guidance of Turaehoc III and his commander Hanrel Mata, Andamonia was aligned with the Northern Powers during the Great Astyrian War. An invasion of eastern Txekrikar, a Trellinese client state, brought the Usmalím region under Andamonian control. A secret treaty prepared shortly before the war had arranged for the navy to harass merchant shipping of the Western Powers. Although this brought Andamonia into conflict with Arimathea and other Western Powers, Andamonia retained the Usmalím and significant portions of Txekrikar at the end of the war.

Just six years later, and as a direct consequence of the 1895 occupation of the Trophy Ports, Andamonia was invaded by Trellin in what came to be known as the Trophy Wars, an ultimately failed attempt by the Sidereal Crown to recapture Rha'gutza and Khorvu. The war lasted more than seven years and saw both sides engage in atrocities and conflict which at times matched or exceeded that of the Great War. Trellinese forces gained the upper hand in the later years of the war, advancing on Zadé Axochizin itself, but did not hold the Trophy Ports by the time peace negotiations began. These subsequently broke down, with neither regarding the war as either a victory or defeat, and as both refused to concede territory the de facto conclusion was uti possidetis.

Andamonia's landmass of 744,164 square kilometres is located entirely between the Equator and the Tropic of Capricorn. It is bordered by the Aztec National League, Cassonne, Heideland and the Trellinese protectorate of Txekrikar and bounded to the north by the Sea of Velar. The country is almost entirely continental, with only two islands of any size (the larger is 94 square kilometres) and one pene-exclave at Sarmize. Its territories previously included the cities of Rha'gutza and Khorvu, but these were surrendered to Trellin in late 2014. The western border of the country is delineated by the marshlands of the Usmalím, now a territory of Txekrikar. This region, which includes the western fringes of Olahu and Tirati provinces, was historically important for salt farming.

The northeast coast is primarily covered in dense rainforest, with extensive mangrove colonies along the shore. In the last century much of this has disappeared due to illegal logging and urbanisation, especially the growth of major cities such as Teraxi Yú and Alacuaha. Westward along the coast the forest gives way to grassland and low hills which rise to high sea cliffs over the Txekrian Gulf. The Komekli province and the interior of the Olahu Peninsula consist of rough, low mountains and hills, also substantially forested. This region's karst landscape is caused by an underlying geology of limestone, which is eroded quickly by water.

The interior and south of the country is mainly grassland and savannah. The Lichuxeta, a large grassy plateau, is encompassed within the provinces of Cuyuotl and Ahaltlím. This highland gives way to scrub and sandy desert in the far south. The Rohocar Desert, on the Aztec and Cassonnaise borders, contains some of the tallest dunes in Astyria. The eastern provinces, such as Kakotlahi and the Ubeylatl, are characterised by bright red and yellow fields of rapeseed and poppies.

Andamonia is governed as a constitutional republic, with an elected president as its head of state. The current and first president of the Third Republic is Azanj Timaloc, who was elected in December 2016 concurrent with the dissolution of the Second Andamonian Empire by Emperor Amahuiz Tlacapilzi. 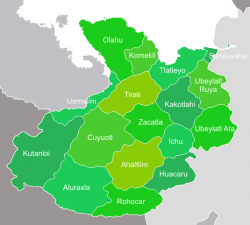 Provinces of the Andamonian Empire, as of October 2014.

Local government is organised along the same boundaries as those for election to the Grand Assembly, into sixteen provincial governments. Prior to the War of the Eastern Velar, there were nineteen provinces, including Cohorvu, Rahagusa and the Andamonian Usmalím which were governed by local councils overseen by an appointed governor.

Most freight in Andamonia is moved by railway. Substantial rail traffic comes across each border, and Andamonia is used as an intermediary for discreet trade between Cassonne and Heideland. The largest rail company in the republic is Patapoztotla, a semi-state company which owns 60% of the national inventory of tracks and carries 80% of all passengers. It is an AstyRail member as of November 2017.[1] 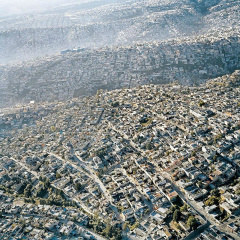