Miró's Retreat (Urbonic: Narefna Mirókon; Trellinese: Ürsanai Miróka) was a major episode in the War of the Velaran Succession, lasting sixteen days, from 19 March to 3 April 1770. After the Siege of Txir, Prince Miró commanded a lengthy fighting withdrawal in which his forces marched some 230 kilometres (140 mi) from Txir to the south of Semeria. They were closely pursued by several Trellinese armies under the overall command of the Earl of Jajich, and skirmishes between Miró's rearguard and Jajich's forward units were frequent. A number of small pitched battles were fought along the way, as Miró seized opportunities to whittle away Jajich's forces.

Jajich began the pursuit with an army considerably larger than Miró's, but he was beset by logistical difficulties from beginning to end. The Semerian countryside was a hotbed of anti-Trellinese sentiment, and he struggled to gain ground on the retreating Velarans. In the meantime, the reinforcements he expected from the mainland were instead diverted to fight other sieges across the island. In contrast to this, the Velaran forces only increased in number. Although much of the population had been disheartened by the loss of Miró's stronghold, his more radical supporters were galvanised to rush to his aid, and Miró had at times enough soldiers to face Jajich in open battle. However, some of the Velaran nobility fought in support of Trellin's king Elcmar IV, and at battles at Toroi and Mariuaz they won victories over Miró. These were insufficient to force his surrender, and on 3 April he reached the port of Lisimiu and boarded ships for Adazakh, where he would make his last stand. 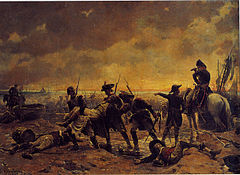