Battle of the Bay of Parthenope

The Battle of the Bay of Parthenope was a major naval battle of the War of the Velaran Succession, fought on 29 January 1770. As part of the Trellinese siege of Parthenope led by Modriq, Duke of Lindros, a fleet under Admiral Gharat Reqriu and Arimathean Commodore Teqial Jureniv attempted to blockade the entrance to the harbour but failed to prevent Velaran blockade-runners. The battle was the result of Reqriu's attempt to capture one such group of ships as it left the port.

On 27 January, after a large Velaran convoy made it through their blockade, Reqriu and Jureniv were ordered to intercept it on its return. Poor foresight and tactics on Reqriu's part allowed much of the convoy to clear the Trellinese line once more before he moved to intercept, and he was forced to abandon his pursuit as he attempted to capture what ships remained within the bay. The battle ended in failure for Reqriu, who was temporarily recalled for court-martial as a result.

The Velaran capital of Parthenope was a key strategic target in Trellin's campaign against Prince Miró of Txir, and it held additional significance as the site of the coronation of the Kings of the Isles of Velar that made it a necessary conquest. After Arimathea's navy defeated a Velaran fleet off the coast of Morikz on 15 November 1769, it was possible for the Trellinese to land a substantial force under Modriq, Duke of Lindros to besiege the city. Admiral Gharat Reqriu and Commodore Teqial Jureniv were to use their combined fleets to prevent entry into the harbour in support of the besiegers onshore. Without enough ships to complete the blockade, however, it was possible for Velaran ships to deliver supplies and troops to the city's garrison. After a particularly disgraceful failure on Reqriu's part, when eighteen Velaran transports and six ships of the line ran the blockade on 27 January, he was ordered to capture them on their return and use the ships to block the harbour entrance.

At dawn on the 29th, Reqriu received word that the Velaran convoy was preparing to leave the harbour. He immediately ordered his ships to draw up on one side of the bay, by the Partxa Spit, and ordered Jureniv to draw up on the other side. Jureniv positioned his ships broadside to the port, while Reqriu faced the port head on.

The Velaran fleet, under Commodore Azinto Súkiret, sailed out two abreast, its ships of the line in the vanguard and two brigs from Parthenope bringing up the rear of the transport convoy. As they entered the range of Reqriu's flagship, the Tanëot, he ordered a warning shot fired. Súkiret's vanguard fanned out, putting on sail to close the distance more quickly. The Arimathean ships fired their broadsides at the approaching warships, the Torovekai targeting the Amuzkam's masts and rigging with chain-shot. As it became apparent that the Velaran fleet intended to run the blockade once more rather than stay to fight, Reqriu had his ships turn around, firing an ineffective salvo in the process. Most of the Trellinese ships began piling on sail to match the Velarans' course and speed, though the Difrihen and Jazhargo found themselves unable to manoeuvre with the rest of the fleet around them and remained facing the oncoming convoy. 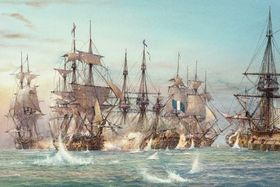 As Súkiret's vanguard reached the Trellinese line, according to the journal of the Mahkiyda's captain, Tarmüz Roskenti, "each side unleashed hell on the other with neither hesitation nor mercy" as they discharged broadsides without restraint. Reqriu's ships now attempted to sail parallel to the Velaran warships, which quickly switched out their regular shot for chain-shot in a bid to cripple their pursuers. The Trellinese frigates, falling behind the larger vessels, engaged the transports, with the Jazhargo attempting to cut across them and block their escape.

With the gap between the transports and the main combat widening, Jureniv pulled his squadron out into the harbour entrance and entered the battle. It was increasingly chaotic; just fifteen minutes into the combat the magazine of the Difrihen exploded, destroying the ship and killing most of its crew of 550. The Arimathean frigates Rhisafna and Torovekai pulled up on either side of the Amuzkam, which was limping ahead without its mainmast, and proceeded to exchange heavy fire with the larger ship.

Outnumbered and slowed by damage to their rigging, the Trellinese ships of the line were falling behind their quarry, with the Balinik riding dangerously low in the water. Reqriu gave the order to abandon the pursuit, turning around to intercept the transports. The rear of the battle was a rout as the transports attempted to evade the frigates and the Arimathean seventy-fours. The Amuzkam and Rhisafna's masts and rigging had become locked together, and the Velaran ship's crew was attempting to board the frigate as the Torovekai continued to fire on the sinking warships. Three of the transports had been sunk, with the Nartiya successfully boarding and capturing a fourth, but the remaining fourteen were quickly escaping.

The Arimathean seventy-fours were not positioned for pursuit, though they managed to block the brig Lasthia's path as it skirted the flotsam in the centre of the harbour entrance. Heavily outgunned, its captain surrendered without another shot. The Helcalope, unobstructed meanwhile, raced for the entrance and fired off several salvos at the Rhisafna, speeding its demise. As the Rhisafna and Amuzkam submerged, still entangled, both crews abandoned ship and were picked up by the other nearby vessels. Despite coming under intense bombardment from the returning Trellinese warships, all but one of the surviving transports managed to elude capture or destruction.

The damage to the Trellinese fleet was considerable, with the Balinik and Difrihen both having sunk, the former with all hands lost - some 612 casualties. The Rhisafna also proved unsalvageable, though much of its crew had been rescued before it sank with the Amuzkam, whose crew had been captured by the sailors on the Torovekai.

The defeat of what was, in practical terms, the largest Trellinese fleet afloat in the Sea of Velar was very nearly disastrous for the Sidereal Crown's campaign on Napocis and necessitated immediate reinforcements from the capital. Gharat was recalled to Martheqa to face a court-martial, though he distinguished himself in battle off Heka when his ship was attacked while en route and was permitted to return to the campaign.

Though the damage to the Velaran convoy had been no less significant than that suffered by the Trellinese and Arimatheans, with five ships sunk and two captured, they escaped with most of their vessels and were able to arrive on the Pelnan coast two weeks later to rescue the army under generals Heruyel and Laidakon. This allowed their army to later partake in the defense of Txir and assist in Miró's Retreat, dragging the war out for many months longer.

Still unable to blockade the port, Lindros' siege of Parthenope dragged on for weeks more until the Earl of Jajich and Prince of Garsaf captured Txir and ended the Velarans' repeated supply runs. Parthenope finally fell on 4 May 1770.