The Siege of Parthenope was a major siege conducted between 21 November 1769 and 4 May 1770 by the Trellinese army under Modriq, Duke of Lindros during the War of the Velaran Succession. The Trellinese aimed to capture Parthenope, the capital city of the Kingdom of the Isles of Velar, and attempted to encircle the city on land and sea. The heavily outnumbered garrison resisted for months as Velaran convoys repeatedly ran the blockade to resupply the beleaguered city.

As the siege progressed, the attackers developed an extensive network of siegeworks involving trenches and wooden forts to prevent landward access to Parthenope while much of Napocis remained hostile to the Trellinese campaign. Contemporary sieges at Styuno and Qaina, among others, tied up manpower Duke Modriq insisted he needed for the conquest of Parthenope. Blockade-runners continued to defy the Trellinese and Arimathean fleets in the bay until the Siege of Txir, the origin of most convoys, culminated in the capture of that key city. The siege at Parthenope was the largest of the war until Teyra, although Txir involved more casualties in a shorter time.

Parthenope was the royal seat and administrative centre of the Kingdom of the Isles of Velar. At the outbreak of the war, it was the meeting place of the Velaran nobles who had nominated Prince Miró of Txir to take the throne. It was therefore almost immediately recognised as the focus of the Trellinese campaign to suppress Miró, but Velar's initial naval superiority kept Napocis, an island that overwhelmingly backed Elcmar's rival, free from Trellinese armies. The major Battle at Kalodin, on 15 November 1769, was the turning point in the war at sea and allowed Duke Modriq to land ten thousand men on Napocis within days. 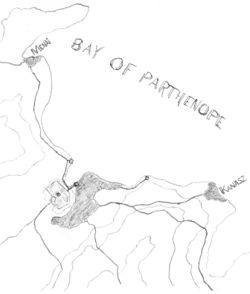 A map of Parthenope and its environs c. 1770

Parthenope lies halfway along a large, roughly crescent-shaped bay in the northwest of the island of Napocis. A long and narrow u-shaped inlet comprises the city's harbour, with minor fortifications at its entrance. From the 1670s, new fortification schemes had been engineered to protect the city. Construction stalled in the 1710s until the work was completed with funds from the Trellinese treasury between 1739 and 1745, commemorating the union of Elcmar IV of Trellin and Velar's Queen Tarien. Parthenope's Old Town was entirely ringed by thick stone and masonry walls, with multiple cannon batteries facing the harbour and all landward approaches, and separated from the Middle and New Towns by a 160-meter divide. The Old Town was furthermore built atop an acropolis that rises 97 metres (318 ft) above sea level.