The New Phork Underground (also known simply as the Underground) is a rapid transit system serving New Phork in Philimania.

Construction of the New Phork Underground was prompted by a study, released in 1970, commissioned by The Philimanian Legislative Council to find solutions to the increasing road congestion problem caused by the city's fast-growing poppulation. Construction started soon after the release of the study, and the first line opened in 1972. The New Phork Underground was immediately popular with residents of New Phork; as a result, subsequent lines have been built to cover more district. There are continual debates regarding how and where to expand the network.

During the early 1960s, The Philimanian Legislative Council saw a need to accommodate increasing road traffic as New Phork's population grew rapidly. In 1963, Philimanian transportation consultants Norland, Rox, James & Associates were appointed to study the transportation system of New Phork. On 1 September 1964, the consultants submitted the New Phork Mass Transport Study to the government, which recommended the construction of a rapid transit rail system in New Phork. The study suggested that three rail lines be developed in six stages, with a completion date set between December 1970 and December 1978. Detailed locations of lines and stations were presented in the study. These three lines were the Spring Line (from the Spring-Charingham Interchange to Spring Hall), Capital Line (from Maxwell School to Connery Road or the Milieunt Ita), and Charingham Line (a circular line that goes around the district).

In 1965, the Philimanian government authorised construction of the Initial System. 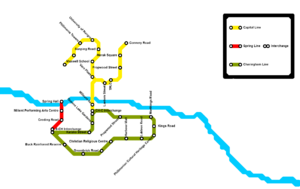 Construction of the Initial System commenced in October 1965. The Capital Line was completed on 1 September 1970. The first train drivers were trained on the London Underground. The Spring and Charingham Line opened in January 1971 and November 1971 respectively. The first lines was designed by a consortium of consultants led by Smith and Partners. On later extensions to the railway the stations were designed under the supervision of Gorden Wasp, the chief architect at the New Phork Underground Corporation.

The Initial System was opened on 12 January 1972 by Mayor Losan MacLeon. Trains were gradually extended to seven cars to accommodate an increase in passenger numbers. 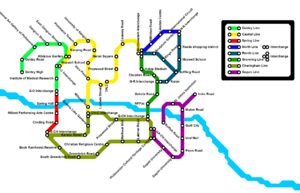 The government approved construction of the Oakley Line in 1977, then known as the Oakley Extension, and works commenced in February 1978. The project added a section to the system, from Oakley High to the Spring-Oakley Interchange, which was a new station added to the network to the Spring Line. The Oakley Line started service on 1 August 1982 with a total cost of construction of P$1.6 billion (US$653.1 million).

in 1980, the government grants the construction of a large project to expand the New Phork Underground to the eastern disticts, Gapan, Grunning, and North New Phork District. Construction commenced in March 1981. On 17 May 1986, the 3 lines which were the Gapan Line, Grunning Line, and the North Line was opened. Furthermore, each train was extended to nine cars.

The decision was made in October 1990 to construct a new Airport Line to connect Foster International Airport. Construction started in April 1992 and completed and opened in June 1998.

When the Inital System lines opened in 1972 it was advertised with a maximum temperature of 60 °F (16 °C), but over time the tube tunnels have warmed up. In 1989 approval was given for a ventilation improvement programme. A 2000 study reported that air quality was seventy-three times worse than at street level, with a passenger breathing the same mass of particulates during a twenty-minute journey on the Reeds Line as when smoking a cigarette. The main purpose of the New Phork Underground's ventilation fans is to extract hot air from the tunnels, and fans across the network are being refurbished, although complaints of noise from local residents preclude their use at full power at night.

Originally access to the platforms of the stations was by stairs. The first escalator on the New Phork Underground was installed in 1977 and from the following year new deep-level stations were provided with escalators instead of stairs. The escalators had a diagonal shunt at the top landing. In 1985 a recorded voice instructed passengers to stand on the right and signs followed. Travellers were asked to stand on the right so that anyone wishing to overtake them would have a clear passage on the left side of the escalator.

There are 508 escalators on the New Phork Underground system and the longest, at 50 metres (164 ft), is at Buck Rainforest Reserve. The shortest, at Gangrun Street, gives a vertical rise of 5.9 metres (19.4 ft). There are 126 lifts, and numbers have increased in recent years because of investment making tube stations accessible for the disabled. 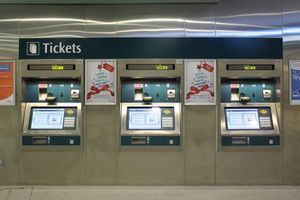 The Moreno card is a rechargeable contactless smart card used in an electronic payment system in New Phork developed by the New Phork Underground Corporation. It was launched in July 2001 for use on the New Phork Underground and now is the most widely used electronic cash system for transactions in New Phork as many retailers (including supermarkets, car parks and fast food outlets) are fitted with readers. The technology used was Sony's Felica line of smartcard. The Octopus card uses radio frequency identification (RFID) technology so that users need only hold the card in front of the reader, without taking it out of handbags and wallets.

According to the New Phork Underground By-laws, eating, drinking, or smoking are not allowed in the paid area of stations or in trains. Offenders will be fined up to P$2000.

Various campaigns and activities are taken to help ensure that the New Phork Underground is a safe system to travel on. Poster campaigns displaying information on topics such as escalator safety are a common sight in all stations, and announcements are made regularly as safety reminders to travelling passengers. By-laws were also introduced to deter potentially dangerous actions on the New Phork Underground, such as the ban on flammable goods on and rushing into trains when the doors are closing. Penalties ranging from fines to imprisonment have been imposed for such offences.

Police officers patrol the trains and stations, and police posts are available at some stations. The New Phork Police Force has a Railway District responsible for the New Phork Underground. Closed-circuit television cameras are installed in stations and on some of the newer trains.