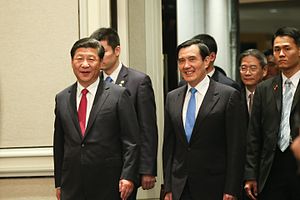 The Nuclear Arms Limitation and Non-proliferation Talks are a series of bilateral conferences between the Republic of Senria and the Auspicious Republic of Xiaodong regularly held every 5 years since 1999. The purpose of the talks are to promote arms control and reduce nuclear proliferation, with particular focus on Xiaodong's nuclear arsenal which is currently in contrivance of the Treaty of Shanbally.

The talks were first convened in 1985 when new developments in intercontinental ballistic missiles led to a renewed arms race between the two countries. The first talks were seen only as moderately successfully with Xiaodong agreeing to limit development of ICBM's but refusing Senrian demands to take steps to de-nuclearise alongside the terms of the Treaty of Shanbally. Talks were not held again until 1999 when a more comprehensive treaty was negotiated which endorsed a five-year freeze over missile development, albeit with Senrian prime minister Kiyosi Haruna negotiating several opt-outs for sea-based missiles for the Senrian Republican Navy.

In 2004 another conference saw under reformist leaders Sigesato Izumi and Han Guanzheng concrete progress made with both nations agreeing to temporarily ban new missile programs (a new missile defined as one with any key parameter 5% better than in currently deployed missiles), so both sides were forced to limit their new strategic missile types development and construction, such as the development of additional fixed ICBM launchers. However the agreement was never properly ratified in the Senrian National Assembly. Another round of talks in 2009 between Hayato Nisimura and Yuan Xiannian saw both countries agree not to renew the 2004 agreement.

The final talks were held in 2014 between Nisimura and Jiang Zhongyu. However no progress was made at this meeting with both countries rather then attempting to negotiate a new treaty instead endorsed a limited declaration of mutual values that committed to peace in Coius. Talks scheduled for 2019 were indefinitely postponed due to the 2019 Estmere-Zorasan Crisis with proposals for a new conference failing to occur.

The talks have been praised for maintaining a more stable relationship between Xiaodong and Senria and rationalising tensions between COMSED and ROSPO. However they have been criticised by some for legitimising Xiaodongese nuclear weapons or encouraging Senrian nuclear development to a much greater extent as well as being ineffective and a poor substitute for normalised relations between the two countries.

Retrieved from "https://iiwiki.us/mediawiki/index.php?title=Nuclear_Arms_Limitation_and_Non-proliferation_Talks&oldid=211044"
Categories:
This page was last edited on 25 May 2020, at 09:06.
Privacy policy
About IIWiki
Disclaimers