The Prime Minister of Estmere (Swathish: Forġerėf af Ėastmẹrland, Flurian: Premier d'Estme) is the head of government of Estmere. As per the Northabbey model, the Prime Minister acts as the leader of the executive branch and is also a member of the Chamber of Commons, the legislature.

The incumbent is Zoe Halivar of the Progressive Social Democrats, who has served as Prime Minister since 3 June 2021. There has been x Prime Ministers, the first being Rupert Pennrible, Earl of Calliwell. The longest serving Prime Minister of all time was Sir Percival Augustus Hargreave, who served for 32 years, while Robert Reynolds was the longest serving in the republican period, serving for 9 and a half years.

The position of High Bailiff, under the late Vernon dynasty, has been compared to the later position of Prime Minister, though notably it was accountable only to the sovereign, not to Parliament or the wider population; the position was abolished with the ascension of the House of Hardouin. After Parliament emerged as a powerful institution, it was not uncommon for the Lord Speaker of the Chamber of Lords to act as a leader and representative of the body, though this was generally in an unofficial measure, was without legal precedence, and was generally opposed by the monarch.

The position of Prime Minister was first established in 1701, though prior to this it was common for a prominent individuals to emerge as a primus inter pares among the Cabinet ministers; it was not uncommon for these figures to also be royal favourites. A number of former prominent ministerial cabinet positions, such as Lord High Steward, Lord High Chancellor and Lord High Treasurer, were merged into the new position of Prime Minister. 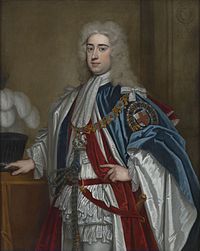 The Earl of Calliwell was the first Prime Minister of Estmere, being appointed by Louis III on 14 November 1701. Parliament and wider politics at the time was divided between two camps, both of which traced their origin to the Last War of the Counts. The two factions were the Royalists, who believed in the divine right of kings and parliamentary subservience to the Crown, and the Legalists, who believed in popular sovereignty and constitutional monarchy. Louis III detested the Legalists, and hoped that by empowering Pennrible, a staunch Royalist, he could mitigate their power in the Chamber of Commons. Pennrible was a capable political actor, and through a consolidation of Royalist power, he was able to weaken the hold that the Legalists had on the lower chamber. He served as Prime Minister for just over twenty years.

Louis III's death in 1736 led to the ascension of Mary II, who was considered a patron of the Legalists. Mary dismissed the Earl of Delafontaine, replacing him with the Duke of Ponsonby, another Royalist. The Duke only served briefly, however, and was replaced by Legalist leader Sir Percival Augustus Hargreave, a favourite of Mary and the first Prime Minister from the Chamber of Commons. Hargreave served as Prime Minister for almost thirty three years, and established most of the customs and powers associated with the role of Prime Minister. The relationship between the Prime Minister, as head of government, and the head of state was also slowly established, as the majority of administrative functions were granted to the Prime Minister and the monarch became a less active observer.

The kingdoms of Estmere and Borland entered into personal union in 1774, when the death of the childless only child Mary II saw the throne of Estmere inherited by the king of Borland, who became king of both countries as Edward I and IV. The parliaments of the two countries remained distinct until the crown passed to Edward II in 1789, who worked with the Estmerish Parliament to bring Estmere and Borland together into a closer union. After a brief interregnum and the defeat of the Weranian Revolution, the kingdoms were united into the Kingdom of Estmere and Borland in 1801, and the Borish legislature was subsumed into the Estmerish to form a new legislature.

Compared to other heads of government, the Prime Minister of Estmere has few amenities and privileges. This is due to custom; the earliest Prime Ministers were members of the aristocracy, who generally did not need additional amenities, and Sir Percival Augustus Hargreave argued that the position ought to be difficult, and without reward, to ensure that the position never fell into the hands of a would-be tyrant, usurper or someone who would place personal gain above the interests of the nation. Nevertheless, over the years a few amenities have become attached to the office.

Style and form of address