Morwall, officially Greater Morwall, is the capital city state of Estmere, a constituent state within Estmere comprising the metropolitan county of the same name. The state borders Midland to the north, Lowland to the east, Roland to the south and Arvorne to the west. With an urban population of 8.7 million and a metropolitan population of 12.9 million, Morwall is the largest city in Estmere and in Euclea as a whole.

The city itself has a long history, being founded as a fort town under the Solarian Empire. It quickly grew into a major settlement, which by the time of the Hexarchy was a prominent market town. Following the Conquest of Estmere it grew further, and emerged as a national capital. It was a major hub for the Industrial Revolution, which saw the city rapidly increase in size, becoming a major manufacturing centre for Estmere. The city was damaged heavily during the Great War and the Occupation of Estmere, and after the war the city was rebuilt extensively, becoming a centre for immigration and emerging as one of the most diverse and multicultural cities in Estmere. The federalisation of Estmere saw the city of Morwall and its surrounding environs granted significant autonomy as a state within Estmere, leading to the creation of modern day Greater Morwall. The boundaries of the state were expanded in 1984.

The city state is centred on the River Mor, and is geographically bounded by the Hitchin Hills and the Bywolds. Greater Morwall is comprised of fourteen boroughs, which are responsible for local governance within the state. The elected borough councils which lead them are similar to city councils. City Borough serves as the administrative centre of the state and of the city. As a state within Estmere, Greater Morwall operates as a semi-parliamentary administration within a federal republic. Executive power is placed in the directly-elected Mayor, which has been Darrell Garner of the Progressive Social Democrats (PSD) since 2014, while the Greater Morwall Council functions as the legislature. Since 2019, the Council has been led by a PSD minority administration.

Morwall has consistently been ranked as a first-rate city by the World City Studies Institute. Greater Morwall is an important ecomonic hub for Estmere and east Euclea, with an economy comprising world-leading financial, manufacturing and service sectors. The Guild Quarter is an important financial hub, while Redwoods is a major centre for media. The city is home to the Parliament of Estmere, Moorwood House and other government buildings. The University of Morwall is a world-leading university at the cutting edge the natural, social and applied sciences, and the state is a hub for science, technology, research and development.

The city was named in the honour of Emperor Marinus, and was first known as Marinium, which was the name given to the settlement when it was first founded as a fort by the Solarian Empire. The city recieved the precursor to its current name during the time of the Hexarchy; the settlement became known by the Old Swathish name Morwealh, which derived from the term walhaz, in reference to the local Solaro-Albans who continued to inhabit the city long after the withdrawal of the Solarians. The name literally translated to "foreigners on the River Mor", referring to the major waterway on which the city is predominantly situated. After the arrival of the Verique during the Conquest of Estmere and the emergence of the modern Estmerish, the name Morwall emerged and solidified.

The official name for both the state and the metropolitan county is Greater Morwall, though both are often referred to as Morwall in passing. As the Swathish and Flurian are co-official minority languages below Estmerish in the state of Morwall, the names Morvẹll and Mèroual respectively are also sometimes used in reference to the city.

Morwall is known by a number of nicknames, some of which have gained official recognition and have been used in marketing by the Morwall government. 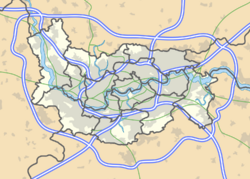 Greater Morwall spans the overwhelming majority of the low-lying land between the Hitchin Hills in the south and the Bywolds in the north. It is divided into the fourteen boroughs, which are primarily based on ancient townships in the area, but were only finalised in the 1930s. The River Mor is a major feature of the city, with the city centred on the river, comprising both the south and north banks of the river. It is located in the geographic centre of Estmere as a whole. Morwall was largely rebuilt following the Great War, and as such the city state has a high number of parks. The most prominent of these is Green Acres in Presdon.

The boundaries of Greater Morwall have been expanded twice; the border with Roland was first adjusted in 1951 to resolve a minor boundary dispute. The boundaries were expanded a second time in 1982. This expansion was more controversial. The aim was to transfer of a number of suburban townships on the basis that they relied on Morwall's infrastructure but did not pay taxes to maintain it. The proposals were met with local opposition, and the issue was only resolved when the Reynolds administration mediated the dispute, resulting in the surrounding states ceding the regions in exchange for federal funding.

Greater Morwall is a state within Estmere, with a degree of autonomy and devolution from the national government. The city state is run as as semi-parliamentary administration within the federal republic of Estmere. Darrell Garner of the PSD has been the directly-elected Mayor of Greater Morwall since 2014, and he exercises executive power, but acts through the legislature, the Greater Morwall Council, which also acts as a check on the Mayor's power. The council is responsible for setting the strategic direction of the city state, with powers over areas including housing, state-level taxation, the provision of some social security services, and transport. Together the Mayor and the GMC comprise the Greater Morwall Authority.

The PSD have been the largest party on the Greater Morwall Council since 1998, but has only had a majority on rare occassions. Since the 2019 council election, the PSD has governed as a minority administration with support from the Left Party and Hope Not Hate. The Sotirian Democratic Union is the largest non-governing opposition party.

Morwall is comprised of fourteen boroughs, which each act as local governments with powers similar to city councils elsewhere in Estmere. Each borough is run by an elected borough council. The borough councils are responsible for the provision of local services, such as refuse collection and parking, but unlike other city councils a number of powers, such as housing, are instead held by the GMC. The boroughs themselves also have smaller neighborhoods within them, but these have very few local government powers, and are largely ceremonial.

All boroughs have the prefix of borough, though the Borough of the City of Morwall has a longest prefix. All boroughs except two (Hedley and Kensworth and Shadwell and Allerton) have a single name. The boroughs can be divided into the traditionally affluent Outer Boroughs comprising Shadwell and Allerton, Hedley and Kensworth, Milfield, Guildley, Mormouth, Oxbrooke, Kingswood, and the traditionally poorer Inner Boroughs comprising Hartham, Southbeck, Presdon, Barbry, Darford, Worley. City Borough is usually considered an Inner Borough, but has many affluent areas.

Morwall is one of the most diverse cities in Estmere. According to the 2015 census, White Estmerish was the largest single ethnic group in the Morwall urban area, comprising 41.7% of the population. This figure includes Swathish and Flurian respondents. White Non-Estmerish comprised a further 13.5% of the population, with this figure predominantly including people from across the Euclean Community and from Etruria.

The oldest continuing minority group in Morwall is the Witterite community, which arrived in the 16th century and has maintained a presence in the city since then. The Atudites and the Mirites are other prominent ethno-religious groups in the city, with most having arrived after the Great War. Foreign-born people living in Morwall are common, and the five largest foreign-born groups are those born in Padaratha, Etruria, Rwizikuru, Borland and Dezevau.

Morwall has only two twin cities, and since 1959 the three cities have shared an exclusive arrangement where they only twin with each other. The three cities are all capitals, and are the three largest in Euclea. The sentiment is summarised in the following quote by Anthony Restout, Mayor of Morwall at the time; "For who else could be worthy of the Heart of Estmere, but the Flower of Gaullica, and the Pearl of Soravia? Who could be worthy of the Flower or the Pearl, but the Heart?"

In the 1980s Morwall began to explore relationships outside of the exclusive twinning relationship. Morwall maintains agreements of friendship and cooperation with a number of other cities.