The Quliyasi Jihad (Arabic: جهادالقلياسي ; Persian: جهاد قلياسي) is the umbrella term for a series of religious conflicts and wars between Mansuriyyah and the Liúşai League, mainly taking place in the 12th–15th centuries.

The rise of Mansuri caliphates and subsequent spread of Islam caused tensions with the predominantly polytheist religious milieu of the Liúşai League. These tensions escalated into armed conflict on several occasions, most notably in 1340–1349, when Sultan Baderkhan sent two great expeditions to the League, which were defeated due to logistics problems and the League's use of guerrilla warfare tactics.

The Quliyasi Jihad was a significant juncture in the histories of Mansuriyyah and Gylias. It was a major factor in strengthening hostility towards monotheism within the League, which later became a foundational part of the Gylian ascendancy. It contributed to a history of bad blood and poor relations between Mansuriyyah and Gylias, with consequences for Gylians of Mansuri descent.

The term is Arabic for "Gylian Jihad". Despite the conventional use of the term, it has been criticised by historians for its anachronism, as the term "Gylias" only emerged much later during the Gylian ascendancy, and thus would not have been in use at the time of the conflict.

The decline and retrenchment of the Rideva Empire, coupled with the rise of Mansuri caliphates, altered the regional dynamics of southern Siduri. The Liúşai League had enjoyed largely good relations with the Ridevas, despite the occasional border conflicts, and had an appreciation of Persian culture; northern and western Gylics were notably descended from Persians. However, the Arab takeover meant that the League was wary of the rising power of the Mansuris at the expense of the Rideva.

The Mansuri caliphates converted to Islam, but the state engaged little in missionary activity under the al-Bashiri caliphate. Most missionaries were travelling merchants, or Sufi masters. The odd state-backed missionary accompanied diplomatic missions, and occasionally engaged in preaching to convert neighboring rulers. When the caliphate declined, local rulers were even less interested in proselytism.

The emergence of the Rawwadid sultanate brought a change in policy. The Rawwadid sultans fancied themselves as protectors of the faithful and servants of the faith. They promoted and patronised the construction of madrasas and khanqahs throughout the empire, and indirectly promoted missionary activity through the increase in commercial activity and diplomatic missions. The decisive shift came under Sultan Baderkhan the Pious. He inherited a rich sultanate, with borders from the Nuadan Ocean to the Ruadak Sea, internal stability, and lack of external threats. He took a special interest in religious matters, establishing a waqf, and creating a diwan to oversee dawah.

While Islam had obtained a small following along Mansuri trade routes, tension with the predominantly polytheist environment of the Liúşai League was evident from the start. The League authorities treated Muslims with suspicion, seeing their monotheism as an exclusionary and alien presence, different from the zoroastrianism of the Persians that had a longer presence in the Gylic states.

The immediate spark for armed conflict was religious tensions in the neighbouring Scytho–Thracian kingdom. The efforts of Baderkhan's missionaries secured its king's conversion to Islam, and triggered a greater struggle for influence. In response, the League undertook reprisals against local Muslims accused of being agents destabilising the Kingdom. The clashes escalated into border skirmishes, and the Muslim Scytho–Thracian chieftains requested aid from the Rawwadid sultan. Baderkhan sent an armed force to protect these communities, which worsened the situation. Full-blown conflict erupted in 1340, when Baderkhan declared jihad against the Liúşai League. 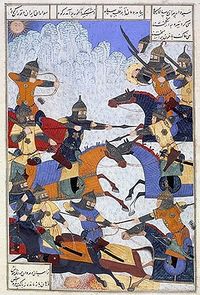 The Rawwadids sent a large army to link up with their Scytho–Thracian allies and attack the Liúşai League. Their strategy on land aimed at the two main entrances to the League: the southern Tandar coast and the northern Mytin Pass. The League's strategy was primarily defensive, and aimed to block passage, ideally forcing the Rawwadids into narrow and unfavourable terrain. Sizeable fortifications were constructed, including the Tanan Wall behind the Anta river.

The Rawwadid army boasted superior training and equipment, but faced major disadvantages: it was operating away from home, across the sea, and in a terrain and climate unfavourable to its troops, used to relying heavily on cavalry tactics. The Gylics' use of terrain, guerrilla tactics, and psychological warfare caused serious defeats for the Rawwadids and their allies. The expedition ended prematurely, and a civil war erupted in the Scytho–Thracian Kingdom, in which the League supported the traditionalist faction.

Following the initial defeat, Baderkhan sent a second expedition a few years later. This new army was more adapted to fight the new enemy, but still suffered the strains of operating away from home. It obtained partial success, taking hold of small tracts of territory, but lost its momentum following the death of Baderkhan in 1349. His successor Sultan Abdulhakim gave priority to internal matters and regional affairs, relegating the jihad to a second plane.

The conflict would continue in the form of small border skirmishes and raids, and it would take another decade until another major expedition to be launched, following major League pushbacks and demands for help from the Rawwadids' allies.

The conflict was largely a stalemate. Despite continuous sackings, raids, and captures, the border remained largely static, and the two sides engaged in a prolonged game of tug of war with territory. Neither side had the logistical strength or manpower to achieve a decisive breakthrough: the Rawwadids could not muster the necessary force and transport it safely to the border, while the Gylics refused to conquer additional territory, lacking the necessary population and resources to sustain a campaign of annexation.

The frustration caused by protracted and seemingly worthless battles combined with the religious dimension to produce an exceptionally bitter conflict. The Rawwadids grew increasingly furious at the resistance of the Gylic "infidels", and in turn the Gylics and non-Gylics stuck by their traditional beliefs as an assertion of superiority.

Two of the best-known Gylic commanders of the conflict, Longinus and Kopreus, gained fame for their attempts to induce metanoia in enemies, and turning psychological warfare tactics against the monotheists. These included depriving them of the opportunity to die as martyrs or spread their religion, as they were convinced that the Muslims were fanatics who welcomed death and suffering. Beyond the border, League authorities drew increasingly sharp distinctions between Arabs and Persians, as part of an effort to sow ethnic divisions and separate the two to weaken the sultanate. 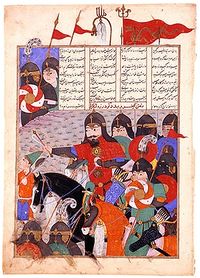 On the Rawwadid side, the most well-known military leader was Qushbashi Efendi, who commanded the first expedition. He became known for his ruthlessness and heavy-handed tactics. Historians believe he was captured in an ambush, but his final whereabouts remain unknown. Another famous individual is Shaykh Irfan Shah, a Sufi master who tried several times to broker peace between the warring sides and act as a mediator. On the Rawwadid side, two distinct groups emerged out of the brutal fighting:

Gylic and Mansuri chroniclers alike bemoaned the mindless devastation and seeming pointlessness of the war. One Mansuri scholar wrote that the Quliyasi Jihad managed to turn Gylics into "the most tenacious and resourceful enemy" of Islam in Siduri, and others condemned the atrocities committed by Rawwadids in the name of conversion. Anna Komnene stated in the Liusiad that "one can hardly account for all the lives and talents wasted on warfare to the exclusion of nobler pursuits", and similarly feared that the religious aspect of the conflict hardened Gylic attitudes towards outsiders.

The Rawwadids and their allies began to withdraw from the conflict in the 1420s. The cumulative impact of internal unrest and threats from other rising powers made the commitment of further troops and resources to a continuous stalemate untenable.

Following the Muslim withdrawal, the Liúşai League authorities staged several punitive expeditions, retaliating by crossing the border to physically destroy any traces of Muslim presence in the vicinity of their states. The bulk of this violence was aimed at sites of worship and copies of the Quran, many of which were destroyed and burned.

Many Muslims that had lived in the Liúşai League left for Mansuriyyah as a result of rising suspicions and hostility. The few that remained either abandoned their faith, hid it, or were exiled.

The Quliyasi Jihad had catastrophic consequences for both sides of the conflict. The Rawwadids lost significant credibility as a result of their failure to conquer the Liúşai League, and the resources and manpower wasted on the conflict weakened them later on against internal conflicts and external threats.

The conflict turned the Gylics violently against monotheism. Authorities treated monotheist religions and proselytism as a threat to the public peace. Policies were introduced to suppress monotheism and bar its adherents from settling in the League. However, as historians note, the Gylic authorities followed Longinus and Kopreus' precedent, concentrating on preventing proselytism, without concern for monotheists' beliefs as long as they weren't trying to spread them.

The foundation of hostility to monotheism and use of religion as a mobilising element of identity played a key role in the Gylian ascendancy, especially as Xevden adopted a monotheist state religion in an attempt to shore up its rule. This cemented hostility to monotheism as an element of Gylian identity, with monotheism perceived as a totalitarian force, and affected relations with Mansuriyyah significantly up to the present.

The failure of the Quliyasi Jihad coincided with the decline of the Mansuri Rawwadid dynasty, and historians agree the event contributed to the downfall of the empire. It marks the end of Rawwadid expansion and a period of inward focus. It also saw the rise of a new type of religiosity, with a focus on personal spiritual purification through poetry and mysticism. Some cultural implications of the conflict persist to this day, with Mansuris regarding Gylias and its culture as inimical to their own values and quintessentially opposite to them, despite both peoples not having had another military conflict since then.

Retrieved from "https://iiwiki.us/mediawiki/index.php?title=Quliyasi_Jihad&oldid=242414"
Categories:
This page was last edited on 25 August 2020, at 05:46.
Privacy policy
About IIWiki
Disclaimers