The National Obligation period (French reformed: Période d'obligation nationale) refers to the period of economic crisis that occurred after the Liberation War, roughly corresponding with the transition from the Free Territories to Gylias. The period, lasting from 1958 to 1962, was defined by rationing, reconstruction, and the beginning of radical economic restructuring, including the initial trial-and-error phase of the National Prices Board.

The Free Territories' economic models were implemented throughout Gylias. Significant changes included socialisation of the economy through cooperatives, and the move towards a Lange model market socialist economy. The National Prices Board was established to administer price controls. It had to work these out through a process of trial-and-error, which consumed much of the ensuing 4 years.

Rationing was a hallmark of the period, administered by the Ministry of Rationing. While both rationing and price controls had been implemented piecemeal in the Free Territories, they were more successful at the national level. Ration books and stamps were used for basic goods; luxury goods operated under less restrictive allowances. Rationing came to include food, clothing, furniture, fuel, paper, and at some points electricity. Some consumer goods that were not rationed were still hard to obtain due to shortages of components.

The Free Territories' diversity of monetary and non-monetary systems was preserved, with the þaler as an anchor. Even so, Gylias confronted the need to finance reconstruction and development. Financial repression policies were adopted to channel resources towards this goal. Mass savings movements were organised, and the government issued bonds, promoting their voluntary purchase through patriotic campaigns, serving as a peacetime equivalent of war bonds. These savings campaigns lent the period its name.

Gylias' entrance into the Common Sphere was also beneficial, resulting in aid, expertise, and new partners from which to borrow to finance deficit spending. 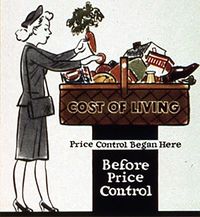 The National Obligation period helped the Gylian economy weather the transition. The combination of mass savings, bonds, and use of complementary currencies, scrips and promissory notes allowed the National Bank of Gylias to stabilise the money supply while reconstruction proceeded. Massive public works projects throughout the country helped keep unemployment down, and stimulated the economy. Despite the challenges, Gylias avoided recession in 1958–1962, and average growth was 2,9%.

Rationing accomplished its goal of preserving living standards and guaranteeing adequate food, clothing, and shelter. Rationing minister Neelie op het Mensink championed the policy; her jovial personality and optimism aided broad public acceptance. Nevertheless, the Darnan Cyras government feared a backlash and being associated with "shortages, greyness, and austerity". Rationing was officially abolished in 1961, with the Ministry of Rationing renamed to the Ministry of Resource and Land Administration.

While rationing was abolished on paper, Neelie maintained sufficient powers and regulation to maintain an unofficial system that guaranteed universal access to basic goods, and helped reduce waste. She advocated rationing as morally superior to "mindless consumerism and hoarding", praising its ability to guarantee everyone an equal share at a cheap price, and its promotion of conscientiousness on the part of consumers.

The NPB's trial-and-error methods ultimately paid off, despite the strains of the period causing an increase in prices, and it became a well-established element of economic planning alongside the Hermes Programme. The licensing of merchants, proliferation of community markets, and flexible approach to rationing helped keep the black market under control.

An outfit made by a Gylian university student, circa 1960

The National Obligation period is conventionally seen as a necessary prelude to the economic boom of the 1960s–1970s and the Golden Revolution in full flight. It was a period in which economic matters largely took the spotlight; many Golden Revolution reforms began during this time but would not achieve their full effect until afterwards.

Despite the inevitable frustration of the Free Territories' prefigurative ambitions being delayed to an extent by the economic crisis, the success of the National Obligation period had a great effect on public morale. In resorting to rationing, price controls, and savings, Gylias showed willingness to choose the tougher path and make sacrifices to preserve the anarchist ideals of the Free Territories.

Rationing proved its advantages by preserving adequate living standards and guaranteeing adequate food, clothing, and shelter. Food rationing is credited with improving public health by ensuring a varied diet, while the clothing industry was steered towards a spirit of stylish frugality embodied in vêtements règlementaires.

The period imprinted Gylian society with a "can-do" spirit. Traits such as resourcefulness, reciprocity, and cooperation were prized, reinforcing the egalitarian and mutual aid values instilled by the Free Teritories. Orgone films gained widespread popularity, their depictions of resourceful and stylish characters making do with what they had and helping each other reflecting a romanticised take on daily life in the National Obligation period.

While rationing was officially abolished in 1961 and the period ended with the transition from the Free Territories to Gylias being completed, many of its fundamental aspects endured, from its impact on Gylian society to its role in promotion of socialised luxury. During the 1990s, Aishwarya Devi's policies of reducing consumption for sustainability purposes deliberately evoked the memory of the National Obligation period, and earned her comparison to Neelie as one of Gylias' most powerful and influential resource ministers.

Retrieved from "https://iiwiki.us/mediawiki/index.php?title=National_Obligation_period&oldid=200587"
Category:
This page was last edited on 4 May 2020, at 09:59.
Privacy policy
About IIWiki
Disclaimers