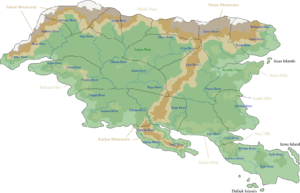 Gylias is a coastal nation in south-eastern Siduri. It is bordered to the north by Knichus and Cacerta. With an area of 1.728.328 km², it is the fifth largest country in Tyran.

The climate of Gylias is mainly tropical, with areas of alpine climate.

Gylias' natural landscape is dominated by plains. The two main plains are Laişyn, in the west, and Niavelin, in the east.

There are three principal mountain ranges in Gylias: Salxar, Naryn, and Kackar. Salxar and Naryn lie in the north and mark much of Gylias' border. Their high altitudes and lack of valleys has historically made them a barrier to movement, and allowed Gylic peoples to base their defensive strategies around possessing the strategically important Mytin Pass.

The Kackar range emerges from the Naryns and traverses Gylias north to south, interrupted only by the Ţikona river valley. The Kackars divide the Laişyn and Niavelin plains, and are considered the main boundary between eastern and western Gylias.

Gylias has numerous rivers. This has shaped historical settlement patterns, with cities tending to be located on coastal areas or rivers, and has proven advantageous for transportation and energy.

The most significant rivers are:

Many rivers are used to mark the boundaries of regions, including the Kaşar, Ţikona, Nazar, Nisár, and Tarna.

Gylias' climate is predominantly tropical savanna climate, with the exception of mountainous areas that have an alpine climate.

The Tropic of Cancer passes through the country.

Gylias averaging some 2.500 hours of sunlight annually, and receives steady rainfall throughout the year.. The generally pleasant and predictable climate is a well-known feature which has influenced lifestyles and society.

Gylias is home to a variety of plants and animals. Vegetation is largely tropical, including moist broadleaf forests, grasslands, and temperate mixed forests in the mountainous areas.

Gylian fauna is typical of a tropical climate country. It consists of approximately 200 mammal species, 620 species of birds, 130 species of amphibians, 270 species of reptiles, and nearly 330 species of fish. The country's national animal is the Morpho peleides, or Peleides Blue Morpho butterfly. Seagulls and cicadas are also unofficially regarded as "national animals" due to their presence in local culture.

Much of Gylias' mineral reserves are found in mountainous areas. They include deposits of gold, silver, copper, nickel, potash, and some iron.

Gylias has among the most comprehensive, voluminous, and stringent environmental regulations in Tyran. These include:

Gylias has high rankings for environmental sustainability in Tyran. The country has many national parks and nature reserves, dark-sky preserves, well-preserved fauna and flora, and urban planning based on principles of the sustainable city.

Owing to the sizeable area and comparatively low population, more than half of Gylian territory is not used for agricultural, industrial, or residential purposes. Much of this uninhabited territory is maintained as protected areas, national parks, and nature reserves. These have contributed significantly to tourism in Gylias.

Landscapes of Gylias
Retrieved from "https://iiwiki.us/mediawiki/index.php?title=Geography_of_Gylias&oldid=361449"
Category:
This page was last edited on 18 June 2021, at 19:18.
Privacy policy
About IIWiki
Disclaimers