Human habitation in Kirenia can be traced to approximately 20,000 BCE, primarily in the Kiire basin and the Neeves; tribal groups of Tenic and Kirenic peoples first inhabited the area by around 1,200 BCE. At its height, the Solarian Empire was bounded in the north-east by the River Kiire; during this period, a small upper class of Kireno-Solarians existed — although it had disappeared entirely by the empire's collapse. Small states coalesced in the absence of a larger authority, but were quickly overshadowed by the threat of the nearby Rudolphine Confederation and Verliquoian Empire. For the next few centuries, Kirenia — particularly the resource-rich eastern regions — was in a state of constant flux, facing incursions from the Rudolphines and the Verliquoians, for whom Kirenia functioned as an intermittent and turbulent intermediary zone. For much of the Middle Ages, the northern coast and outlying regions were dominated by the Maritime Guild; its defeat by the Third North Sea Empire, however, split the alliance and ended the long-held status quo in Kirenia, with the Rudolphine Confederation using the opportunity to extend its influence across much of the region — even beyond the areas that it directly controlled. This led to large-scale Weranic settlement in modern-day Kirenia, and the prevalence of the Weranian language as a lingua franca for much of history. By the beginning of the 16th century, the multitudinous Kirenian states had been brought under the loose rule of Harimisaareke, which used its central location on the Kiire to slowly secure power over the region. Victory in the Ten Years' War consolidated the state into a cohesive unit, and marked its establishment as one of the great powers of Euclea. This was exemplified by its intervention in the Weranian Revolution, attempting to suppress Weranian nationalism on three seperate occasions — in 1801, 1821 and 1828 — in order to protect its Weranic-speaking holdings. These conflicts would serve as the precursors to the disastrous War of the Triple Alliance — from which Kirenia would emerge intact — albeit while sustaining heavy territorial concessions and a sharp decline in its influence abroad.

Thoroughly demoralised in the wake of its defeat, the Kirenian monarchy was popularly perceived as the "sick man of Euclea" during the latter half of the 19th century. However, under a policy of rapid industrialisation known as the taastamine ("restoration"), Kirenia became one of the economic powerhouses of the continent; it created one of the world's largest working classes as rural farmers moved to the cities in ever-greater numbers. Thus, it was hit particularly hard by the Great Collapse, and the subsequent Airdale War with Estmere — although temporarily successful for the country — intensified the dire situation. Shipbuilders' unions in Neem and Hästi Kastekud led strikes to protest worsening economic conditions; rather than making way for reform, however, tension between the government and the workers would soon lead to violence. As republicanism grew in popularity amongst the citizenry in early 1919, radical cells took advantage of the climate by assassinating Juhan VII, directly leading to the April Revolution. The ensuing Verised Päevad saw the country split along ideological lines, leading to armed conflict, political persecution and large-scale property damage; ultimately, the councilists emerged to form the ensuing Kirenian state, minus the newly-independent Alsland.

At the height of the Great War in 1931, Kirenia joined the Grand Alliance; in collaboration with its erstwhile opponents in Werania and Estmere, Kirenia advanced into Functionalist Gaullica and reclaimed its historical borders. Following the end of the war, Kirenia became an integral component of the post-1935 geopolitical order, but soon began to come into conflict with its neighbours: Kirenia supported the establishment of East Miersa under the Godfredson Plan, and, during the Solarian War, tacit Kirenian support of the URT hindered CoN efforts in Etruria. In 1950, tensions between Kirenia and Werania erupted into the Kirenian-Weranian War, and in spite of a decisive Kirenian victory, the conflict ended remaining goodwill between the major players of the post-war political landscape. Nonetheless, an emboldened Kirenia would go on to upscale its activity abroad, becoming the first nation to develop nuclear weapons, sponsoring the foundation of MASSOR and the AIS, and directly intervening in conflicts such as the Miersan War and the Kabu Civil War. In recent years, with the establishment and continuing development of the Euclean Community, relations between Kirenia and the states of Eastern Euclea have warmed to cordiality; cooperation between the socialist and liberal nations of Euclea has steadily increased during the 2010s and early 2020s.

Kirenia is recognised as the homeland of socialism in the world, participating in the Mutual Assistance Organisation and the Association for International Socialism. Additionally, it is a member of the Community of Nations, with a permanent seat on the Security Committee. Kirenia is a great power and — in accordance with the Treaty of Shanbally — is one of the seven nuclear-capable nations mandated by the Community of Nations. Kirenia's modern-day geopolitical actions are still perceived as an exercise of hard power: its ongoing management of overseas military bases, coupled with its supply and funding to allied armed forces, has been a core component of Kirenian international relations since the 1950s. However, he downturn in the efficacy of its declining blue-water navy has been cited as evidence for an increasingly soft power-focused foreign policy, in which Kirenian influence abroad is spread not through the presence of armed combatants, but instead via the establishment of a working relationship with the Global South.

Kirenia is the Estmericised form of the native Kiiremaa, meaning "land of the [River] Kiire". The name of the Kiire derives from the Proto-Weranic *gīraz, meaning "fast" or "swift". This refers to the fast-flowing nature of the Kiire, particularly above Harimisaareke; it acted as a formidable obstacle for territorial expansion, as it was impossible to ford and expensive to bridge. Names for the area deriving from the term *gīraz were popularly used by the states of the Rudolphine Confederation during the Early Middle Ages, before entering mainstream usage in Kirenian.

Prior to the April Revolution, the form Cirenia was common amongst the states of Eastern Euclea, but the installation of the revolutionary government saw a policy of Kirenisation and Kirenia was chosen as the official Estmerish name in 1920. 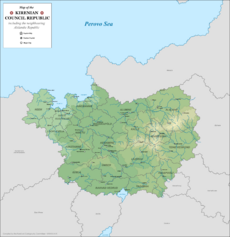 Kirenia is one of the extant socialist countries in the world, having been the first to adopt a communist system of government at a national level. Constitutionally, it is a council democracy in which representatives are elected using a tiered model: citizens, organised into a kommunaalüksus ("communal unit"), appoint their representatives to the basic local assemblies. In turn, the representatives in these assemblies appoint their own representatives to higher-level delegations, which continues until each seat in the Suur Volikogu is filled. Unlike many other countries, including its neighbouring Euclean democracies, the separation of powers — as advocated by Alexandre Seyres — is not enshrined in Kirenian statute law. The executive and judicial branches are comprised of members of the legislature: executive committees and courts are appointed at each level of government by their respective delegations. Effectively, this creates a system in which the enactors of law are responsible to the legislature itself; in turn, the members of the legislature are directly responsible to voters. Kirenian voters can choose to remove their representatives through the process of a recall election, which can be organised at any point in an election cycle. This cultivates the proliferation of an imperative mandate, aiming to ensure that elected officials effectively represent their constituents.