Jump to:navigation, search
This article is about the country in Kylaris. For other uses, see Borland.

Borland (/ˈbɒrlænd/; Borish pronunciation: /ˈbɔrlɑnd/, Weranian pronunciation: [ˈbɔɐ̯lant]), officially known as the Republic of Borland (Borish: Republick op Borland, Weranian: Republik Borland), is a country in Eastern Euclea, which is bordered by Estmere to the south-west and west, Werania to the north, Azmara to the north-east and the Gulf of Assonaire to the south. The capital and largest city of Borland is Newstead, other major cities including Westhaven, Olham, Stunhill, Outhall and Werlaigh.

• attempt by Richard I of Estmere to secure Borland, defeated 1050 → formation of league, acceleration of unification

Borland is located in Eastern Euclea on the coast of the Gulf of Assonaire, spanning from the coastal plains of Duneland in the east via the plains and hills of the centreregions to the hills, valleys and mountains of the northwestern region of Finstria and Burgh. The country is bordered by Estmere, Werania and Azmara.

Borland is divided into three parts: Finstria in the north, Hethland along the coast and Weyland inbetween, with Finstria having the status of an autonomous region due to the large Weranian minority and its history. These parts are further divided into provinces, called yends, and further into cryes (counties) and steads (cities). Until the early 1940s, the governance of Borland was — with the exception of Finstria — heavily centralized. Since then, however, cryes and steads in particular were given increasingly more competences and responsibilities.

Borland has a comparatively small military, officially referred to as “Armed Forces of Borland”. After independence, it was created to ensure the sovereignty of Borland, though the country started demilitarizing during the 1940s due to the prolonged period of peace in most of northeast Euclea since. Since the beginning, the Borish military has been a professional army, with conscription never having been implemented. Currently, it stands at around 2,500 active servicemen, though that includes not only soldiers, but also doctors and nurses, amongst others. They are most known for their work as national guard, border control and, formerly, as riot police.

Demographically, several splits between different population groups can be observed within Borland. The most significant of these include the ethnolinguistic split of Borland (into Estmerish, Borish and Weranian) and a split on religious boundaries. Historically, this was within Sotirianity into the Amendist and Catholic churches, though a variety of (Amendist) Free Churches have been founded since the early to mid 20th century.

At 34%, Estmerish is the most widely spoken primary language in Borland, followed by Borish. There is a strong discrepancy in the relationship of Borish and Estmerish as primary languages and as native languages, with 56% of inhabitants of Borland claiming Borish as their native language (many of whom say they grew up bilingually, mostly speaking Estmerish as a first or second language), while less than 30% claim to speak primarily Borish. This figure is the opposite for Estmerish, with 38% stating to speak Estmerish natively, but with 65% claiming to speak it as primary language in their everyday lives. 28% of Borish nationals speak primarily Weranian, with only 2% primarily speaking the fourth recognized language of Borland, Azmaran.

Most Borish are proficient in at least two of the four national languages, many also being proficient in at least one foreign language. 90% of Borish claimed to be fluent in Estmerish, rising to 96% in provinces other than Finstria-Burgh, with 60% being fluent in and a further 26% saying they have at least conversational knowledge of Borish. With the national languages (Estmerish, Borish, Weranian and Azmaran), most speakers speak local dialects of a given language rather than the standard form in their everyday life, with the proficiency in the standard form of the language varying across the country, but moreso across social classes.

The most common foreign languages other than Estmerish to be studied in Borland are Estmerish, Gaullican and Weranian, with students typically being most proficient in Estmerish, and in the north, also in Weranian. 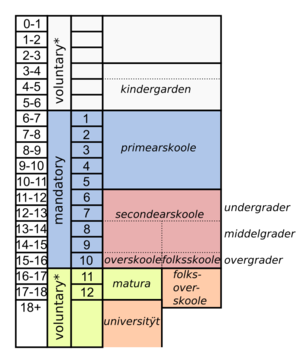 A diagram explaining the eduacation system of Borland.

Education is universally accessible and mandatory for ages six to sixteen (or years 1 to 10). The school system is divided into primary schools (years 1–5) and secondary schools (years 6–10), later into universities and professional schools which vary in length of schooling. Generally, schools in Borland are public since private schools had been temporarily banned after the country’s independence and only few private schools have opened since. Private kindergartens (including pre-schools) are widespread, however.

Primary schools (Borish: primearskoolen) are the first level of public education in Borland, with years 1 to 5 being nearly identical in all schools across the country in terms of the curriculum. One of the differences between primary schools is language education, with school children usually being instructed in their native language if available. Attendance of primary schools is mandatory starting with age six, with children who will have turned six over the course of the first semester of a given school year usually still being included, thus starting to go to school at age five.

Secondary schools (Borish: secondearskoolen) are subdivided into two types, both of which go from year 6 to 10. Years 6 and 7 are called “undergrades” (undergrader), years 8 and 9 are “middlegrades” (middelgrader) and year 10 (depending upon definition as well the years 11 and 12) is referred to as “overgrades” (overgrader). Attendance is mandatory until grade 10, or, until one reaches the age of 18 (though normally, students graduate from secondary school at age 16). Graduating from secondary school, students have to pass an array of exams at the end of year 10 which are called “general comparative exam” (GCE for short). Most professions require a GCE certificate, oftentimes passed above a set minimum mark and in specific subjects, and passing GCE with an average of 05/15 or better is required in order to be permitted to pass on to years 11 and 12, thus being a requirement for the matura exams.

Retrieved from "https://iiwiki.us/mediawiki/index.php?title=Borland_(Kylaris)&oldid=301418"
Categories:
Hidden category:
This page was last edited on 20 January 2021, at 23:11.
Privacy policy
About IIWiki
Disclaimers