The Senrian Occupation of Jindao was a military occupation of the city of Jindao, then under the colonial rule of Gaullica but effective military control of Xiaodong, by the Republic of Senria from the Senrian victory in the Battle of Jindao on May 17, 1933 to the signing of the Treaty of Keisi and subsequent handover to Estmere on April 23–25, 1935. Gaullican colonial governor Égide Brassard was the final governor of the city, but was shot by a Senrian sniper after trying to flee the city on May 15. The occupation is known for its brutality, which displayed a series of mass murders and deportations by Senrian troops. The occupation was one of the longest Senria held on the Xiaodongese mainland, lasting almost a year and a half. The occupation saw the population of Jindao decline by almost 20%, a number that would only take until 1937 to recover.

Almost immediately after Jindao was seized from Gaullica, Senria declared martial law in the city and gave soldiers in the city almost unlimited powers over the civilian populace. Emphasised by the authoritarian rule of Hatirou Nakayama due to his losses in the Senrian Genocide, and in line with the Nakagawa Plan's provision that Jindao was to ultimately be Senrianized and annexed, Jindao was led fiercely by the Senrian general throughout the occupation. The Senrians renamed many of the major landmarks in Jindao to Senrian-equivalent names, with many street names and districts also being given Senrian names, whilst their Xiaodongese counterparts were outlawed from use. Senrian became a mandatory language to learn for the populace whilst under occupation.

The administrative and military headquarters for the occupational government were set up in the Islands district, making it difficult for guerrilla forces or terrorists to reach the building, the waters being guarded by the Senrian Navy. The military also comprised all political infrastructure within Jindao, including the judiciary, which made the persecution of Xiaodongese prisoners-of-war, some 4,500 of which were captured within Jindao, extremely easy for the Senrian government to achieve. Xiaodongese troops were kept in harsh prisoner-of-war camps and typically sent to Senria as forced labor or executed within months, mainly in the Chih Te Mo Internment Facility in the south-west of the city. By 1934, the city had lost most of its explicit Xiaodongese characteristics.

Policing in Jindao was conducted by the military, with patrol units often roaming the streets in lieu of an organised police force, which the Senrian government never arranged. Strict curfews were issued throughout the city and those seen outside their residencies outside of curfew hours were regularly shot on sight and their corpses disposed in public places as a warning to other civilians for the consequences of disobedience. St. Chloe's Hospital routinely became full with injured Jindanese civilians in 1933 until Nakayama transformed it into a military hospital and forbade the staff from treating non-Senrians.

The local economy of Jindao suffered heavily as Senria tried to rapidly integrate the city into the expanding Senrian keiretu economic system. Reserves of the Jindanese denier were seized and physical money was often stolen in raids on civilian homes. The Jindanese denier was often used to fund the Senrian war efforts in Xiaodong, while the currency itself was quickly made illegal tender and replaced with the Senrian yen. Despite oppressive rule by the Senrians in Jindao, the city was made a priority to repair, mainly due to the aspirations of both Imahara and Nakayama to gain the city in the resulting peace treaty with Xiaodong and the Entente. Although the emphasis on a rebuild assisted Jindao somewhat, many of its core institutions faltered due to widespread damage throughout the city. Conscripted labourers from Jindao were often used to repair roads, buildings, and to Senrianise the city, while the majority were deported to the island of Tousuu in Senria to assist in rebuilding efforts. Banks, mainly Xiaodongese and Gaullican, were targeted by Senrians as a means to propagate Senrian influence over the city, with many of the banks being liquidated to make way for new Senrian institutions. Many non-conscripted labourers were unemployed within the city, a large portion of whom shipbuilders, whose workplaces were targeted by Senria during air raids over Jindao to limit the Entente's naval ability in the Bay of Bashurat.

While many actions by Senria in the region would today be considered war crimes, the Great War lacked the necessary legislation to prohibit such actions. Due to this, Senria was never prosecuted or tried for its crimes in the region. Some of the more notable crimes include the Wujin Massacre, where 257 civilians were shot on August 18, 1933, the Actions of 1934, where civilian killings by Senrian troops spiked enormously throughout 1934, and forced labour camps throughout the city. Senria often used retaliation for the Senrian Genocide as the reasoning and motive behind their crimes in Jindao. Many monuments have been constructed in Jindao to remember the occupation, the main one being the Lien Telan Memorial Cemetery, which commemorates those who lost their lives during the Great War and subsequent occupation. It is named after Lian Delan, who spoke out against Senrian crimes and was executed on November 10, 1933. 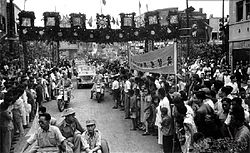 As the victory for Senria in Xiaodong drew nearer, the question on who would take control of Jindao began to arise. Senria remained adament that they gain the city as a crucial outpost on the Xiaodongese mainland that would bolster Senrian influence in the region, however the Euclean powers of the Grand Alliance discouraged this and instead insisted on a Euclean power taking control of the territory. With immigrants swifting returning to Jindao from Xiaodong, Senria, other Bashurat nations and often Euclea itself, the Jindanese population rebounded remarkably quickly, as too did its economy. An estimated 65,000 forced labourers from Jindao were returned to the city from Tousuu as the Euclean powers forced peace on Senria and Xiaodong.

The Treaty of Keisi signed on April 23 guaranteed that Jindao would be returned to a Euclean power, in this case, Estmere won the battle on sovereignty of the city, and immediately made preparations to transfer the city from Senrian occupation. As such, the Estmerish colonial delegation landed on the Metropolitan district in the north side of the city, and were met with large crowds celebrating the end of the brutal occupation. Estmere began the process of de-Gaullicanising and de-Senrianising the city, removing Senrian street names, granting charters to affected banks during the war and implementing the new currency, the nacar. By 1937, Jindao had recovered from its wartime losses and began to be a symbol of peace and freedom in Coius.

Retrieved from "https://iiwiki.us/mediawiki/index.php?title=Senrian_Occupation_of_Jindao&oldid=181911"
Categories:
Hidden categories:
This page was last edited on 27 March 2020, at 23:23.
Privacy policy
About IIWiki
Disclaimers