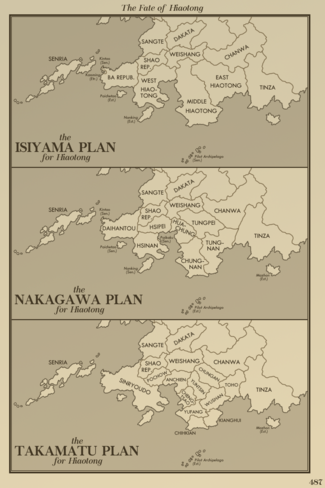 A comparison of the Isiyama, Nakagawa, and Takamatu partition plans, from Edmund Huxley Chatham's 1949 book The Great War and Its Consequences.

The Nakagawa Plan (Senrian: 나까가와께까꾸 in Kokumon, 中川計画 in Gyoumon, Nakagawa keikaku ; Xiaodongese: 中川计划, Zhōngchuān jìhuà) was a plan for the post-Great War occupation and partition of Xiaodong by the Grand Alliance powers, primarily Senria, proposed by Senrian admiral and Minister of Rites Iturou Nakagawa in 1933. The plan called for the annexation of several Xiaodongese territories to Senria and Tinza, the partition of Xiaodong into several smaller nations (two of which could potentially be annexed into Senria following planned Senrianization programs), and the near-total deconstruction of both Xiaodong's industrial capacity and national identity, with the endgoal of permanently destroying Xiaodong's ability to threaten Senria or the balance of power in Coius.

The Nakagawa Plan was one of several plans considered by Senrian leadership for how to deal with Xiaodong after the war, with other plans notably proposed by Isao Isiyama and Kasayosi Takamatu. All of these plans called for some partition of Xiaodong into multiple smaller states, but varied in the number of states Xiaodong was to be partitioned into and in where and how Senrianization ought to occur; Senrian leader Katurou Imahara ultimately selected the Nakagawa plan as a middle route between Isiyama's plan, which he considered too lenient to Xiaodong, and Takamatu's plan, which he regarded as overly ambitious and potentially impractical. Imahara's Euclean allies were vehemently opposed to the plan, which they regarded as too extreme; Euclean leaders raised concerns about the plan potentially inspiring intensified Xiaodongese resistance, which would prolong the war, and feared the potential geopolitical consequences of giving Senria blatant hegemony over South Coius.

A copy of the plan was captured by Gaullican intelligence operatives in August 1934, who leaked it to the Xiaodongese government and to the press. While the reception in Senria was largely positive, the public reaction to the plan was broadly negative in both Allied and Entente nations in Euclea. Xiaodongese propaganda also seized heavily on the plan, using it to galvanize Xiaodongese opposition to the ongoing Senrian invasion of Xiaodong; several militia divisions were successfully raised in the wake of the plan's leaking, contributing to the eventual stagnation of the Xiaodongese front.

While Senria attempted to begin implementing some provisions of the Nakagawa Plan between 1933 and 1935 - most notably in its occupation of Jindao - Euclean opposition ultimately prevented the plan's large-scale implementation. Estmere, Werania, Narozalica, and Etruria ultimately pressured Senria into making a negotiated, rather than imposed, peace with Xiaodong and were involved to varying degrees in the drafting of the Treaty of Keisi, which formally ended the war between Senria and Xiaodong. While some of the provisions common to the Nakagawa, Isiyama, and Takamatu plans - such as the independence of Dakata and Chanwa, and the transfer of surviving Xiaodongese financial and military assets to Senria - were present in the Treaty of Keisi, it was largely viewed as a repudiation of the Nakagawa Plan, as it preserved the existence of a single Xiaodongese state and limited Senrian influence over the area. Nonetheless, Euclean powers continued to fear that Senria would attempt to impose the Nakagawa Plan; this, alongside the buildup to the Solarian War, contributed to Euclean nations allowing Xiaodong to unilaterally repudiate many of the Treaty of Keisi's provisions. All discussions of reviving the plan in post-war Senria, even on a reduced scale, were ultimately abandoned due to widespread war-weariness among the Senrian public.

In spite of the plan's failure, it remains widely popular in Senria, which some analysts regard as emblematic of the endurance of the concept of hakuzin souri; a 2017 poll found that nearly two thirds of Senrians polled held a positive view of the plan, and that roughly half believed the plan would have worked if not for Euclean interference. The plan is viewed particularly positively in nationalist and ultranationalist circles, including by some figures in the Aikokutou and Reimeisa political parties. Conversely, it has continually been invoked by Xiaodongese politicians as proof of a continual Senrian conspiracy against Xiaodong and that normalising ties with Senria will lead to Xiaodong to eventually become a "Nakagawa state".

In 1932, as the tide of the Great War in Coius turned in favor of the Allied Powers, discussion emerged in Senria with regards to how far the war was to be prosecuted and what terms Senria would seek in a hypothetical peace treaty with Xiaodong and the Entente. For the first four years of the war Senria had largely been focused upon ensuring its survival as an independent state; with Xiaodongese forces now being pushed back, however, Senria's government - under the leadership of Katurou Imahara - now had to contemplate what it would do if it won the war.

As Xiaodong had initiated the war with its invasion of Senria in February 1927, sought the partition of Senria, and perpetrated an active campaign of genocide within Senria, the overwhelming majority of Senrian military and political leaders agreed that the war ought to be prosecuted until Xiaodong offered its unconditional surrender, and that the peace deal imposed upon Xiaodong ought to be made as harsh as possible, both as retaliation for the damages and atrocities performed by Xiaodongese forces during the war and as a means to prevent Xiaodongese reconstruction or rearmament. Nonetheless, there was initially little clear idea, beyond a desire for retaliation, as to what specifically Senria would seek in terms of reparations and territorial changes.

The first major proposal came from Isao Isiyama, leader of the Kyouwakai and a minister without portfolio within the Government of National Preservation, in May 1932. The plan called for the partition of Xiaodong into three smaller states, which would be disarmed and barred from reunifying, and the transfer of Xiaodongese financial, military, and industrial assets, as well as the territories of Jindao and the Sunahamas, to Senria. It also called for the independence of the Gaullican colony of Sangte and the Xiaodongese vassal of Tinza, as well as the creation of independent republican states for the Ba, Dakatan, Chanwan, Shao, and Weishangese peoples. These newly-independent states would be within the Senrian sphere of influence, forming a cordon sanitaire around the three Xiaodongese states should they somehow reunify. Estmere and Etruria would retain their colonial concessions in Baishadao and Gaoming respectively; additionally, Estmere would concede the Far Isotamas and Tava in exchange for control over Nanqing. Isiyama described his plan as pragmatic, writing in a letter to Katurou Imahara that:

...while the Euclean allies have been useful in prosecuting the war effort, you know as well as I that they will always consider us as lessers, rather than as equals. Therefore, while the continued presence of Euclean colonial outposts in southern Coius is indisputably undesirable, it is a concession we will have to make if we are to convince the Eucleans to give us the territorial, economic, and military concessions we need in order to render Xiaodong incapable of future aggression.

Imahara disagreed with this assessment, however, writing to Isiyama that "the Eucleans will force concessions upon us no matter what we propose; therefore we will only compromise, when needed, at the negotiating table, and not beforehand". Imahara also believed that Isiyama's partition of Xiaodong into three states, all of which would retain Xiaodongese identities, was not sufficient to prevent Xiaodongese reunification.

Imahara received a second major proposal from Kasayosi Takamatu, a close personal friend and director of the Tokkeitai, in August or September 1932. Takamatu's plan was substantially more ambitious and more stringent. Like Isiyama's plan, it called for the independence of Baekjeong, Dakata, a Shao Republic, Weishang, Chanwa, and Tinza; however, Takamatu's plan called for a large area of Xiaodong, including Jindao and Isiyama's proposed Ba Republic, to be turned into "New Territories of the Senrian Republic". This area (commonly referred to as Sinryoudou, from the Senrian term for "new territory") was to be aggressively Senrianized, largely through the ethnic cleansing of local populations and their replacement with Senrians, and eventually annexed into Senria. The remainder of Xiaodong would be divided into ten smaller states, which would be reduced to "semi-feudalism" and left to feud among themselves, which Takamatu believed would prevent any one from being able to challenge Senria. The only territories to remain under Euclean control in Takamatu's plan were Tava, which would remain Estmerish, and the Sunahamas, which would be transferred from Gaullica to Estmere. 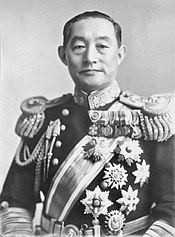 Admiral Iturou Nakagawa, who proposed the plan, was a close friend and ally of Katurou Imahara.

Takamatu's plan was controversial, however. Many believed his plans for Sinryoudo to be overly ambitious; Defense Minister Sintarou Miyake, during a cabinet meeting, asked Takamatu "where [he] intend[ed] to find the several million Senrians we will need to populate such a territory", while commander of the Second Army Group Nobuyuki Youiti noted that Sinryoudou was as large or larger than Senria itself. Others objected to Takamatu's proposal to leave the smaller Xiaodongese states to fight amongst themselves; Chief of Staff Soukaku Sioda told Imahara that "your friend Takamatu has created the perfect recipe for some warlord to create an army, train it through the conquest of the nine other states, and then turn this battle-hardened force against us", while Isiyama described Takamatu's proposal as "one which will create perpetual instability, and therefore potential for war, in southern Coius". Imahara concurred with these criticisms, and ultimately dismissed the Takamatu plan as unfeasible and overly ambitious.

Various alterations were proposed to the Isiyama and Takamatu plans by leading military and political figures in subsequent months, but no general consensus was reached as the alterations in question were comparatively minor, often involving only slight changes in borders or in the figures of reparation payments. As a result of this, another close friend and political ally of Imahara, Minister of Rites Iturou Nakagawa, proposed his own partition plan for Xiaodong in February 1933, deliberately styling his plan as a "middle path" between the Isiyama and Takamatu plans.

The main provisions of the Nakagawa plan can be summarized as follows:

[the bits that nakagawa borrows from isiyama and takamatu help convince people to back his plan, as incorporating the best parts; at the time it's viewed as ambitious but not overly so; and the proposal regarding the "innately hostile territories" picks up steam as the best way to permanently end xiaodongese aggression]

[as it builds up consensus it gets imahara's favor, and that functionally seals the deal]

Leaking of the plan