Noordenstaat, officially the Kingdom of Noordenstaat (Dutch: Koninkrijk van Noordenstaat), is a sovereign state in Lorecia, in central Astyria. It shares land borders with the Aurora Confederacy and Fyngaria in the north, and Haguenau in the south and borders the Noordenstaat Sea to the west. The most significant cities are Koninstad, which is also the capital city, Schellerdam, the most populous city in the country, and Bruningen, seat of the Noordenstaat economy and industry. Noordenstaat is constitutional, parliamentary monarchy with unicameral legislature since its separation from the Nikolian Empire in 1946.

Around 5th century BC, Ethlorek peoples migrated from the area around the Tanz river in modern day Aquitayne and moved west, thus establishing settlements as they passed through western Lorecia. Several archaeological investigations of the area suggest that the Ethlorekoz founded several settlements along the Woon, Witstroom and Dijk rivers, and on the coast of the Putin Strait close to the modern-day cities of Drichtweenslot and Emmen, from where they crossed into Nikolia and migrated further south.

Noordenstaat is mostly flat with mountains dominating southeastern provinces Rode, Schwarzenberg and Weiland. Towards the central part of the country, provinces consist chiefly of hills traversed by the rivers. Most notable rivers are Woon, Drijk and Witstroom. The flatlands of Noordenstaat are mostly covered in grass fields, crop fields and forests of oak, beech and poplar. The agriculture is concentrated in a vast plain covering the provinces Vlaksland, Maartinenland, Zuidstroom and Hoofdstad.

The coast of Noordenstaat is nearly entirely discordant beach, with many marine terraces, bays and headlands. The cliffed coast is typical for the coasts of Braamenland and Noord Schiereiland provinces.

There are 18 islands larger than 5 square kilometers. The largest and the most populous island is Bergeiland.

Noordenstaat is a constitutional parliamentary monarchy ruled by Queen Anne Charlotte II. The government of Noordenstaat is consisted of the Council of Ministers, as an executive body and the States-General, a bicameral legislative body of the government. The current Prime minister is Rudolf Schoorl.

Members of the Royal Noordenstaat Army during military practice

Noordenstaat has a medium size military divided in four branches:

As of 2018 the Armed Forces of Noordenstaat consists of 266,700 personnel and 129,773 personnel in reserve. There is mandatory conscription for all males from the age of 18 that lasts for 6 months. Females can volunteer for military service but are not conscripted otherwise. After compulsory military service, the certain percentage of soldiers that showed excellence during their service are offered to become active soldiers, while others are considered available for military service.

The Armed Forces of Noordenstaat are part of the joint Lorecian Community defence force.

Noordenstaat is one of the leading economies of Lorecia. It is founding nation of the Lorecian Community and hosts its headquarters. Bruningen Beurs is one of the oldest stock exchange in the region and it has been one of the most important stock markets in Lorecia. Noordenstaat's economy is stable and sustained with only 23% of goods being imported, those being raw materials, not commonly found in Noordenstaat. Since the 16th century, shipping, fishing, agriculture, trade, and banking have been leading sectors of the Noordenstaat economy. As of 2010, key Noordenstaat's trade partners were members of the Lorecian Community, Nikolia, Haguenau and ViZion. Noordenstaat's currency is guilder and its exchange rate to USD is 7.5 guilder.

Manufacture form the largest industrial sector. Other major industries include foodstuffs, chemicals, metallurgy, machinery, electrical goods, and tourism. There are multiple foreign companies doing business in Noordenstaat, many of them having production lines, thanks to easier trade to nations from where raw materials come. 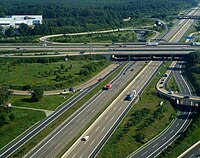 Noordenstaat has well developed road infrastructure with 15 motorways with total length of 8,421km connecting all major cities in the country. Motorways have tolls imposed in a form of vignette (Snelwegvignet). Domestic vehicles gain Snelwegvignet through annual vehicle tax, while foreign vehicles may purchase a vignette sticker for various periods of time.

Woonekrun dam. One of the largest dams in the world

In 2013 population census, Noordenstaat had 127,224,534 inhabitants. Majority were Noordeners (90%) while the remaining minority population included Fyngarians, Haguenauvians and Aurorans. The most populous city in the nation is Bruningen, with 8,234,765 citizens.

The Noordenstaat's population is mostly grouped in coastal areas around major ports. Other major cities (together with the capital) are located inland, mainly on large rivers. Thanks to the geography of Noordenstaat, there are not many geographic obstacles for human settlements, hence the cities are almost evenly distributed.

Historically, Noordenstaat has been predominately Christian. Nowadays, the trend continued, and, since the 2016 population census, 75.3% of population was religious. Since the Protestant Reformation, Noordenstaater vastly switched to Protestantism, claiming a majority in Noordenstaat's religious population. 24.7% found themselves as irreligious, which is mostly benefited by liberal policies of the government. Other religious groups include Orthodox Christians (2%) and Roman Catholics (10%)

Religion in Noordenstaat is considered as personal choice and that it should not be propagated in public. Although the majority of the population is religious, the government, apart from the Royal Family, is secular. The Royal Family members are Protestants, and in order to become a monarch, a person must be of Protestant religion. The coronation and similar events still performed in religious ways, as per the old customs and traditions.

Although the government officially does not support any religion, many Christian religious holidays are as well national (Christmas, Easter, Pentecost and the Ascension of Jesus). There are as well several political parties that openly practice Christian traditions, such as NCP, PPN and KPN.

Compulsory education in Noordenstaat starts at the age of 7, and lasts for 12 years (8 years primary school, 4 years high school).

Retrieved from "https://iiwiki.us/mediawiki/index.php?title=Noordenstaat&oldid=140485"
Categories:
Hidden categories:
This page was last edited on 15 December 2019, at 20:23.
Privacy policy
About IIWiki
Disclaimers