The Social Democrats of Paretia (Luzelese: Social Democratas da Paretia; Esmeiran: Social Demócratas de Paretia; Visegan: Social Demócratas de Paretia; Tosuton: Social Demòcrates de Paretia), or the SD is a center-left political party in Paretia. It was founded in 1976 by a merging of the Euclean Paretian Social Democratic Party and many other parties, and former moderate members of the Paretian Section of the Worker's Internationale and Labour Party of Paretia, and other left-wing parties. It was formed after the growth of the Conservative Union which had recently won the 1975 election in a massive landslide without the need of a coalition government to control the country. Since 2011 it has lead the opposition of the Paretian legislature and since 2017 against the center-to-right wing Compromise Coalition, despite holding the most seats in both houses.

The Party's first successes were in the 1980's when the urge to join the Euclean Community began to attract voters, they took advantage of this and promised to join the Euclean Community by the end of the century. This message and their policies on Healthcare, Promoting unions, and Infrastructure, would lead to their first victory in the election of 1990 where they had control of every part of the government, with Julío Pires as Premier. In the 1991 Paretian Referendum to join the EC, which their support would lead to joining the EC in a massive landslide vote. They would be able to successfully get Paretia to join the EC with by 1995 and implemented many of the policies the community promoted, they would be in control until 2003, and then returned to power for only three years from 2008-2011.

The Party has been the leader of the opposition since the losing to the Conservative Union's Vasco Gonçalves and their allies in the 2011 general election. Since the election the party has was lead by Esmeralda Falcão, who has been a leading figure in the party since the early 2000's. Her role as the leader has been difficult as they have not won power due to the coalition government, while fragile, has been able to exist for an entire decade. It is now lead by Talia Caselles.

In 2021 Premier Isilda Cerqueira would join the far-right populist Patron League and cause a snap election, the SD initially led polls until they had a few members implicated in the 2021 Trovão elections scandal, which saw the LP rise significantly in polls. Despite making gains in the election on August 4th, they did not have enough to defeat the LP, who allied with the Alt Party and created O Povo. The SD and other left-wing parties responded by creating Socialist Unity, an alliance to counter the O Povo government. 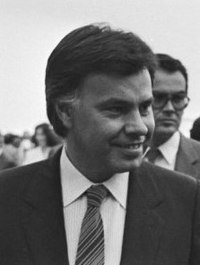 Julío Pires, founder of the Social Democrats, in 1981

In the 1970s, political turmoil grew in Paretia, a failed coup attempt against the unpopular Caetano Ribeira Da Vila saw ferver of political factions during the decade, the issue of joining the Euclean Community was becoming forefront as the Great Game was beginning to end. SD party founder Julío Pires was a member of the Euclean Paretian Social Democratic Party, a center-left political party that advocated joining the Euclean Community. During this time many political parties began to form, the main left-wing party at the time, the Paretian Labour Party, had split apart between pro-EC and anti-EC factions, and was losing popularity to the center and right. The new Conservative Union lead by Timoteo Cabral made would win election in 1975, the PTP lost most of it's voters to splinter parties who were discouraged by the refusal attempt to join the EC by Eugênio Dantas, as well as backtracking on labour policy during his tenure. Pires founded what was initially called the Social Democratic Unity Party in 1976. Pires and his allies seized the opportunity to take control of the now disunified left-wing, and the SD would win 9% of the vote in 1978, though still in opposition, it allied with other left-wing parties and eventually Pires would convince them to join the Social Democratic Unity Party soon after, renaming the party to the Social Democrats of Paretia. 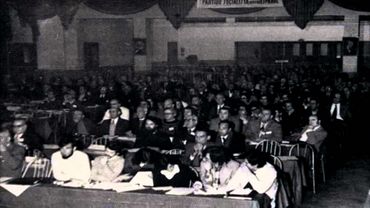 During Cabral's term the Social Democrats lead the left-wing portion of the opposition, alongside the Liberal-Centrist parties as well. In 1980 Pires decided to give up his leadership to his deputy Suzana Coutinho, his reason for doing so was stated as "personal reasons", the party would meet with Social Democrats from various other Euclean nations and establish close ties with them, joining the EC became the center position of the party.

In the 1981 election the Liberals of Paretia lead by Manuela Morais would win the plurality of the votes, at 34%, the SD won 16% of the vote, and would decide to ally with the centrist government of Morais during her Premiership. The party was given some cabinet positions along with the three other parties that formed the center to center-left government. The government of Morais would lay down the framework for Paretia's acceptance into the Euclean Community, however the Conservative Union, now lead by Martí Solaries, would run on stopping Paretia from joining the community. The polling of the government collapsed during this time when economic issues began to arrise under the Morais government, Coutinho would give her leadership position to Lluc Delgada in 1983.

In the 1984 elections the Liberals of Paretia would lose many votes to the right and left, and despite the SD's participation in the government, they still gained seats in the election, winning 27% of the vote. Many left-wing voters from the SPIT and other parties began to rally around the Social Democrats at the time, eventually it started to become the sole left-wing party aside from the SPIT.

Julío Pires would return to his leadership rule in 1985, and would become increasingly popular as the government of Solaries began to lose popularity. In 1987 they would win 31% of the vote, and the UC government became a minority government, the popularity of joining the EC greatly increased in the late 80s, the Social Democrats began to run on a progressive platform, calling for social reforms such as ending the death penalty, universal healthcare, and labour condition regulations gave the party complete advantage in the upcoming election. Economic conditions from the Morais government did not change under Solaries, giving the party even more points against the UC. 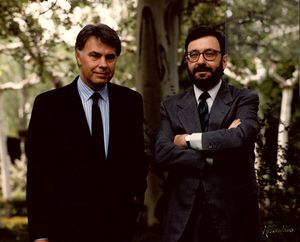 Pires and Delgada as Premier and Deputy Premier in 1993

In the 1990 election, Pires and the Social Democrats would win in a massive landslide, winning 66% of the vote, and controlling all regional legislatures, it was the largest percentage of the vote garnered by a single political party in Paretian election history. The Social Democrats could easily run the government on it's own without the help of other parties, and was easily able to begin enacting critical promises made to voters.

The first action under Pires was the banning of the death penalty, this was followed by several other social reforms that Pires stated was needed to be done in order to join the Euclean Community. He began a committee to join the EC and began to prepare to organize a referendum. In his next policies he began to enact regulations on fossil fuels as well as raising the minimum wage by 30%, alongside other labour-related policy issues. In early 1991 the Social Democrats would nationalize three of some of Paretia's largest banking companies on grounds that they were fraudulent to it's consumers and employees.

In 1991 the government held the EC membership referendum, the party began a campaign to advocate for the yes vote, the opposition was not able to attract enough support for a no vote. The Social Democrats were able to gain massive turnout in the election, which saw 74.5% voting yes to join the community. The government officially began to join the EC and in the 1993 election won 66% of the vote, gaining even more seats, and became the largest single party government in Paretian history. In 1995 Paretia officially became a member of the EC alongside Amathia.

In 1993 the party and Pires Premiership reached approval ratings as high as 75%, the highest of any Premier since the beginning of polling. During the 1994 election they would win 69% of the votes, the party would gain more votes than the previous one, winning the record largest number of seats of any party in Paretian history again.

The party is considered left-wing in nature and has much of it's ideology centered around democratic socialism, social democracy, and progressivism. But still the party encompasses a wide rage of ideals on the left side of the political spectrum. There are smaller portions of the party who lean more towards further left socialism and towards the center with liberalism. The party is seen as a unifying party that unites the left under one banner, as other left-wing parties are much smaller in comparison, unlike the right, which in Paretia is divided into groups. In the early years of the party, support for worker's unions were a major political standing point of the party. In the 21st century, modern progressivism has become a major part of the party's platform as it advocates for policies like LGBT rights, immigration reform, and police reform. The party differs in many ways from the more radical socialist SPIT, some reasons include that it is Pro-EC and its support for eastern democracy.