The 2021 Paretian general election was held on August 4 2021. It was the first snap election in over 50 years in Paretia. It took place less than a year after the 2020 Paretian general election. The election was called on June 15th by King Erasmo, after disagreement within the diverse government coalition lead by Isilda Cerqueira fell apart after she joined the far-right populist Patron League and called for a snap election. The Conservative Union and Together for Liberty both left the coaltion, leading to a hung parliament, which then dissolved.

Cerqueira would become the Party Chairperson of the Patron League and serve as leader alongside Selena Caprichoso, who became General Secretariat. The LP's rise to power using populist rhetoric was emboldened by blaming the failures of the last decade on the UC and others. The Social Democrats initially took the lead in polls, closely ahead of the LP. The "old parties" of the right, the UC, CpL, and LdP were seen as obsolete by many and saw a massive freefall of support, many began to consider the LP as the new leader of the Paretian right-wing. Other populist, or anti-establishment parties rose alongside the LP, including the populist Alternative Party, and the far-left Paretian Section of the Workers' International.

Further scandals including the 2021 Trovão Elections Scandal, in which the SD, CpL, and UC were implicated in working with election and judicial officials in attempting to remove the LP from the ballot, would cause further collapse of the old parties. The scandal also saw massive growth in LP support to put them into the lead ahead of the SD.

The election was held on August 4th, and the results showed the LP becoming the largest party in both houses of the Senado da Paretia, The SD would grow but not have enough to hold a majority, even with allying with other left-wing parties. The LP would then ally with the Alt Party, they would form an alliance called O Povo. The Social Democrats and other left-wing parties would form an opposition alliance known as Socialist Unity. The government was the first self-proclaimed far-right populist Paretian government since the functionalist government of Carlito Palmeira. Cerqueira would again be reinstated as Premier of Paretia, with the leaders of both ruling parties being made Deputy Premiers.

Campaigning officially began on the 22nd of June 2021. About a week after Cerqueira joined the Patron League and the call for snap election was accepted by King Erasmo.

The Patron League began rallying in Esmeira on the 22nd of June. The first rally was held in Vallenoche, there Premier Isilda Cerqueira gave a speech alongside Selena Caprichoso announcing the shift in the party's leadership positions. Their campaign focused heavily on populist rhetoric. A common target was the EC, which the party believes is "detrimental to Paretia's sovereignty" and was open to a referendum to leave the community. The campaign adopted multiple slogans, such as "Fight for the people!", "Paretia first!" or "Revolta!". The party commonly used various populist terms like "the bloodsuckers" or "the cronies" to describe the EC and Paretian elites. The party took a unique position on various issues to appeal to it's populist message, some positions of the party are considered left-wing, but inherently populist.

The Social Democrats held their first rally in Sidaloa, Luzela on the 22nd of June. The party commonly referred to numerous failures during the Vasco Gonçalves and Isilda Cerqueira governments. The party called for "change" and the bring the Pink Wave to Paretia. The party called for expanding Paretia's friendship with other EC nations. It also called for Paretia to further support the rights of minorities within the country, especially the LGBT community. The party called for a reformation of Paretia's policing and advocated for putting more strict rules into how policing is conducted to protect citizens from police brutality. The party used rhetoric of "unity" against "the dangerous far-right and the corrupt center".

Paretian far-right functionalists rallying in support of the Patron League

The election saw various controversies, the largest being the 2021 Trovão elections scandal, which on the 23rd of July, an anonymous source approached the Patron League and multiple news outlets revealing an attempt to ban the LP from the ballot in the districts overseen by the Trovão Elections Commission and the Trovão High Court. The source also said that multiple party members from different parties, including the SD, UC, and CpL were involved in working with Trovão authorities in trying to find a way to remove the LP from the ballot. Leadership from the parties denied any knowledge of the events, LP leaders announced that they will punish those involved. Selena Caprichoso said in response at a LP rally, "They know we are going take these districts in the snap election, we are polling in great numbers there. They're scared of us, our movement and a possible victory for Paretian democracy!" The scandal led to a surge in support for the LP within the final weeks of the election season. The LP used the scandal as evidence of the Paretian elites working together to subvert Paretian sovereignty.

The Patron League were no strangers to controversies. One of them being the party's use of conspiracy theories against the Euclean Community and older Paretian parties. Some of them include the idea of Great Replacement Theory, in which they believe the EC is trying to led Coian migrants into the country to replace the white population and therefore make it "more malleable by the elites".

Another controversy of the LP was the support they saw the Paretian functionalist far-right. Many of neo-functionalists in Paretia endorsed the LP and held rallies in support of the Party, many of which saw violence with anti-functionalist counter-protests. Many of the leaders of the far-right wish to return the country to the functionalist state that ruled during the Great War. Although LP leaders refused to accept the far-right's endorsements, many of them were allowed to rally with them in support and attend LP rallies. 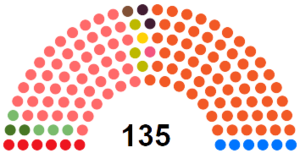 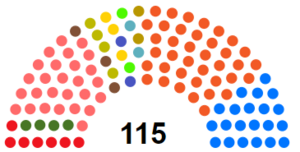 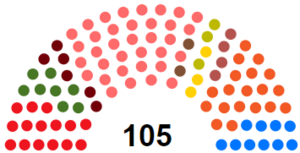 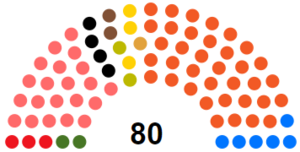