The Tall Grass (Ansene: 키큰풀; Kikeunpul) is a 2021 Ansene wartime action drama film directed by Chwa Chong-Hun. It stars Cheong Sook and Yi Chung-Hee as students during the Siege of Aehwa Temple during the Dakian War.

Director Chwa was able to recruit international Coian stars like the Senrian idol-turned-actor Ryouya Takemori and Arthasthani actor Jahnu to act in the film. The film was a critical and box office success, with over 10 million tickets sold for the opening week. The film premiered at the 82nd Montecara Film Festival.

The title of the film, "The Tall Grass" refers to the Ansene idiom, "The tallest grass is the first to be cut". This idiom refers to the tendency for those who shine the brightest to often die young. In the original sense of the phrase, it calls for people to remember to enjoy life and take time to relax, recover, and ponder. Director Chwa said the tall grass in the title referred to the brave students of Aehwa temple, who chose to embody national ideas of duty, honor, and faith at the cost of their young lives. Also considered is Major Deval, whose moral actions placed him at odds with his countrymen and ultimately cost him his life.

The film opens with view of the aftermath of the Battle of Inseul, on the second day of the Dakian War. Inseul, a former Ansene garrison in Gangsai on the Ajahadyan border, is strewn with corpses and ruined vehicles. As the camera pans out, the Ansene flag falls and victorious Ajahadyan soldiers raise their own. Major Deval(played by Jahnu), stares out at the carnage and shakes his head ruefully. Narration reveals that the Ajahdyan army overwhelmed the unprepared Ansene defenders in a surprise assault, attacking the country without a declaration of war. The scene shifts to a bedraggled stream of Ansene army survivors fleeing south. The narration states that all across the border with Ajahadya, Ansene garrisons were destroyed and sent into desperate flight. The path into Ansan was now open for the Ajahadyan hordes.

At the Aehwa Temple School in rural Gangsai, chaos reigns as younger students and older faculty are desperately evacuating. Baek-Hyun(played by Cheong Sook) and Man-Shik(played by Yi Chung-Hee) help an elderly monk load relics into a horse-drawn carriage. As they complete the task, the axle of the carriage breaks and the monk is forced to leave without the cargo. Baek-Hyun and Man-Shik promise to hide them before leaving the temple. The refugees from the temple leave, joining others from the nearby villages as they race south, attempting to keep ahead of the oncoming Ajahadyan army. The older students and younger staff are left behind in the temple, unsure of how to proceed. Several students want to also flee south, while Man-Shik and others want to stay and fight. In the end, 89 students and staff choose to stay at Aehwa.

Soon after the last refugees leave, a group of soldiers arrive, lead by Sergeant Sugimura(played by Ryouya Takemori). This small group of soldiers were all that was left of the Inseul Garrison. According to Sergeant Sugimura, the advance elements of the Ajahadyan army were only two days behind them. Nurse Jang-Mi(played by Lee Young-Ja) interrupts the Sergeant to say that the wounded in the group can't go any further and all of them need to rest. Baek-Hyun and Man-Shik show them to the temple infirmary. Sergeant Sugimura and Baek-Hyun talk about their plans going forward. If they leave tomorrow, it is highly likely that the unwounded would be able to keep ahead of the enemy. But the wounded would be abandoned to die. Neither seems to desire that outcome. Man-Shik and a monk interrupt the two, declaring that a cache of weapons from the Civil War had been found. Though the rifles were thirty years old, there was plenty of ammunition and most were in working order. With the addition of weapons, the decision is made to stay and try and hold the temple. The students start to train with the rifles, though many are poor shots.

In Vijayla City, General Lee Byeong-Ho(played by Bibo), organizes what's left of Ansene forces in a defensive line along the Dansa River. Vijayla City and the Dansa are the last barriers between the Ajahadyans and the heart of Ansan. If the Dansa is breached, the country will fall. All along the river, Ansene forces dig in and prepare fortifications. Refugees from Gangsai stream across the sole standing bridge in Vijayla City. Among them are refugees from Aehwa. The elderly monk begs a captain to send soldiers to Aehwa, saying that young students had chosen to stand their and fight. The captain refuses, saying that all soldiers are needed to hold the Dansa. Aehwa would stand alone.

In the Ajahadyan army, Major Deval chastises some soldiers for burning a village and raping the women who stayed behind. He is prevented from punishing the soldiers by his own commanding officer, who states that the Ansene deserve the atrocities for repressing the Bumites. Though Major Deval disagrees, he is unable countermand the order. He goes to talk with some surviving Ansene soldiers taken prisoner. Out of pity, he gives one young POW some of his rations, though after he leaves the POW is shot by the guards for having food.

The Ajahadyan army arrives at Aehwa. A skirmish breaks out between student sentries and Ajahadyan reconnaissance units. The students manage to push back the invaders, but with sustain several casualties. The main force of the Ajahadyans arrive and use artillery to barrage the walls of the temple, forcing the students deeper into the complex. After the barrage, the soldiers storm the temple complex. Sugimura and Baek-Hyun rally the faltering students to defend the temple interior, while Man-Shik and Jang-Mi desperately attempt to care for the increasing numbers of wounded students. After sustaining heavy casualties and being forced back to the temple infirmary, less than a dozen students are still able to fight. Jang-Mi distributes grenades and knives to the wounded and herself takes up arms and joins the defenders. After a brief, but intense, fight the students are killed to the last person.

As the Ajahadyans begin to loot the temple, Major Deval arrives. He walks past the now-destroyed complex and stops to stare at the piled up bodies of the students. Upon realizing how young the dead are, Major Deval vomits and runs into the woods. A lone gunshot is heard.

The film cuts to modern day, where the Aehwa Temple School and historical site has been restored and turned into a war monument. Text on screen reads that though the Ajahadyans won the Dakian War, the example of the Aehwa students inspired a new generation of Ansene to take up arms and fight for the motherland. Aehwa was liberated in the Third Satrian War. The film ends with a lingering shot of a monument featuring the 89 students and soldiers. 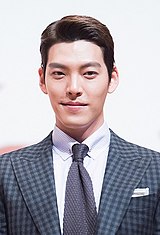 Retrieved from "https://iiwiki.us/mediawiki/index.php?title=The_Tall_Grass_(2021_Ansene_Film)&oldid=417076"
Category:
Hidden category:
This page was last edited on 25 October 2021, at 20:07.
Privacy policy
About IIWiki
Disclaimers