Kylaris, commonly known as earth, is a rocky planet in the Solaris star system. It completes an orbit around Solaris approximately every 365.2422 calendar days (rotations about its axis); from the perspective of the North Pole on the planet, like most other celestial bodies in the star system, it orbits counterclockwise. It is spherical with a slight bulge at the equator owing to its rotation, which is slightly tilted compared to its orbital axis with respect to the sun, and it has one planetoid moon. Its axis of rotation produced seasons, as it is titled in respect to the planet's orbital plane. The planet is notable for being the only known location to harbor, at any time, life. 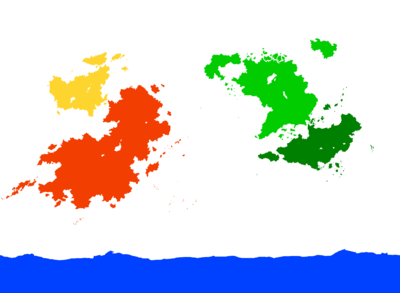 The Community of Nations headquarters in Kesselbourg.

The majority of Kylaris's surface is uninhabitable. Three-quarters is covered by oceans and other bodies of water. Of the quarter that is land, nearly half is uninhabitable desert, mountains, or ice caps. Only an estimated one-eighth of Kylaris's surface is considered habitable by humans. Suqquirut in George Ruset Land is the northernmost permanent settlement in the world. The southernmost is the South Pole Station located at the South Pole on the continent of Glacia.

Independent sovereign nations are the basic organisational unit of the human species, which resides on and is predominant on the planet. Their distribution has a strong relationship to the planet's geological and biospheric characteristics and geography more generally. These states claim the planet's entire surface area. As of 2019, there are 97 sovereign states that are members of the Community of Nations and 16 dependent territories. There has never been a single sovereign government with jurisdiction over the entire planet.

Over 350 humans have visited outer space, reaching orbit. The first was Person Mac Person in 19XX. Fifteen people have walked on the Moon. Humans have yet to walk on any other planet in the Solaris system. The only regular human presence in space is on the International Orbital Station.