The Third Senvarian Insurgency was a civil military conflict which raged in Creeperopolis between the government and the Senvarian Liberation Front and Militarist Front for National Liberation. The war raged since October 5, 1934 and occured at the same time as the Mara War and Castillianan Insurgency.

The fully-fledged civil conflict lasted over 85 years and has been marked by war crimes, massacres, human rights violations, and crimes against humanity on both sides.[citation needed] It is unclear which side commits the majority of these crimes. The war was the deadliest ongoing global conflict and was the third of a series of Senvarian insurgencies.

On September 29, 2019, a Terraconserva Council of Nations Security Council resolution was submitted by Malgax to sanction Creeperopolis due to the ongoing conflict. It was vetoed by Quebecshire[1].

Creeperopolis has historically been characterized by marked socioeconomic inequality, especially since industrialization. In the late 19th century, coffee became a major cash crop for Creeperopolis, bringing in about 95% of the country's income. However, this income was restricted to only 5% of the population, exacerbating a divide between a small but powerful land owning elite, the government, and an impoverished majority. This divide grew through the 1900s and 1910s due to the establishment of the National Coffee and Sugar Corporation (CORNACA), a coffee and sugar monopoly. Creeperopolis was so heavily reliant on coffee to keep its economy stable that a Quebecshirite economist, Gérôme Ballouhey, referred to Creeperopolis as a "coffee republic."[citation needed]

Corruption in the Creeperian government played a major role in the reason poverty in Creeperopolis skyrocketed during the early 1900's and on why the economy was so weak and unstable.

Emperor Adolfo IV fell ill to Creeperian Malaria in December 1932. Emperor Adolfo IV died on January 2, 1933 at 9:02am San Salvador Standard Time (SST). The news was given to both his sons, Romero and Miguel. Both soon declared themselves the next rightful Emperor of Creepeorpolis.

The shots began the Creeperian Civil War, the deadliest war in Creeperian history.

Senvarians and Senvekians, after decades of Creeperian oppression, and after the Miguelists offered them an independent state if they fight and aid them against the Romerists, rose up against the Creeperian government on October 5, 1934, beginning the Third Senvarian Insurgency. The date falls on the 56th anniversary of the beginning of the Second Senvarian Insurgency in 1878.

Rise of the SLF

On October 5, 1934, Adam Schuessler I, a descendant of the Kings of Senvar-Senvek, the great great grandson of King William III, declared the establishment of the Republic of Senvar-Senvek. With his supporters, the Senvarian Liberation Front was founded to fight for and to maintain the sovereignty of the republic.

The SLF took part in the Papal War.

In 1940, the Militarist Nationalist Front (FRENAMI) was established by Creeperian generals and soldiers. The group, nicknamed Sombra Negra, was a death squad which hunted down communists (Miguelists) and Senvarians (SLF forces). FRENAMI slowed down the SLF's advances as their members were being killed by FRENAMI vigilantes.

End of the Civil War

In 1949, the Miguelists surrendered to the Romerists, ending the Creeperian Civil War. The SLF, however, refused to surrender and continued a guerrilla insurgent war in southern Creeperopolis. FRENAMI also did not dissolve and continued to fight the SLF.

Rise of MS and the FMLN 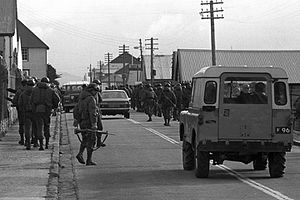 On October 15, 1979, Emperor Adolfo V declared war on the gang Mara Salvatrucha (MS) beginning the Mara War. MS allied itself with the SLF as Creeperopolis was seen as a common enemy.

On October 10, 1980, Farabundo Martí Rodríguez led a rebellion in death squad-controlled territory. He established the Militarist Front for National Liberation (FMLN) and allied with the SLF and MS to resist the Creeperian government, beginning the Castillianan Insurgency

Under Alfonso VI's October 16 Regime began to launch organized assassinations and murders of SLF, FMLN, and MS members, leading to an explosion in murder rates and violence.

Since the fall of the October 16 Regime, Alexander II has continued the war against the SLF, FMLN, and MS.

In August 2019, the SLF carried out the 2019 San Salvador Attacks which led to Alexander II declaring martial law. Murder rates exploded as a consequence.

Main article: Terraconserva Council of Nations § Condemnation of Creeperopolis and the Suggestion of Sanctions

On September 29, 2019 the Security Council of the TCN convened in Bostonia[2] to discuss the proposed Condemnation of Creeperopolis and the Suggestion of Sanctions[3].

During the session, the vote had become one in favor, four in opposition, and two abstaining before Quebecshire exercised veto authority[4]. Several votes have been lodged since, but as it stands the resolution will be discarded following the session's conclusion.

Both sides of the conflict have committed war crimes.