Uoverskuelig (stylised as uoverskuelig) is a 2022 crime comedy film written and directed by Scovernois director Birger Gram in his feature film debut. The plot follows the inhabitants of a tiny fishing village in eastern Scovern as a drug smuggling plot gradually unravels in the town and encapsulates its residents.

A stately and well-presented Rimsonian gangster (Mathias Fett) and his socialite wife (Jenny Rike), plan to use the small port of the village to smuggle drugs into various cities across the east coast. Through a friend in the village, the two dock there on a yacht, before a local elderly eavesdropper (Adam Zavragin) overhears their plans, demanding his involvement in exchange for his silence. Through gradual slip-ups, most of the village becomes involved in the plan, causing a great deal of stress and anger to the gangster, before the plan eventually blows up in a police raid.

The film is scheduled to premiere at the 83rd Montecara Film Festival, with a worldwide release scheduled for December 1, 2022. It has garnered praise for its comedic nature and its ironic portrayal of rural Scovernois society in stark contrast to the sleek and urbanite nature of Rimso and other large cities. The film also has underlying themes of economic dilapidation and governmental neglect of rural parts of the country. Gram was also the recipient of controversies regarding his portrayal of the urban upper class.

Frans, a gangster from Rimso, and his wife Gitte plan to use a picturesque but unnamed village on Scovern's east coast to smuggle a large quantity of drugs into the country through Frans' friend, Arthur, who lives in the village. At Frans' insistence, the two take their privately-owned yacht to the village, attracting the attention of many of the villagers, who are presented in a grizzled and old-fashioned manner. An elderly man, Gregers, questions their presence in the village, and before long figures out their plan to smuggle drugs into the village. Frans is forced to pay a hefty sum to Gregers in exchange for his silence, though the latter immediately returns home to tell his wife.

Frans and Gitte gradually run into more and more problems, and are forced to also pay off Kasper, a local fisherman whose curiosity causes him to inspect their yacht during the night, uncovering parts of their plan, and Mogens, the pastor at the local Catholic church, who becomes an integral part of their plan. Arthur becomes distanced to Frans after conflicting on the latter's involvement of many of the villagers.

Suffering from growing anxiety over the plans, and at great risk of having to spend more than the plan is worth, Frans gradually tries to retreat from the village, including a desperate attempt to run into the wilderness before he is intercepted by Gregers sitting on a boulder in a field. Gregers, who reveals he has only months left to live, forces Frans to remain in the village and see out the rest of the plan for his own enjoyment and exhilaration. A dejected Frans reluctantly trawls back to the village.

The morning after, Kasper cries out that his son has gone missing, and orders Frans to assist in finding him in exchange for his further silence. Their meeting is interrupted by a feud outside, and upon investigation it is found that Gregers is holding a rusty axe to Mogens' neck and shouting excerpts of the Poetic Edda to the crowd that has gathered. Gregers, clearly suffering from severe insanity and delusion, permits Mogens to escape after Frans attempts to intervene, but severely injures Frans and kills himself in the process, remarking that he is making his escape to Valhalla.

Arthur and Mogens go missing during the night, and the next day the village is awoken in a large police raid, where everyone is arrested. The screen pans out to show the village in chaos within the barren landscape that surrounds it. 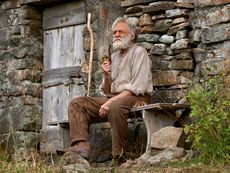 Adam Zavragin has received acclaim for his portrayal of Gregers, an elderly insane pagan convert.

The soundtrack for Uoverskuelig was provided by Estmerish musician Rickie Downer, a big fan and financial supporter of the film stemming from his own personal enjoyment. Despite this, the official film score is fairly small, with only six tracks, and most of the film's music design is newly-produced ambient tracks that play throughout the film.

The included Downer tracks consist primarily of ambient releases present on the latter half of his albums from the late 1970s.

The film was produced and distributed by independent Scovernois company Films4wd, who also collaborated on producing Full Moon Rising.

Gram received controversy for his portrayal of Frans and Gitte in the story, who are portrayed as wildly out-of-touch, eccentric and rude in comparison to the people of the village. Writing for Dagbladet Forretning, journalist Tom Hansen says, "It is almost laughable the lengths he [Gram] goes to reaffirm the dated notion of some large national divide, one can't help but make the comparison to other forms of prejudice and discrimination".

Film critic Ragna Myking, writing for N.o.A., also affirms, "Though the cinematography and acting is astounding, Uoverskuelig sadly falls short by a childish and immature basis for a story that goes above and beyond in its absurdity."

Many have also interpreted the main plot of the film to be Gram's artistic approach to denouncing the Scovernois government's drug policy, which has become notably liberal in recent years. Gram has spoken out against drug use before, in 2012 calling it "Scovern's worst epidemic in its history" after losing his mother to a drug addiction.

It is unspecified in the story as to what drug is trying to be smuggled, which some have said leaves the story open to interpretation. Some of also speculated that the manner in which Frans conducts the plan – which is markedly open and obtuse – may also be alluding to the country's drug policy.