The Aurean Forum for Peace and Cooperation is an intergovernmental organization of countries located near the Aurean Straits, in both Coius and Euclea, headquartered in the city-state of Montecara which lies between the Straits. The organisation was founded following the Solarian War to protect and govern the Straits, the entrance to the Solarian Sea and the Southern Euclean and Northern Coian coasts. The current Secretary General is Crabieli Melis of Emessa.

The Aurean Forum is governed by three main organs: the Secretariat, the Permanent Council, and the General Forum. 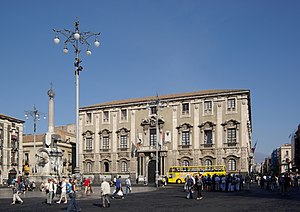 The Secretariat is divided into the following directorates, each of which is responsible for a major objective area of the organization:

Retrieved from "https://iiwiki.us/mediawiki/index.php?title=Aurean_Forum&oldid=274055"
Categories:
Hidden categories:
This page was last edited on 11 November 2020, at 01:03.
Privacy policy
About IIWiki
Disclaimers