The Community of Nations (CN) is an intergovernmental organization with the primary mission of maintaining international peace and security. The world's largest and most recognized international organization, the CN's mission also includes encouraging the development of friendly relations between states; harmonization of state action; protection of human rights; maintenance of international law; promotion of sustainable economic, social, scientific, and cultural development; organizing and delivering humanitarian aid; and safeguarding the environment. Its headquarters in Kesselbourg City are legally regarded as international territory.

The Community of Nations was established in the wake of the Great War by the leading members of the Grand Alliance with the aim of preventing future global conflicts. The CN Charter, signed on April 12, 1935, came into force in September of the same year. Membership is open to all sovereign states which agree to uphold the provisions of the CN Charter; the CN's membership currently constitutes all of the world's widely-recognized sovereign states. The organization is financed by voluntary contributions from its members.

The efficacy of CN efforts to fulfill its mandate of maintaining international peace have been complicated by international politicking by the world's major powers. Most operations have consisted of military observers limited to monitoring, reporting, and peacekeeping roles. In the past half-century, far more of the CN's budget has been spent on the organization's numerous development programs than on its peacekeeping efforts.

The CN has seven principal organs. These organs are the International Assembly, the organization's deliberative assembly; the General Secretariat, its primary administrative body; the Security Council, which handles matters of international security; the Economic Council, which handles economic issues; the Social Council, which handles social, cultural, and environmental issues; the Trusteeship Council, which oversees CN trust territories; and the International Court of Arbitration and Justice, which acts as the organization's judiciary. These organs, individually or collectively, oversee several subsidiary agencies, entities, funds, and programs, collectively known as the CN System. Additionally, the CN works closely with and can grant observer status to non-governmental organizations. The Secretary-General is the CN's chief administrative officer; this position is currently held by Ekaterine Beruchashvili of Vedmed.

Assessments of the efficacy of the CN have been mixed. Many have praised the Community of Nations as a venue for diplomacy and arbitration, a worldwide force for human development and human rights, and a successful attempt to stabilize a multipolar international system; however, it has also been sharply criticized as ineffective, bureaucratic, undemocratic, and corrupt.

The Community of Nations has seven principal organs: the International Assembly, General Secretariat, Security Council, Economic Council, Social Council, Trusteeship Council, and the International Court of Arbitration and Justice. Underneath these seven primary organs are a variety of committees, commissions, programs, funds, agencies, research institutions, and other entities, which carry out various tasks on the CN's behalf.

All of these primary organs are headquartered in Kesselbourg City, Kesselbourg, with the exception of the International Court of Arbitration and Justice, which is based in s'Holle, Hennehouwe. Furthermore, certain major agencies are based at other CN main offices in [locations to be determined]. The official languages of the CN are Esmeiran, Estmerish, Gaullican, Kirenian, Rahelian, Senrian, Soravian, and Weranian; its primary working language is Gaullican. Vespasian was originally established as an official language, but lost this status after the Solarian War. The headquarters of the Community of Nations are regarded as international territory and the CN and its agencies are, under international law, immune from the laws of the countries in which they are based and operate as a means of safeguarding the CN's impartiality in international affairs.

The International Assembly is the deliberative assembly, and main policymaking and representative organ, of the Community of Nations. It is responsible for the CN's budget, appointing the Secretary-General of the Community of Nations and the non-permanent members of other primary CN organs, receiving reports from other parts of the CN system, and making policy recommendations by passing resolutions.

The International Assembly consists of one delegate from every CN member state, and is led by a president elected annually from among the organization's member states on a rotating basis. International Assembly resolutions are not binding except where they concern certain procedural matters, such as admitting new members, appointing members to councils and committees, and approving the CN budget. Non-binding decisions are made by majority vote, with a quorum consisting of a majority of delegates and each country receiving one vote; binding decisions, however, must be approved by two-thirds of attending delegates. Draft resolutions may be forwarded to the International Assembly by any of its subsidiary committees. The International Assembly is empowered to make recommendations on any matter within the scope of the Community of Nations, except upon matters of peace and security concurrently under consideration by the Security Council.

The International Assembly has several subsidiary organs. These include the CNIA's standing committees, the Commission for International Law and Commission for the CN Civil Service, CN programs and funds, CN research and training institutes, and various boards and working groups.

Ekaterine Beruchashvili is the incumbent Secretary-General.

Furthermore, the International Assembly also oversees the operation of the CN's five research & training institutes: the Institute for Security & Disarmament Studies, Institute for Public Policy Training, Institute for Criminal Justice, CN Staff College, and University of the Community of Nations.

The General Secretariat is the primary administrative organ of the Community of Nations and functions as the organization's executive branch. The General Secretariat has a wide purview and performs a variety of roles; it provides information and analysis for other CN bodies, organizes CN conferences, implements and enforces the decisions of the CN's other major organs, manages and directs peacekeeping missions, and communicates both with states and with non-state actors such as other intergovernmental organizations and the media.

Distribution of seats in the Security Council by regional group:

The Security Council is charged with preserving and protecting international peace and security. Where other CN organs can only issue recommendations to CN member states, the Security Council has the ability to issue resolutions that are binding upon all member states. The powers of the CNSC include investigating and issuing recommendations on international disputes it thinks could threaten international peace, enacting economic or diplomatic sanctions against nations which violate the CN charter, and authorizing peacekeeping missions or outright military action to restore international security.

The CNSC currently has thirteen member states. Of these, six are permanent members representing the leading members of the Grand Alliance (excluding Etruria, which lost its permanent seat due to its incitement of the Solarian War) and the world's great powers, while the remaining seven are non-permanent. Each of the non-permanent seats is associated with a particular regional group within the CN and is held by a member state, elected by the International Assembly, for a three-year term. Terms are staggered so that three or four non-permanent members are replaced at every election, and countries are not eligible to be re-elected to consecutive terms.

The Economic Council is concerned with international economic issues and holds oversight over the CN's regional economic commissions, twelve of the CN's specialized agencies, and the CN Committee on Geographical and Geospatial Information. Like the Social Council, it has 20 total seats, with six held permanently by Estmere, Kirenia, Marchenia, Senria, Soravia, and Werania, and the remaining fourteen seats consisting of two seats for each CN regional group, with member states elected to these non-permanent seats for a three-year term.

The twelve specialized agencies under the supervision of the Economic Council are:

The Social Council is concerned with social, cultural, religious, humanitarian, and environmental matters, and holds oversight over nine of the CN's specialized agencies and a variety of smaller bodies with specific purviews known as "functional commissions". Like the Economic Council, it has 20 total seats, with six held permanently by Estmere, Kirenia, Marchenia, Senria, Soravia, and Werania, and the remaining fourteen seats consisting of two seats for each CN regional group, with member states elected to these non-permanent seats for a three-year term.

The nine specialized agencies under the supervision of the Social Council are:

The Trusteeship Council exists to supervise Community of Nations trust territories, places whose governance is legally entrusted by the CN to an administering power. Historically, these were often colonial possessions that were placed under CN trusteeship as part of a decolonization process in order to stabilize and prepare them for eventual independence. The only territory currently managed by the Trusteeship Council is the continent of Glacia, administered through the International Condominium of Glacia, all other trust territories having attained self-governance or independence. The International Condominium of Glacia is unusual compared to other trust territories as it is permanent, not intended to build an independent state, and not under the trust of a single administering state. 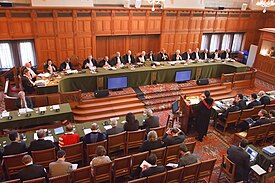 The Grand Hall of the Palace of Justice, the seat of the ICAJ.

International Court of Arbitration and Justice

The International Court of Arbitration and Justice is the judicial organ of the Community of Nations. It is the only primary CN organ not headquartered in Kesselbourg and the only CN organ not originally established by the CN Charter; the ICAJ was originally formed as the International Court of Arbitration, a voluntary arbitration body rather than a true court, by the 1898 s'Holle Convention, and was subsequently transformed into a proper international court and integrated into the CN system by the CN Charter. The court is based in s'Holle, Hennehouwe.

The primary purpose of the ICAJ is to hear and resolve disputes between states in accordance with international law and to issue advisory opinions on international legal issues; these rulings and opinions serve in turn as a primary source of international law. All CN member states may bring cases before the ICAJ; however, only CN bodies can submit advisory proceedings. The court is composed of a panel of fifteen judges, elected by the International Assembly for nine-year terms; these elections are staggered so that five seats are elected every three years to ensure continuity within the court. Every sitting judge must be from a different nation; additionally, there is a common informal understanding that the judges should be distributed so as to represent a variety of legal systems within the court.

From its earliest days, the CN has been criticized on a number of grounds. One perennial point of contention is its voluntary funding system, where member states are under no formal obligation to fund the ongoing work of the organization. This often results in serious budget shortfalls that lead to incomplete or cancelled programs, which particularly affects the poorest states which rely on the CN to provide basic humanitarian and security services. For the 2019–2020 budget period the CN had a €120 million operating deficit, the worst in nearly a decade, and the Secretary-General was forced to furlough staff and defer maintenance on buildings at headquarters.[1] Reform proposals have been floated dozens of times to move to a mandatory assessment system that would stabilize the budget, but so far the Security Council (which has a veto on matters affecting the Charter) has not allowed any proposed budget amendment to advance.

The nature and organization of the Security Council have also been roundly criticized by states that feel the SC is an undemocratic and moribund institution. Telchìde Gliò, Permanent Representative of Montecara to the CN, has stated that the Security Council's permanent membership "effectively freezes the power balance of international relations at an arbitrary point in the past" and that the lack of reform "absolutely guarantees that the council will gradually become less and less representative of reality and therefore less respected when it is needed most."[2] Reform proposals have included the abolition of permanent seats, the expansion of permanent seats to 10, 15, or 20 members, the expansion of non-permanent seats, and even the total abolition of the council, with its duties taken up by the International Assembly. So far, no reform has been able to pass the council itself.

Retrieved from "https://iiwiki.us/mediawiki/index.php?title=Community_of_Nations&oldid=412176"
Categories:
Hidden categories:
This page was last edited on 12 October 2021, at 13:20.
Privacy policy
About IIWiki
Disclaimers