Carlito Palmeira (September 11, 1898 - XX XX, 1935), was a Paretian politician and leader of the functionalist New Nation of Paretia Party. He served as Premier of Functionalist Paretia from 1925 to 1935. He was appointed Premier after he, Paretian military command, and Paretian monarch Roberta II staged a coup to overthrow democratically elected Xulio Sousa in 1925. He was leader of Paretia throughout the Great War alongside the Entente faction. In 1935, when nearly all of Paretia was taken by Grand Alliance forces, he was arrested and killed.

Carlito Palmeira as a young boy scout in 1915 (far-left).

Carlito was born on September 11, 1898 in Felipeio, Luzela, to a middle class family. His father, Henrique, was a lawyer who worked most of the time while his mother, Izabela, stayed at home. He was the oldest of his siblings. Carlito went to a local catholic school and in 1916 went on to study political philosophy at the University of Precea, here he studied the philosophies of various ideologies, including socialism, nationalism, and syndicalism. Here he became an early leader in the right-wing groups at the school, and eventually lead his own political actions organization that helped with right-wing campaigns, known as the Students for the Nation.

During his time at the university he also wrote many papers on his political ideas, many of which would be considered early layout of the ideology of New Nationalism that his future political party would be based upon. He would also take trips to various countries, including Soravia, Werania, and Amathia. In 1918 he took notice of the Parti Populaire in Gaullica, and wrote that he was supportive of Rafael Duclerque and their ideals.

After his time in college he began to work on creating his own political party, alongside many of his friends, and came to fruition as the New Nation of Paretia Party in 1919.

As the leader of the PNNP he began to make public speeches beginning in 1919, much of his speeches criticized the Paretian government and their handling of the Great Collapse, Kirenian Revolution, and many other pressing issues of the times. Many people would become supportive of him and saw him as a new voice, his party saw it's first victories in 1919 elections, and would see Palmeira gain a seat in the Câmara da Assembleia, but they did not win any seats in the lower house, making Palmeira the sole member of the PNNP in the Senado da Paretia. 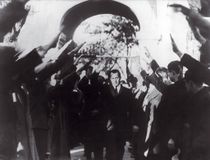 Carlito Palmeira with supporters in Precea, 1921

After the Parti Populaire took over in Gaullica, he would very be supportive of the new Functionalist government of Duclerque. He stated in 1920 that he believed that the right-wing was growing all across Euclea. In 1921 his party began to grow immensely in size, and he eventually created a militant wing for the party, though he had trouble trying to form it due to the blockages made by Premier José Monteiro and King Lazarus to stop the rise of radical functionalist and far-left parties. His party's ideology was stated to differ from the ones of Gaullica, and instituted much more socialist and syndicalist ideals into his works. His party took the nickname Novanistas, originally a derogatory word used by members of the SPIT, became a commonly used term by Palmeria himself. Palmeira's party saw the support of many well known figures, including religious leaders, businessmen, and the most notable, then Princess and heir Roberta. Roberta had become indulged in functionalism, and eventually met with Palmeira in 1921, and became close friends with him. Palmeira eventually met a close friend of Roberta, Francisca Fraga, who was well-known for being one of the first female train engineer in Paretia, he became very close with her and they eventually married in 1922. In October 1921 the death of Lazarus lead to the rise of his daughter to the crown. Being a supporter of functionalism she attempted use her power to aid Palmeira on many occasions, but many of these were blocked by Premier Monteiro. In the 1922 election, the PNNP saw massive growth, becoming the 4th largest party in the country and won many seats.

Palmeira considered this to be a great victory for his party, and would expand his party's strength and eventually called for his members to stop the socialist SPIT. The election also saw the election Duarte Bonefacio to Premier, who was much more docile when it came to the PNNP, and did little to stop Roberta's policies and Palmeira's influence. Over the next months the PNNP had become very emboldened and began to hold counter-protests to disrupt the rallies of other parties.

In 1923 Roberta II would officially join the party, she then would become the leader of the women's section of the party and started holding rallies of her own in support of Palmeira. During this time an opposition of moderates, liberals, and democratic socialists, lead by Xulio Sousa, known as the Democratic Party of Paretia, would rise to popularity as opposition to the PNNP and SPIT.

In 1924 Palmeira began to have PNNP rallies nearly constantly. Violence became a more common tactic in the party within the year before the election, the largest site of violence was in Burgo Coroa in 1924, where Palmeira held a rally at the same time as an SPIT rally, the insuing street brawl would kill over 130 people. After this event Premier Duarte Bonafacio arrested dozens of leading members of the PNNP's militant wing. Palmeira began to use rhetoric against Bonafacio's "anti-Paretian" government, further anger from the monarchy of Roberta II, and the military command lead to the eventually release of the arrested PNNP members. However the violence began to swing people away from the PNNP.

The Democratic Party of Paretia was beginning to gain appeal, Sousa's call for pragmatic and catch-all approaches to Paretia's issues was beginning to convince many from the extremist parties. Palmeira stated at a rally that he "admires Senhor Xulio Sousa, he is a great speaker like me, he knows what his supporters want, and so do I with you. Unfortunately, his appeal is towards an ineffective solution to our nation's problems, they are not strong policies. And his followers, many believe in subversive ideology that's goal is destroying our great nation, ideology that sacrifices nation and people."

Palmeira giving a speech upon his appointment to Premier

In 1925 the election was becoming extremely close between the PDP and the PNNP, violence began to escalate. The election was held in August and the PDP would come out just barely over the PNNP, Palmeira did not accept the results and claimed the position. Roberta II refused to appoint Sousa to Premier, however she eventually would when the Senado threatened to take away much of her powers in order to get Sousa in. Sousa would only be Premier for a short time.

On October 29th, 1925 the PNNP, its militant wings, pro-Palmeira military, and the monarchy lead a coup to oust Sousa from his officer, it was successful and many members of the PDP were arrested, members of other parties like the SPIT or AR-SRP would be executed. Sousa and many PDP members would be exiled by Roberta II to Etruria. Roberta II would then appoint Palmeira to Premier on November 7th, Palmeira would ban all other parties and officially make Paretia into a functionalist state.

Palmeira would deal with resistance groups early on, mainly they were supporters of the PNNP that were in the military, or militant members of the SPIT. Palmeira would visit with and meet the functionalist leaders of Gaullica, including Rafael Duclerque and Albert IV. He declared Paretia to be an ally of Gaullica. 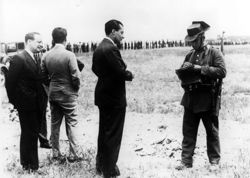 Palmeira with members of the National Guard, 1926

One of the first policies of Carlito Palmeira was the creation of a sole legal trade union known as the Sindicato Unido de Paretia, which was meant to "harmonize" relations between the worker and the employer, which all were required to be a member of once employed, it was under full control of the state. All other trade unions were banned and dealt with swiftly by the government. The first policies of the syndicate was the passing of labor laws for workers, however it also banned striking, as well as restrictions on the firing of workers by employers.

The government would create mass public projects, mainly infrastructure and defense-oriented. Some of these smaller projects would be dealt with by the Youth of the New Paretian Nation, the sole legal mass youth movement in the country, which was directly correlated with the party.

The state of Palmeira maintained close relations with the Solarian Catholic Church during it's rule and pushed for the expansion of the influence of Catholicism in the country, however when the Great War broke out and Etruria joined the Grand Alliance, relations between the two became difficult. It would cut all government ties with Amendist religious groups that existed. The government would begin to repress smaller faiths such as Irfan, Badi, and Sapientianism. It would ban religious groups of these faiths as well as demolish their places of worship.

The Palmeira government greatly increased military funding as global tensions were on the rise, Palmeira's commanding military officers, such as Chief General Ramón Serrato Andujar, would be tasked in the modernizing of the military, especially the navy and air force.