The Catica First Nations are indigenous peoples of the Western Euronia who are composed of many nations and tribal affiliations, each with distinctive cultural and political identities, but they share certain beliefs, traditions and practices, such as the centrality of animals as a resource and spiritual symbol, and many cultivation and subsistence practices. There are 129 recognized First Nations governments or bands spread across Zamastan, roughly half of which are in the provinces of Zian, Jade, and Pahl. Some nations within this conglomerate posessed large territorial holdings and created large cities. The city of Tofino, for example, was constructed and inhabited by the Tofin Peoples. The Catica Empire, which existed from 300 AD to 1480 AD, was the result of massive military campaigns and diplomatic annexations across Western Zamah St'an. 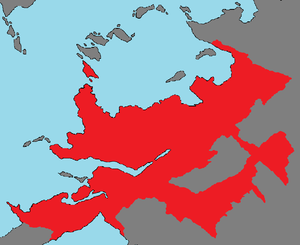 The Catica Empire at its height in 700 AD

The Western Euronia Coast at one time had the most densely populated areas of indigenous people ever recorded in Zamastan. The land and waters provided rich natural resources through cedar and fish, and highly structured cultures developed from relatively dense populations. Within the west, many different nations developed, each with their own distinct history, culture, and society. Some cultures in this region were very similar and share certain elements, such as the importance of fish to their cultures, while others differed. Prior to contact, and for a brief time after colonization, some of these groups regularly conducted war against each other through raids and attacks. Through warfare they gathered captives for slavery.