Nortua is the fourth-largest of five continents located on the planet of Iearth. The vast continent is bounded by the Olympic Ocean to the east, the Northern Ocean to the north, and the Samson Ocean to the west. It is bisected from Adula to the south by the Epsilon Sea, Nortua Sea and Yn Syth. It is the second least populated continent after Antartique, largely due to its size and generally harsh climate that parallel's its northern latitude. It has the northernmost permanently inhabited place in the world, at latitude 82°30'05" north, 817 kilometres (508 mi) from the North Pole, located at Recon Percilius Joint Research Station on Percilius Jacobeir Island in New Anea.

Nortua has an area of 17,840,000 square kilometers (6,890,000 sq mi). Its population as of 2018 has been estimated at more than 423 million. Birnir is the largest country by area, with it also being the most populous at just over 73 million. Most of the population of Nortua lives near the continent's western or southern coasts while the interior and northern coasts are sparsely populated.

The continent's cultural and ethnic outlook has its origin with the interaction of indigenous peoples with Adulan conquerors and immigrants. 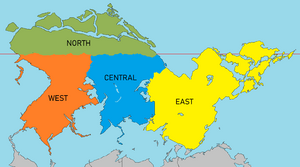 Nortua, the second-smallest continent after Antartique, is divided into four regions; East, Central, West, and North.

The East spans along the entire coast of the Olympic Ocean from Greland to the Arenoran Isles. Consistent of many large regions of flat, heavily forested plateaus interconnected in varying degrees of elevated hill and mountain ranges, before descending into a lengthy north-south low relief along the coast. The region's average elevation is less than 900 meters above sea level and extends inland from the ocean, with the coastal plain is normally wet, including many rivers, marsh, and swampland. It is composed primarily of sedimentary rock and unlithified sediments and is primarily used for agriculture.

The climate of East Nortua varies greatly across its lengthy span. The majority of the region from south to north has a humid continental climate. In the inland continental region, specifically Besmenia and Candatora, the winters are long and cold, and heavy snow is common (most locations receive 60 to 120 inches (1,500 to 3,000 mm) of snow annually in this region). The summer's months are moderately warm, though summer is rather short and rainfall is spread through the year. In more eastern areas, specifically Versenia, Kyti, Lovinali, North Shebat, and South Shebat, the same humid continental prevails, though summers are warm to hot, winters are shorter, and there is less snowfall (especially in the coastal areas where it is often warmer).

The northern archipelago lies in the mid-temperate zone to the subarctic zone, and although areas like Elbresia and Saint Offeat are almost entirely surrounded by water, the climate is closer to continental climate rather than maritime. The winter and summer temperature extremes of the continental climate are moderated by the ocean. However, winters are cold enough to be classified as continental—still being nearer the freezing point than inland areas to the west. Areas not on the Olympic coast experience warmer summers more typical of inland areas, and winter lows are a little colder.

Central Nortua can sometimes be divided into two regions; the Shield in the north, and the Bowl in the south.

The Shield is overwhelmingly located on a large rock base mostly consists of eroded hilly terrain and contains many lakes and important rivers used for hydroelectric production, particularly in northern Utobania and southern New Anea. The Shield also encloses an area of wetlands around the Bay of Laitstadt. Some particular regions of the Shield are referred to as mountain ranges, including the Arngat and Moraitian Mountains. The Shield cannot support intensive agriculture, although there is subsistence agriculture and small dairy farms in many of the river valleys and around the abundant lakes, particularly in the southern regions. Boreal forest covers much of the shield, with a mix of conifers that provide valuable timber resources in areas such as the Central Shield forests ecoregion that covers much of the region. The Shield is known for its vast mineral reserves such as emeralds, diamonds and copper.

The Bowl is part of a vast sedimentary plain covering much of the region, as well as much of the Taiga and Boreal region between the divides of the East and West Nortuan regions. The plains generally describes the expanses of (largely flat) arable agricultural land which sustain extensive grain-farming operations in the southern part of the region. Despite this, some areas are quite hilly and the prairies contain large areas of forest such as the Mid-Continental Nortuan forests.

The geography of the West is extremely varied. Notable are the Birnir fjords, the Chezian Mountains, the flat, low areas in the basin spanning from Constantio to Vuswistan and the archipelagos of Karabakhi. The region has many lakes and moraines, legacies of the ice age, which ended about ten millennia ago. The southern regions of the West, which are also the most populous regions, have a temperate climate. The West extends just south of the Northern Circle, but has relatively mild weather for its latitude due to the Samson Ocean. Many of the West Nortuan mountains have an alpine tundra climate. The climate varies from north to south and from west to east: a marine west coast climate (Cfb) typical of western Nortua dominates in Karabakhi, southernmost part of Birnir and along the west coast of Birnir reaching north to 65°N, with orographic lift giving more mm/year precipitation (<5000 mm) in some areas in the region. The central part – from Constantio, Syraranto, and Vuswistan – has a humid continental climate (Dfb), which gradually gives way to subarctic climate (Dfc) further north into North Icadania and New Ansion. The Birnir Mountains block the mild and moist air coming from the southwest, thus the northern plateau in West Nortua receives little precipitation and has cold winters.

The North region is a unique area among Iearth's ecosystems. The cultures in the region and the north indigenous peoples have adapted to its cold and extreme conditions. Life in the northern region includes zooplankton and phytoplankton, fish and marine mammals, birds, land animals, plants and sparse human societies.

The North is characterized by cold winters and cool summers. Its precipitation mostly comes in the form of snow and is low, with most of the area receiving less than 50 cm (20 in). High winds often stir up snow, creating the illusion of continuous snowfall. Average winter temperatures can go as low as −40 °C (−40 °F), and the coldest recorded temperature is approximately −68 °C (−90 °F). Coastal North climates are moderated by oceanic influences, having generally warmer temperatures and heavier snowfalls than the colder and drier interior areas. The North is affected by current global warming, leading to Northern Ocean ice shrinkage, diminished ice in the New Anea ice sheet, and North methane release as the permafrost thaws. The melting of New Anea's ice sheet is linked to polar amplification.

There are multiple international organizations that are located in Nortua, including the Alliance of Nortuan States (ANS) and the Sotoan Basin Union (SBU).