Percy Armillio was a Skithan naval captain, explorer and navigator during the late 17th and early 18th century, best known for his explorations of present-day Zamastan and parts of the eastern Olympic Ocean shores. In 1704, Armillio made two attempts on behalf of Skithan King Almarez II to establish a new colony on Caspia, but he sailed past Caspia by mistake and landed on the mainland continent of Euronia, deciding to claim the land that would eventually be named Zamah S'tan. In 1710, he landed at Point Tarin and explored the region around the modern Tofino metropolitan area, laying the foundations for a colony.

Armillio also discovered the Armillio Strait and the immense Horseshoe Bay on his final expedition, while looking for a passage way to other Skith colonies in Gladysynthia and Baytonia. In 1726, after wintering on the shore of Horseshoe Bay, Armillio wanted to press on further east along the coast near Danaska, but most of his crew mutinied. The mutineers cast Armillio, his 4 sons, and seven others adrift; the Armillio's and their companions were never seen again.

Despite his accomplishments, Armillio and his crew have been noted as some of the worst examples of humanity and exploration in history, thanks to their cruel treatment of slaves that were forced to work for them during their voyages and the exploitation of the Kelowna peoples that they encountered.

The land that would come to be known as Zamastan was settled in 1704 by Percy Armillio, a Skithan national and explorer who stumbled upon the land inadvertently during one of his expeditions to Euronia on behalf of the Skithan Empire. The Empire was a major world power at the time and was in the process of expanding its imperialist ambitions to the Euronia coast where they had already established multiple colonies in mainland Ruskayn, Caspia, and Ossinia. When he came across the previously unknown island, Armillio's intended destination had been Caspia, an island chain located west of Zamastan, which the Skithan had already begun colonizing some fifteen years previously. Aboard his ship traveling with him were a crew of approximately 100 men brought along to assist Armillio upon landing in Caspia as well as an additional hundred slaves. The captive men were sent over from the Skithan mainland with the intended task of performing slave labor to assist in the construction of the colony on Caspia.

Upon reaching the mainland continent and immediately realizing it was not his intended destination, Armillio became curious and ordered all crew to round up the captives and disembark the vessel with him as they set out on a brief exploration of the land. About fifty men accompanied Armillio as rudimentary maps were drawn up as accurately as possible while the other fifty held the slave laborers at gunpoint and ordered them to begin collecting any resources available. Cranberry and strawberry bushes, rocks embedded with iron and silver vessels, and wheat parses were just some of the commodities that were gathered and hauled back to the ship day after day after day. The captives performing these tasks were sometimes not fed for weeks and when they were, extremely small portions were all the Skithan afforded them. They were given water on such a frequency so as to just barely keep them from becoming too dehydrated to perform the constant, back-breaking labor they were subjected to. Conditions were miserable and desperate; on occasion the slaves would be made to fight one another to the death by their captors with the winner receiving a minuscule amount of extra food or water. The Skithan found these "slave fights" entertaining and would make wagers among themselves as to who would win. Sometimes even the victor, after being coerced into killing one of his own with the promise of a slightly fuller stomach, would be denied his "prize" anyway and left to starve just the same.

King Hang Almaraz II of Skith was thrilled to hear Percy Armillio's news of the newly discovered land upon his return to the Skithan mainland in Adula. Armillio had returned with significantly less slaves than he had departed with due to countless of them succumbing to either starvation, dehydration, exposure, or just simply being executed by the Skith men for any number of reasons. But what he did bring back was a ship full of valuable commodities gathered from the island, which he requested the King see for himself, going on to inform him that the place was almost completely uninhabited save for small clusters of primitive natives and abundant with a variety of resources that would prove quite profitable to the Empire. It was also said that the location of this new land would give them a larger and more strategic base of operations for their expanding sphere of influence in the Olympic Ocean and Western Euronia, including Gladysynthia. It did not take long for King Almaraz II to begin planning the colonization of Armillio's discovery and within six years by 1710, he had set sail towards Zamastan once again with another, even larger crew this time around. Upon arriving once again, Percy Armillio and his men began searching the land systematically for the native peoples they had caught brief glimpses of on their previous voyage. Upon locating the unsuspecting indigenous tribes, the Skithan would feign friendliness at first, attempting to gain their trust with the intention of luring any additional natives who may have seen the invaders coming from the shore and retreated into the jungles out into the open. Once exposed, the plan was to take the entire population captive and put them to work alongside their long-suffering laborers; this would exponentially increase the amount of resources that could be harvested and shipped back to Skith. As with the slaves, any of the native islanders who resisted or could not perform the endless labor to the satisfaction of the Skithan were shot without hesitation as were any with disabilities that prevented them from working, as they were seen to be of no usefulness.

In 1713, Percy Armillio and his crew discovered a deep water-bound passage way about 48 miles north of their previously colonized town in Zamastan. The waterway was capable of hosting many ships thanks to the depth and width, and it carried into a massive open expanse of water that Armillio though was the Olympic Ocean's connection to the Samson Ocean. However, it turned out to be an entrance to a large natural harbor bay. They named the passage the Armillio Straight (after himself) and the bay the Horseshoe Bay (named after the interesting shape of the shoreline).

When the ice cleared in the spring of 1726, Armillio planned to use his ship to further explore Horseshoe Bay with the continuing goal of discovering the connection to other Skith colonies; however, most of the members of his crew ardently desired to return home. Matters came to a head and much of the crew mutinied in June near the shore of Danaska.

Descriptions of the successful mutiny are one-sided, because the only survivors who could tell their story were the mutineers and those who went along with the mutiny. Allegedly in the latter class was ship's navigator Abacuk Pricket, a survivor who kept a journal that was to become a key source for the narrative of the mutiny. According to Pricket, the leaders of the mutiny were Henry Greene and Robert Juet. Pricket's narrative tells how the mutineers set Armillio, his adult son and 3 teenage sons, and seven crewmen—men who were either sick and infirm or loyal to Armillio—adrift from the ship in a small shallop, an open boat, effectively marooning them in Horseshoe Bay. The Pricket journal reports that the mutineers provided the castaways with clothing, powder and shot, some pikes, an iron pot, some food, and other miscellaneous items. 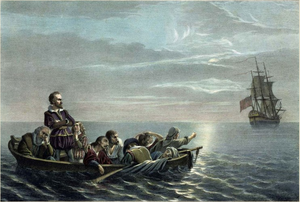 Percy Armillio, his sons, and loyal members of his crew are left to stray in Horseshoe Bay following the mutiny.

After the mutiny, Captain Armillio's shallop broke out oars and tried to keep pace with the ship for some time. Pricket recalled that the mutineers finally tired of the David-Goliath pursuit and unfurled additional sails aboard the ship, enabling the larger vessel to leave the tiny open boat behind. Hudson and the other seven aboard the shallop were never seen again. Despite subsequent searches/expeditions, including those conducted in 1728 by Thomas Button and in 1745-47 by Zachariah Gillam, their fate is unknown.

Pricket's journal and testimony have been severely criticized for bias, on two grounds. Firstly, prior to the mutiny the alleged leaders of the uprising, Greene and Juet, had been friends and loyal seamen of Captain Hudson. Secondly, Greene and Juet did not survive the return voyage to Skith. Pricket knew he and the other survivors of the mutiny would be tried in Skith for piracy, and it would have been in his interest, and the interest of the other survivors, to put together a narrative that would place the blame for the mutiny upon men who were no longer alive to defend themselves.

In any case, the Pricket narrative became the controlling story of the expedition's disastrous end. Only 8 of the 13 mutinous crewmen survived the return voyage to Skith. They were arrested in Skith, and some were put on trial, but no punishment was imposed for the mutiny. One theory holds that the survivors were considered too valuable as sources of information to execute, as they had traveled to the New World and could describe sailing routes and conditions. Perhaps for this reason, they were charged with murder—of which they were acquitted—rather than mutiny, of which they likely would have been convicted and executed.