The Kingdom of Cote De Mayotte is a Constitutional Monarchy located on an archipelago off the northern coast of Corentia on Sunalaya. Per the last census conducted in 2016, Cote De Mayotte has a population of 27 Million. Founded in 1846 on the big island of Mayotte by Francois I De May the island nation quickly established itself as the dominant nation on the Cote archipelago. An initial isolationist culture, the Mayonne people gradually grew more technologically advanced and the invention of the Yadril Strain of Maze soon caused a population boom on the island, leading to overcrowding.

Under the Reign of Phillip I De May Mayotte thrived and continued to grow. It was under Phillip I's reign that the Wars of Unification began, the Imperial conquest of the rest of the Cote Archipelago. Utilizing the vacuum of power created by the Librira civil war, Phillip I swiftly annexed the Islands of Étretat, Tromelin, Glorioso, Nay, and Manosque. These Islands, now subjugated became part of the new nation Cote de Mayotte. Within 4 years, the death of Phillip I brought about a succession crisis leading to the establishment of the current Imperial family L'Iveal. Under the reign of Francois II L'Iveal, the establishment and ratification of the Imperial Constitution was achieved bringing power to the people of Cote de Mayotte.

The Peace and prosperity brought about by the unification of Cote de Mayotte heralded a renaissance period in the nation. A flurry of art, architecture, and writing spurred this golden age. Spurred on by war profiteering throughout the 2nd Global War in which Cote de Mayotte traded with both sides of the conflict, this golden age lead to the firm establishment of the nation as a Strategic regional power.

Today, Cote de Mayotte is regarded as one of the top tourist destinations in the region for its pristine beaches and claims a strong military and commercial shipbuilding industry. Environmentally and Economically, Cote de Mayotte is rich in fishing and oil which lie in vast untapped reserves within its territorial waters.

The term Mayonne stems from the first Imperial family of De May which was established on the big Island of Mayotte in 1846. Through the Imperial conquests of the surrounding islands and their people, 'Mayonne' came to symbolize all the people of this wealthy and industrious nation.

The Government of Cote de Mayotte, is a Constitutional Monarchy ruled by the L'Iveal family. It consists of three main branches to form the central Imperial Government, the Legislative Assemblée Nationale, the Imperial Monarchy, and the Judiciaire. Each branch operates in accordance to the Imperial Constitution of 1903.

Consisting of 350 members, the Assemblée Nationale is the largest political body in the country. With each of its members up for reelection every 4 years, it is also the only route for the public to enact its will upon the direction that the government is going. Touted as one of the most effective legislative bodies in Corentia, the Assemblée, per the Imperial Constitution is in session 10 out of the 12 months of the year.

Paid a salary directly from the Imperial coffers, this body is only allowed to campaign for reelection for a total of one month starting 30 days before the set date for the election. This allows the body to keep its attention only on the issues facing the country as opposed to their own reelection. Each minister represents one Imperial district as drawn up by an independent board as so established by the constitution.

The Assemblée Nationale is nominally controlled by the three largest political parties in the country The Imperial Party, the DeMay Workers Party and the Nationalist Party. The Imperial Constitution stipulates the election of a Prime Minister from the dominant party who is then ratified into their position by the Roi. If the election proves to result in no clear majority then the provision of a minority or coalition government is included in the Constitution.

Among the duties of the Legislative branch is the balancing and formation of the national budget, ratification of Judicial appointments, the creation and passing of Bills. Per the Imperial Constitution, the Assemblée Nationale requires a simple majority to pass a bill, however, the Monarchy and the Judicial branches must both ratify it, with the Judiciary reviewing its constitutionality. If the Bill involves a proposed change to the Constitution then a Majory of no less than 60% is necessary to change it. If either of the other two branches issues a challenge to a bill, the Assemblée has a 30 day window in which to defend the proposed laws in an independent court.

The smallest of the two non royal branches of government, the Judiciary is a body of 13 justices nominated by the Roi, and then ratified by the Assemblée Nationale. Its existence as stipulated by the Constitution is to test the Constitutionality of each Law passed by the Legislative branch. 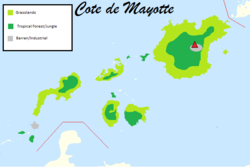 Situated on 4 large Islands and several smaller islands north of Corentia the typical landscape of Cote de Mayotte is a tropical jungle with miles of white sandy beaches. There is one large freshwater lake located in the center of the big island of Mayotte which is a natural spring-fed reservoir found in the corona of Pointe Du Hoc which is the remnants of the old volcano that gave birth to the island chain.

Located just off the northern coast of Corentia Cote de Mayotte is a diverse country of rolling fields and tropical jungles. Most land sits 2-4 meters in elevation above sea level with the highest point in the country being an extinct caldera volcano called Pointe Du Hoc which rises 407 meters above sea level

The Climate of Cote de Mayotte can be best called Tropical, with frequent rains and warm breezy days due to its location. Temperatures range from 22 degrees centigrade in the summer to 7 degrees in the winter. The mildness of the winters allows for a prolonged growing season which has assisted the natural growth of population centers in the Nation.The average yearly rainfall is 58cm with the wettest month being December and the dryest being August and July. Snow is completely unheard of on the islands, however typhoons have been known to hit the island nation.