Every five years, the Ministry of Social Development tabulates the demographics of Lemovicia, in order to better provide services to all Lemovician citizens.

As of the 2017 census, the Lemovician census is 2,502,577 people, which although is the highest since Lemovicia gained its independence from Narozalica in 1979, is still lower than its pre-independence population of 3,257,447 in 1977.

As of the 2017 census, the age distribution of Lemovicia is arranged thusly: 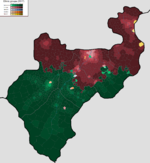 Ethnicity map of Lemovicia as of 2017

As of the 2017 census, the largest ethnic group, at around 52% of the nation's population, or 1,301,340 people, were the Miersans, who are primarily concentrated in the Miersan Entity. The next largest ethnic group are the indigenous Lemovicians, at 43% of the nation's population, or 1,076,108 people, concentrated primarily in the Lemovician Entity, but with sizable pockets in the Miersan Entity.

Officially, Lemovicia has been a bilingual country since 1992, with the two official languages being the language isolate Lemovician language and the Marolevic Miersan language.

Finally, the remainder of the Sotirian population adhere to other sects of Sotirianity, primarily Bogomilism, and Amendist sects.

The remaining four percent of the national population, or 100,103 people, are split roughly evenly, with 50,055 being irreligious, and 50,048 people following other religions, primarily neo-paganism.

As of the 2017 census, 58.24% of the national population, or 1,457,501 people, live in urban areas, which are defined as having a density greater than 500 people per square kilometre, with a minimum population of 1,000 people. Of these, 870,296 people, or around sixty percent of the total urban population live in the ten largest cities in the country.

Retrieved from "https://iiwiki.us/mediawiki/index.php?title=Demographics_of_Lemovicia&oldid=221223"
Category:
This page was last edited on 23 June 2020, at 12:35.
Privacy policy
About IIWiki
Disclaimers